Kenna Zemedkun has launched television shows, carved out his own music genre, created new ways of raising money for the issues he cares about and helped overhaul a social networking site.

Kenna was a businessman before he became a Grammy-nominated artist. Then, he took the best of both worlds to move forward. This now 35-year-old -- whom you may have never heard of -- combined his entrepreneurial instincts and Hollywood connections to galvanize support for clean water advocacy.

Born in Ethiopia, Kenna Zemedkun, known simply as 'Kenna,' moved to the U.S. when he was 3 and has spent much of his life finding solutions to problems that most people either pretend aren't there or do their best to steer clear of. And despite the gravitas of some of the problems Kenna is tackling, he has a lightness in his step and in his spirit that is infectious.

New York Times bestselling author Malcolm Gladwell wrote extensively about Kenna in his 2005 book Blink, arguing Kenna's music - a cross between rap and the British new wave music of the 1980s - failed to gain widespread acclaim in the U.S. because it didn't fit into any familiar category. While music executives loved it, much of the general public found it uncomfortable.

But Kenna has always been about going against the grain -- and his suave, sexy likeability, combined with a hearty dose of nothing-to-lose courage, has made him a life-long change-maker. "I was raised an entrepreneur. My mom is an entrepreneur, my Dad is a finance professor and economist, so it's been a part of my life -- business is a part of my life," says Kenna.

Kenna's first "business," if you can call it that, was buying gum in bulk at Costco and selling it in the halls of his high school in Virginia Beach, Va. Wanting to earn extra cash so he could buy stylish clothes like the cool kids, Kenna figured he could make some money by selling gum to kids after lunch. He made upwards of $50 a week doing it -- and in the process, became one of the most popular kids in school.

Kenna's business prowess caught the attention of the school's literary magazine staff. The magazine was a chronic money pit and Kenna asked for a chance to turn things around. Instead of dryly asking local businesses if they wanted to buy ad space, he impressed upon businesses how important the literary magazine was to the creative contingent of the school. "Pitch was everything," he says. This was pre-cell phone, so Kenna gave the school's phone number out. The principal was shocked at all the calls coming in.

But that was hardly his most lucrative achievement. As a teenager, Kenna was watching The Family Channel (which became Fox Family and then ABC Family) at home in Virginia Beach one day when it struck him: The programming was painfully boring. Kenna wrote up a TV program production description, presented it in a three-ring binder, put on his best pair of khakis and rode his bike to local Family Channel offices, where he proceeded to wait until CEO James Ackerman was available to see him. (He knew Ackerman's name from the credits.)

Ackerman eventually -- and largely by accident -- heard Kenna out, politely rejected his pitch and saw him to the door. Just before leaving, Kenna turned and said very directly, "My mom, my dad, me and my sister -- we are a family. And we don't watch The Family Channel. And that's a problem." Ackerman balked.

Kenna asked to meet with a producer and Ackerman asked for a name. As it so happened, Kenna had met a Family Channel producer at a local Chick-fil-A a couple of weeks earlier, talked him up and gotten his business card. Kenna whipped out the card. Baffled and impressed, Ackerman set up a lunch between Kenna, the producer and another staffer.

The meeting was fortuitous; the network ended up hiring then 15-year-old Kenna as a creative producer. Kenna wrote two scripts and the Family Channel bought them both.

"That's how I bought my first house," says Kenna. He was 17 at that point. "That was the beginning of my life. That was when I was like, I can do anything, anywhere, at any time."

Looking back over the past decade and a half, 17-year-old Kenna wasn't far off. 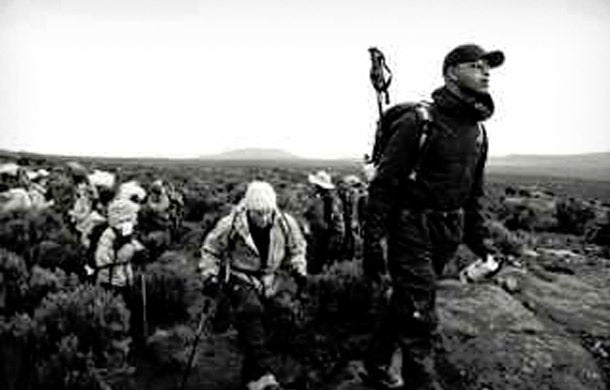 Building new models: "I am a fixer," says Kenna.

Kenna's infatuation with music began with his love of Michael Jackson but was cemented when he heard the U2's Joshua Tree album. Kenna taught himself to sing, taught himself how to play the piano and put together his own first songs and made a demo CD in Virginia Beach. The CD -- through a series of lucky coincidences -- fell in the hands of a music scout who took it to the head of Atlantic Records in New York City. The CD also ended up in the hands of the producer for the lead singer of the band called Limp Bizkit, who loved it, and later in the hands of a producer for U2, who also loved it. Kenna walked to the MTV2 offices and dropped off his CD and his own, home-produced music video. MTV2 ended up playing the music video almost 500 times. When the ultra-hot club The Roxy in Los Angeles had a last minute cancelation, Kenna got a call to perform live. With half a day to advertise, he sold out.

Related: Artists Are Job-Creating Entrepreneurs, Too.

Kenna released New Sacred Cow (2003, Columbia) and Make Sure They See My Face (2007, Interscope) and was nominated for a Grammy in 2009 for the song "Say Goodbye to Love." He has shared the stage with his close friend and music legend, Justin Timberlake. "Gum turned into TV turned into music," says Kenna of his windy, unpredictable entrepreneurial career.

Kenna became increasingly frustrated with the politics of signing with music labels, and at the same time, he also became aware that his father was working to save $10,000 to build a clean water well in his home village in Ethiopia. Both worked simultaneously to change Kenna's focus. His father, who Kenna affectionately calls the Ethiopian Bill Cosby, suffered with waterborne illnesses for most of his childhood.

To galvanize support for the clean water movement, Kenna got Hollywood moving. Literally.

In 2010, Kenna climbed Mount Kilimanjaro with a group of musicians and actors, broadcast each step of the journey on social media and leveraged each celebrity's ability to connect with different segments of the population. Hikers included actors Jessica Biel, Emile Hirsch, Isabel Lucas, rapper Lupe Fiasco and singer-songwriter Santigold. The climb, called Summit on Summit, raised awareness and funds for the need to bring clean drinking water to people around the world.

Kenna organized a single moment on Twitter where countless celebrities tweeted at once, and the single tweet effected an automatic change of profiles backgrounds and avatars (a feature that Twitter co-founder Jack Dorsey has since banned).

Kenna is also working to give aspiring musicians resources in the digital world. Longtime pal Justin Timberlake asked Kenna to help him relaunch the social networking platform in 2011, joining as chief vision officer and lead creative. Kenna wants the platform to become relevant again and provide artists with the digital tools necessary for them to distribute their work in one place -- a function that Kenna says was not available when was starting out as a singer-songwriter.

Kenna's ability to get local businesses to buy ad space in his high school's literary magazine and his ability to get some of Hollywood's hottest celebrities to climb the tallest peak in Africa come from the same part of Kenna's personality: his ability to talk to and connect with almost anybody. That's precisely why Kenna's various corporate activities are grouped under Kenna's umbrella organization, The Translator.

"For the most part, I live as a translator. I spend a lot of time communicating things that are already said differently so that people understand them," says Kenna. "I think that probably is my gift, at the end of the day, is helping translate."