Is Every Entrepreneur a Bit of a Daredevil? Sir Richard Branson Thinks So.

Branson, perhaps the world's most well-liked entrepreneur and certainly among the best known daredevils, praises all who take risks joyfully.

Sir Richard Branson is no stranger to adventure. His entrepreneurial ventures include a record label, a number of highly successful transportation lines, a comic and animation company, a health bank, and more. During his free time he's the opposite of idle; Branson is a skilled kitesurfer, skydiver and sailor. For Branson, there's always a world record to break.

You can be a David versus a Goliath, if you do it right. – Sir Richard Branson

Of course, the most suspenseful of Branson's adventures involves a precarious flight across the Atlantic in a balloon. In an effort to share his story, Branson has teamed up with Sundog Pictures and acclaimed director Daniel Gordon to create the documentary Don't Look Down. The film not only perfectly captures Branson's experience, but also outlines how he's used his "daredevil" side to his advantage to succeed in the business world.

Through his books, Sir Richard Branson has been an incredible mentor to my brother and me. We've considered the lessons from Virgin Rebel and Business Stripped Bare in order to make a number of our business decisions. As such, it was a true honor to be able to speak with Branson last week about Don't Look Down. We discussed his adventurous upbringing, the strength it takes to never give up, and more.

Toren: While I was watching the film Don't Look Down, I kept thinking to myself, "Wow, Richard truly doesn't see fear the way the rest of us do." Your mom, Eve, said that your upbringing was to think of other people, but fear, anger, and jealousy needed to be squashed. What were some of the things your mom and dad did to instill these qualities in you?

Branson: They wouldn't let us watch television; we had to be active. They would push us out of the car and tell us to make our own way to Grandmother's house. They would put us on a bike in the pouring rain and make us ride a couple hundred miles to the seaside. They would much rather we were climbing trees and rescuing cats than sitting inside. [Mom and Dad] wanted us to be, in a nutshell, doing things rather than watching other people doing things.

Toren: What would you say was the most important thing you learned during your experience in the balloon? How has that affected your following business decisions?

Branson: You have to stay calm under fire -- and sometimes literally under fire. If you're facing death, you've got two choices: one is curling up and giving up, and the other is fighting to survive. Actually, [I was] an entrepreneur before the balloon trip, and I often had to fight to survive in business. That was very helpful when it came to fighting to survive in the balloon. And you've just got to do everything you can to think, think, think, and give yourself the best chance at getting out of a precarious situation. And then you need a lucky star above you to guide you home. We were fortunate to have a lucky star above us to guide us home. 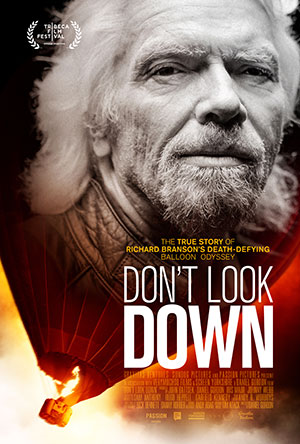 Toren: Do you feel that every entrepreneur needs to be a bit of a "daredevil" or "adventurer" to succeed?

Toren: I think that aspiring and seasoned entrepreneurs will really resonate with the film. What do you hope Don't Look Down teaches the latest generation of entrepreneurs?

Branson: Never to give up, even if it sounds slightly corny. Fight, fight, fight to survive. If you fight to survive and you don't, pick yourself up the next day and keep trying until you do succeed. I think the same applied when the balloon fell apart when we were about to cross the Pacific. We did not give up, and instead we built another one and came back the next year. We carried on until we were successful. After the Pacific, we decided it was too much to continue, but we went on to do more adventuring around the world. We ended up finally crashing into the Pacific, which we narrowly avoided before. But we still haven't given up in our quest to go around the world one day. Maybe one day in my 70's or 80's we will finally achieve it.

Branson: It started as a publicity-driven adventure, but very quickly [the ballooning] became a very personal adventure. Space is the frontier that we're trying to crack now, and I'm in training for our space program, which is nearly back on track. And I hope to be going intergalactic in the not-too-distant future. That will be a combination, I suppose, of many different adventures that involve many different people in the years to come.

Branson is an excellent example of an entrepreneur who started from scratch, never gave up on making his dreams a reality (even after several failures and successes), and had fun along the way. No matter what obstacle you face—whether it's balloon- or business-related—keep your eye on that lucky star, and don't look down.

Fun is one of the most important -- and underrated -- ingredients in any successful venture. If you're not having fun, then it's probably time to call it quits and try something else. – Sir Richard Branson