The GOAT gave it her all at Wimbledon. She didn't clinch the title, but everyone can learn from how she handled it like a champion.

The Wimbledon women's final over the weekend came down to Serena Williams and Germany's Angelique Kerber. Williams was aiming for a 24th Grand Slam singles title, but in the end, it was Kerber who emerged victorious, earning her first Wimbledon title.

After the two players embraced and Williams congratulated Kerber on her achievement, she gave a moving post-match interview that is a prime example of how to find a win even in a tough loss. 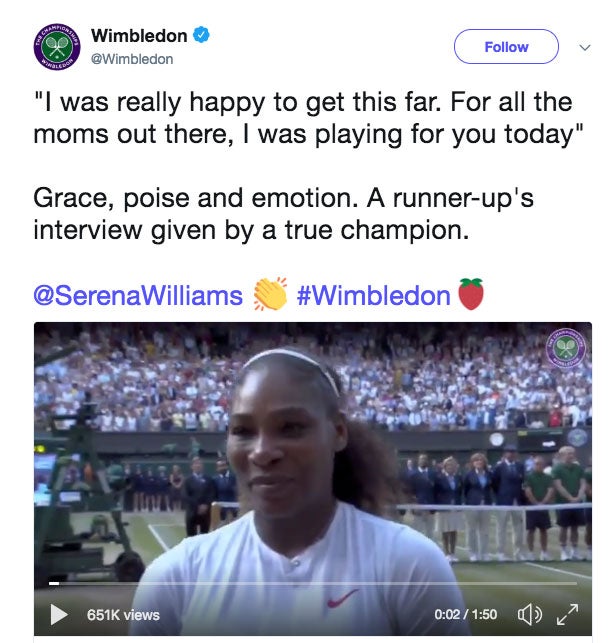 "It was such an amazing tournament for me," Williams said. "I was really happy to get this far. It's obviously disappointing, but I can't be disappointed. I have so much to look forward to, I'm literally just getting started."

When asked about the appearance of being "superhuman, super mom," she laughed.

"I'm just me, that's all I can be," she replied. "To all the moms out there, I was playing for you today. And I tried, but Angelique played really well. She played out of her mind. I look forward to continuing to be back out here and doing what I do best."

Wimbledon was Williams's fourth tournament since giving birth to her daughter Alexis Olympia. In February, Williams wrote an essay for CNN about the nearly fatal complications she experienced after childbirth, including a pulmonary embolism and blood clots that led to a series of surgeries, and a recovery that required six weeks of bed rest. In the essay, she advocated for other women who don't have access to the quality of care that she did.

At a Wimbledon press conference earlier in the tournament, Williams was asked what it was like knowing that her opponents would always be bringing their A-game because she was Serena Williams.

I asked Serena Williams if she minded always being the one to beat.
Her answer blew me away. #Wimbledon @serenawilliams @Wimbledon pic.twitter.com/XsHI26FSi4

"Every single match I play, whether I'm coming back from a baby or surgery, it doesn't matter, these young ladies bring a game that I've never seen before. And it's interesting because I don't even scout as much because when I watch them play, it's a totally different game then when they play me," Williams explained. "That's what makes me great, I always play everyone at their greatest, so I have to be greater … now my level is so much higher because of years and years of being played like that. If it wasn't high, then I wouldn't be who I am. I had to raise my level to unknown because they are playing me at a level that's unknown."

Given that answer, it won't come as a surprise that Williams isn't dwelling on the Wimbledon loss. She's already strategizing and training for the U.S. Open. Because when you know that you can strive for heights you have never seen before, a setback is only fuel for the next big success.

These past 2 weeks was a sound for all moms stay home and working you can do it you really can! I'm not any better or diff than any of you all. Your support has ment so much to me. Let's keep making noise everyday in everything we do. #roadtoUSOpen pic.twitter.com/5OLYk1a6cK