By focusing on it vision, Candylabs, which makes wooden toy cars, has been profitable from its start and has seen 40 percent year-over-year growth.

If you just read the buzzwords -- "3-D printer" "makerspace" and "Kickstarter" -- Vlad Dragusin's company Candylab Toys could sound like a lot of Brooklyn startups. Except his company doesn't maintain an app or deliver laundry on demand -- it sells wooden toy cars.

That's right -- just wooden cars. No virtual reality. No augmented anything. Just simple, charming heirloom cars. To be fair, these are a step beyond what you might have had in your toy box as a child. Think: 1965 Land Rovers, Airstream trailers, "60s muscle cars and Mopar racers.

Related: The Most Popular Toys During the Holidays Since 1983 (Infographic)

Growing up in Romania, Dragusin developed a love for hot rods and classic American car design. Candylab's toys showcase that passion with cars designed to the smallest details -- from the placement of the headlights to the tread on the tires and choosing just right shades of blue or green.

Of course, getting such high-design cars to market isn't as simple as you might think. Their precise angles and cross-grain cuts weren't always easy to support by traditional tools.

Related: Barbie Is a Hologram and Now Even Playtime Is Automated

So Candylab would use 3-D printing technology to create not just its prototypes but the tools and jigs that manufacturers would need to produce them, tinkering at New Lab, a Brooklyn makerspace for manufacturers with both large format 3-D printers and a woodshop. "We have to physically make our tools and jigs here, put them in our luggage and ship them out with us," says Dragusin, a trained architect.

The result is a toy that stands apart -- one that's rugged enough for an 8-year-old to race and elegant enough for a car-loving grandfather to show off on his desk. This attention to design has helped Candylab find key retail placement in high-design spots like Colette in Paris and The Design Museum in London and raise approximately $700,000 through a series of Kickstarter campaigns. The company has been profitable from its start and has seen 40 percent year-over-year growth.

In this interview, we talk to Dragusin and his industrial designer, Kaeo Helder ahead of the company's holiday toy launch. We chatted about the challenge of building an iconic product, why so many don't take on that challenge and how it can work as a business strategy.

This interview has been edited for clarity and condensed. 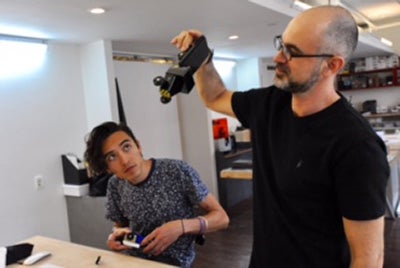 Entrepreneur: What's important when you're designing a new car?
Dragusin: The product on its own has to be appealing enough, has personality and attractiveness to that particularly fresh blank slate -- which is a child's mind -- so that they they feel attracted to it and then they create their own story. Creating their own story is critical to us. Everything that we're trying to do is geared towards that.
Helder: It's finding that happy balance between something that is iconic while still being simple enough. That gives the product a certain longevity, because you're pulling from icons that are already established and have proved themselves to be long lasting. The design will last. It's already proven itself. So you have that foundation you can use that as a prototype.

Related: The Ken Doll Got a Makeover (and a Man Bun). Here's What it Teaches Us About Buzz.

Entrepreneur: The toy business is fickle but iconic toys -- Barbie, LEGO -- have a chance at longevity. Still, new icons are hard to find. Why?
Dragusin: Humanity has much more cultural angles these days and the landscape is much more crowded than it was back in the day. So, I don't think there's necessarily going to be a clear-cut icon for kids just because there's there's many more interpretations of what that is. 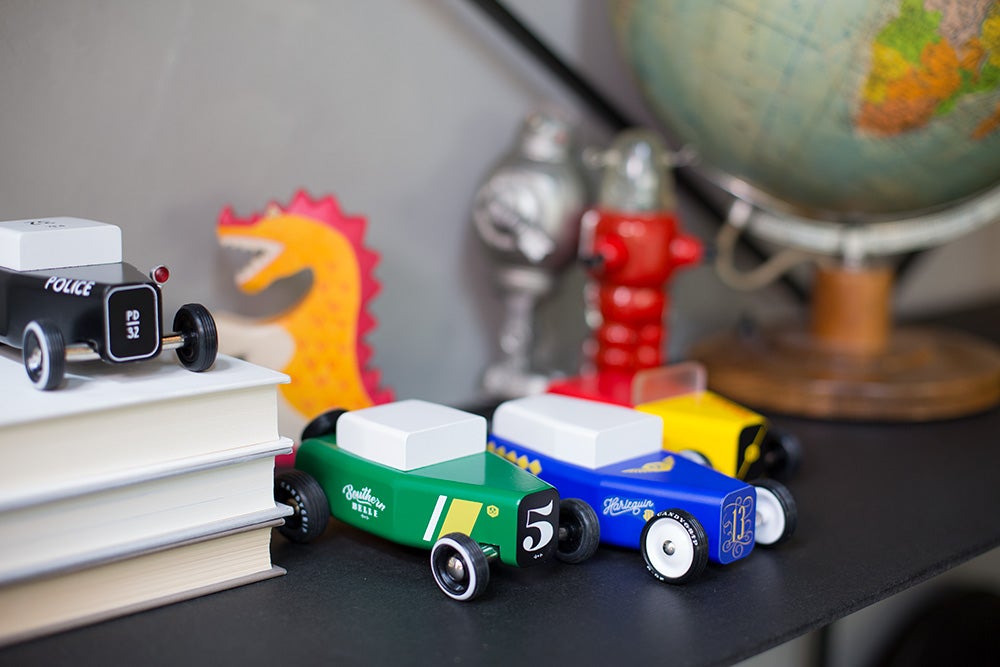 Entrepreneur: Isn't manufacturing its own hurdle, though? You've discovered that innovating using classic materials wasn't all that easy.
Dragusin: Wood toys are pretty simple actually. They're mostly 2D stuff: sticks, flat surfaces, painted whatever, glued together. The manufacturing techniques never have to be upgraded. It's self-reinforcing, because the demand is not there. It takes a lot to shake manufacturing out of its inertia and say, "But wait. We need this to be made."

Related: Bill Gates Takes Credit for a Classic Microsoft Game Coming Back, and We're Not Sure If It's a Joke

Entrepreneur: And some of your vendors aren't making dollhouses or little trains.
Dragusin: Our silicon provider, does high-tech consumer products, like the buttons on a cell phone.
Helder: In our new range of cars, Outlaws, we have an axle piece that's a bent metal tube that's actually really difficult to do. And that company manufactures car brake parts.
Dragusin: They're an actual automotive supplier. In a more traditional manufacturer business, everything's plastic. You can mold anything in plastic. You don't have to go to a metal stamping factory that supplies General Motors.

Related: Lego's New Robotics Set Will Teach Your Child How to Code

Entrepreneur: What else stands in the way?
Dragusin: Design is just one piece. The landscape today is really crowded in terms of making your voice heard. So between the product itself and being able to actually sustain it -- and this is where the business part comes in -- can you deliver? Can you ship? Can you stay profitable? All this has to happen concurrently. And then wait for a few years and see if you're still around. Then maybe, hopefully, you've designed something that lasts.

Entrepreneur: Who is trying to make the iconic toy?
Dragusin: Plenty of people are trying. We would like to, but it's really hard. An acquaintance of mine, someone that I respect, David Weeks is the designer and creator of the Cubebot. It's based on a very ingenious idea [the Japanese Kumiki puzzle]. That's iconic. It is a toy but it's also a collector item and it's pretty intense. But it's iconic. 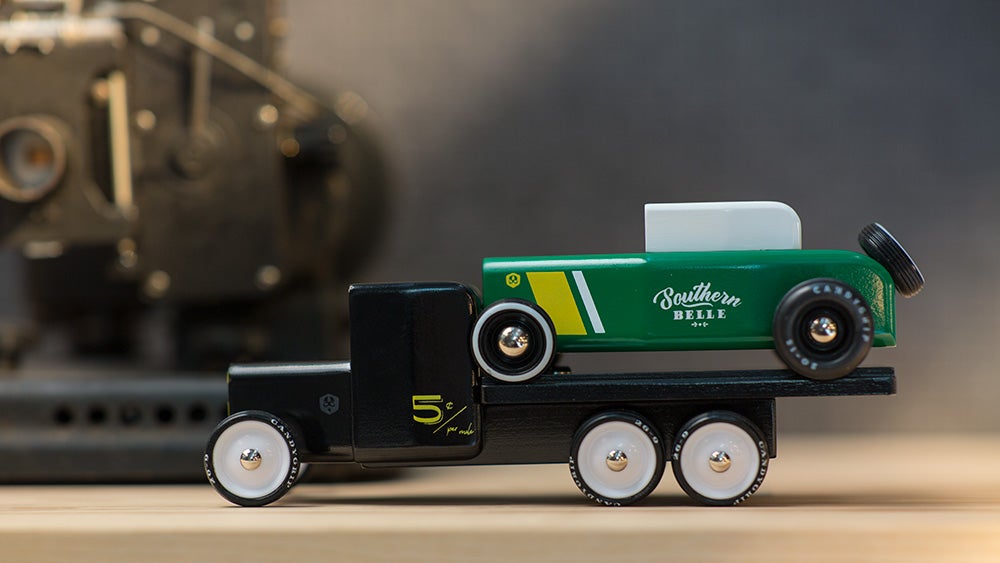 The Southern Belle racer, part of Candylab's new car line, is an homage to female race car drivers of the last century. here it sits atop a second car released this fall, the Bad Emergency Truck, inspired by the workhorse Ford trucks of the '20s and '30s.
Image credit: Candylab

Entrepreneur: Why are the details so important?
Helder: The amount of time we put into considering these things, what the customer sees and the distributor sees. So when we're deciding for an hour between different shades of gray, a lot of people would be like "What's the point of that?" But it really makes a difference, because it affects shelf presence, it affects what people see in a catalog and how will it be represented online. Ultimately, those are the people who are paying for this product. That consideration goes a long way. It can feel nit-picky, but you don't know what's going to grab someone -- maybe it's the lights or shape or the flag. Putting in the time with the design makes people want to come back and get the next toy.

Entrepreneur: You've placed your toys in high-design shops. Why is that important to building your business?
Dragusin: Being in Colette gets you exposure, gets you validation. Being in The Design Museum in London. All these really well-curated places get you where you need to be.

Related: This Disney Princess Will Teach Your Child How to Code

Entrepreneur: So many toys -- and new products in general -- seem to chase some idea that might not resonate in one year, never mind 50. With toys, something might have an adjacent an app that helps you learn code, for instance, might not be supported by a company in time for a younger sibling two years later to use it.
Helder: I've given a lot of thought to sort of this topic, and I think there's a tendency for companies to latch on to whatever the big hit of the moment is and to try and copy it. When the iPhone first came out it seemed like touchscreens were everywhere. They put them on washing machines and stoves. A stove is the worst thing to put a touch screen on because you need to differentiate your surfaces from what's on fire and what's not on fire. That's why touch screens on cars are the worst thing because you need tactile feedback when you drive. There's a reason we're going to buttons and mechanical switches. The thing that lasts this is the thing that has been well thought and well considered.

Entrepreneur: Is vision its own essential part of a strategy?
Dragusin: We want to be the wooden toy company. There's a company that makes plastic bricks -- can you think of which company this is? Or wooden trains? Or affordable home furniture? When people do something well, you become known for that.

We know everyone is feeling those middle-of-the-week jitters, so we thought we would throw something exciting your way! Enjoy ?

Entrepreneur: Vlad, you're a parent as well, though. It was important for you that the toys could also be played with -- really played with. Why is that experience important to building an iconic product?
Dragusin: They fly off that ramp. That is such a simple experience that people can latch onto. But at the same time it's subtle -- the weight of it and the speed and bounciness and all that fun stuff. So, let's say five years from now, you fish it out of your toy chest and you can still do this. It's just play. It's just playing with the toy car. That experience never changes.