This Teen Paid for College by Selling on Etsy. Here Are 5 Ways She Did It.

By Carly Okyle
June 24, 2015
Opinions expressed by Entrepreneur contributors are their own.

LeiLei Secor, 19, lives in upstate New York but goes to college at the University of Virginia, which means she’s paying out-of-state tuition. Even with a scholarship, the cost of her education is high -- around $40,000 a year. Though she hasn’t declared a major yet, she plans to apply to the school’s business program. The plan is to concentrate on economics and foreign affairs if she doesn’t get in but given Secor’s business acumen, rejection seems unlikely.

In three years, this teenager has used her artistry, marketing abilities and time-management skills to rake in $100,000 on Etsy selling handmade jewelry on her shop DesignedByLei. Think: dainty layered necklaces, statement pendants, knuckle rings and her latest obsession: wire jewelry. Not only does it provide a creative escape from schoolwork but also is a way for Secor to pay for college tuition. Because of her achievements, Secor received the National Federation of Independent Businesses’ Young Entrepreneur of the Year Award in 2014 and recently was able to launch her own website. 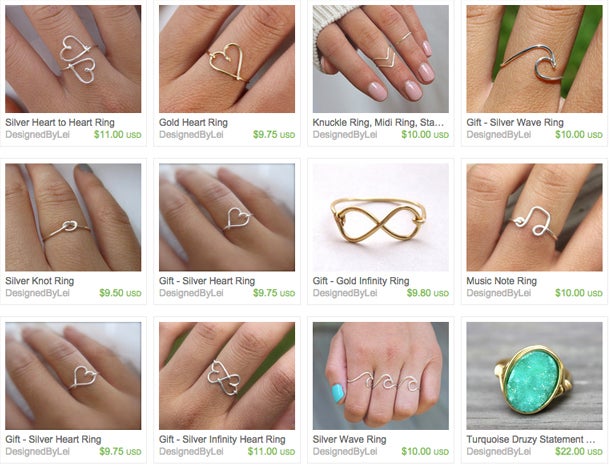 It would be nice to have a little extra cash coming in, wouldn’t it? Luckily, Secor offered up some advice on how to tip the scales of fortune in your favor using online sales platforms like Etsy.

Here are her five best tips:

Don’t be afraid to pivot

Secor joined Etsy in the summer of 2012 and tried to sell beaded macramé bracelets. When buyers failed to take notice, she took a different approach. “It didn’t sell, so I quickly changed to wire-wrap jewelry a week later,” she said. The new designs quickly caught on. Now, her wares are highly rated on Craftcount, a site that tracks Etsy top sellers by category. (Currently, she is ranked 186 out of more than 1,300 Etsy stores)

Branch out from the well-worn path

It’s common knowledge that social-media marketing is a must-have strategy. While Facebook and Twitter might be the first sites to come to mind, they’re hardly your only options. For Secor, the biggest website was Wanelo, a community platform for shoppers. Thousands saw her products on this site, while Facebook didn’t generate much traffic for her because she doesn’t pay for ads. “Another big one was Tumblr,” she says. “One of my rings got reblogged about 50,000 times.” Meanwhile, Pinterest hasn’t been as effective. Go where your customers are and use what works for you, even if it’s not what you expect.

The difference is in the details

Handmade jewelry is a very crowded industry, especially for online sellers. Secor knew she had to stand out in a big way and managed to do so by focusing on small details. “A lot of jewelry looks similar but the way it’s marketed and photographed is what makes or breaks it on Etsy,” she says. She learned that the best way to photograph jewelry is under natural light on a cloudy day because there won’t be a shadow in the picture. Using a simple piece of scrapbooking paper for a plain background, she takes pictures of her products on her porch -- both of the item itself and of her wearing it. Taking the time to learn what makes the jewelry looks best means it’ll be more attractive to potential customers. It’s a small step that makes a big difference.

Use the resources you have and learn from others

Three years ago, Secor didn’t have a high school diploma, much less a business degree. She had the Internet, though, and she used that to her advantage.

“One of the most important things is the ability to be resourceful, she says. “My parents don’t have business backgrounds, so I had to spend hours and hours online researching about it. Etsy has a great forum community, and I read ecommerce blogs [and articles about] how to photograph jewelry and name your company.”

There’s plenty of information out there, but you have to look for it first. When she wasn’t sure what to charge for her jewelry, she looked at what similar items sold for and priced her creations at a similar amount.

Use your time wisely 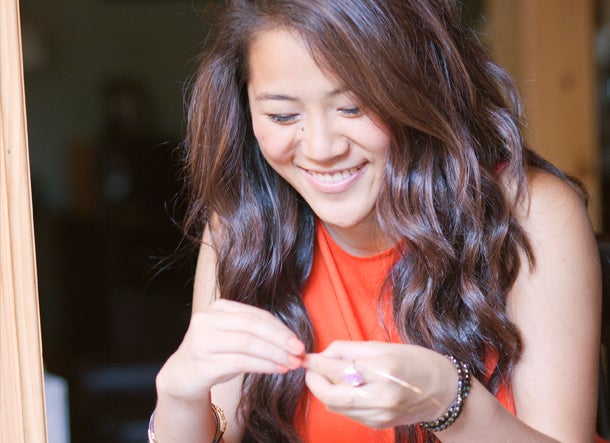 In addition to attending classes and making jewelry, Secor spends time with friends, manages to get some sleep and works a summer job for her local congressman (because running your own business doesn’t count as a job?). She does it all by using her time wisely. “Rather than scroll through Facebook aimlessly, I’ll upload photos to Instagram,” she says. When she needed a study break during finals week, she filled orders. She’s able to keep a balance and find joy in the work. In fact, she has no plans to stop. “I want to continue making jewelry and selling it because I honestly enjoy making it,” she says. “It’s a job, but it’s a nice break from schoolwork.”

Correction: An earlier version of this article misstated that Secor had already applied to the business program. She plans to apply in January 2016.