By Jason Fell
March 5, 2014
Opinions expressed by Entrepreneur contributors are their own.

UPDATE: In this video apology, Back to the Future actor Christopher Lloyd admits that the HUVr videos were indeed a hoax created by comedy site Funny or Die. Anyone who saw the videos and thought the hoverboards were real were "hoverduped," Lloyd says.

Oh, how tech nerds and 1980s movie geeks wish this was for real. Sadly, it's likely just a hoax.

Think back to 1989's Back to the Future Part II. Remember Marty McFly's (played by Michael J Fox) getaway scene, riding a multi-colored hoverboard? How cool was that, right? Sure, the fashion is outdated to us now, but a hoverboard -- that's technology we've been waiting patiently (anxiously?) for all these years.

Then, just this week, comes a pair of videos from a "startup" called HUVr that go completely viral. In the first video, Christopher Lloyd (who played Dr. Emmett Brown in the Back to the Future flicks) introduces HUVr's hoverboard. Present in the video are professional skateboarder Tony Hawk, musician Moby and former football player Terrell Owens. So far, the video has almost 4.4 million views on YouTube.

The second video, which has more than 600,000 views, attempts to explain how this amazing hoverboard works.

The first video says the demonstrations are "completely real" but we're skeptical. They edited out the harnesses and wires, right?

A visit to the HUVr website says it was born in 2010, a project out of the MIT Physics Graduate Program. The site even includes testimony from billionaire tech entrepreneur and investor Mark Cuban:

"Once in a rare while do you get the chance to be part of something this big. This is one of those times. I've never been so excited for a product I've invested in. This f**king thing is going to change the world!"

Yeah, OK, but who are these founding team members? The site doesn't list them by name anywhere. 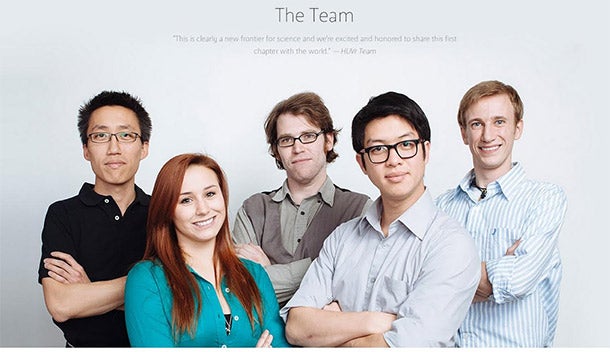 Related: Do You Text While Walking? This App Wants to Save Your Life.

We sent an email to the HUVr team but, so far, no response. We emailed MIT and shot an email to Cuban, even. Not a word from anyone.

So, it's all a hoax then, right? Some sites are speculating that it was dreamed up by the people behind the Funny or Die site.

There is a 30th anniversary Back to the Future musical stage production planned for London next year, but it's doubtful this is intended to drum up marketing for that. An early April Fool's prank? Who knows?

Related: Next Up in Health Tech: DNA Hacking

Alas, while hovercraft technology has existed in some form or another for several decades, it appears that we'll have to keep waiting for true hoverboard awesomeness (like the scene below).