A 5-Step Process for Success as a 'Philanthropreneur'

By Tor Constantino
May 21, 2015
Opinions expressed by Entrepreneur contributors are their own.

Since the industrial revolution, barons of business and captains of capital have donated large portions of their wealth after they've achieved financial success. The names of Rockefeller, Carnegie and Vanderbilt readily come to mind.

The idea of philanthropy got a powerful refresh in 2010 with the launch of The Giving Pledge by billionaire buddies Bill Gates and Warren Buffett. The Pledge is a public promise by the ultra-rich -- think top 1 percent of the richest 1 percent of people on the planet -- to commit massive chunks of their wealth for social good. Buffett famously pledged half his net worth of $47 billion to set the pace for this group of uber givers.

However, the latest version of giving is not merely throwing money at social issues, which is what has largely happened even under the audacious direction of the billionaire club of generous donors assembled by Gates and Buffett.

Charity within the context of the current "sharing economy" combines philanthropy and entrepreneurship, producing the concept of "philanthropreneur."

The philanthropreneur concept centers around the premise that the same skills necessary to make a financial fortune for yourself can also be applied to solve the toughest societal problems we collectively face. Prominent philanthropreneurs include Sir Richard Branson in his quest for inexpensive alternative fuels; eBay founder Pierre Omidyar and his $100 million support of micro-financing programs; or the Clinton Global Initiative founded by namesakes Bill and Hillary to address a variety of issues including an end to preventable blindness by the year 2020.

Philanthropreneurs go "all in" on their social responsibility endeavors with the same vigor as they would a tech start-up or a new invention for the Internet of Things. Dan Haseltine is one such individual. He's the lead singer for the band Jars of Clay, which has won multiple Grammys, had several multi-platinum albums and continues to release new music after 12 full albums and two decades as a band. 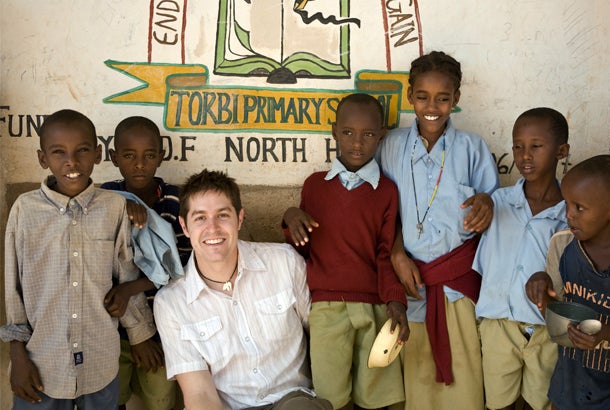 Haseltine has made the transition from musical entrepreneur to philanthropreneur.

"It really began after I started learning about HIV and AIDS while touring with our band, and we were trying to find other ways to use the platform we had as artists. The conversation about HIV and AIDS was just beginning and a lot of people were asking what it looked like in Africa. So I went to Africa. While I was there I learned and saw a lot because I was so uninformed. All I could bring to the table at that time was a lot of questions," he said.

Shortly after that first trip, Haseltine started an organization called Blood:Water to address what he says Africa needed most, "clean blood and clean water." To achieve that goal, he fully embraced the mindset of a philanthropreneur, recognizing that his organization had to do more than give dollars.

"We offer expertise, mentorship, logistical support, consultative guidance as well as a relational component and consistent presence to people on the ground, those functions are typically aligned with business ventures rather non-profits. It's much more than just philanthropy because our commitment has multiple layers to it beyond the financial piece."

He asserts that his first steps from an entrepreneur to become a philanthropreneur began with his firsthand observations.

Haseltine says there's no substitute for being there to understand and assess. During his Africa trip, not only was the AIDS epidemic obvious to him, but he witnessed that none of the areas had access to clean water supply. He made a counterintuitive connection.

"So many adults were weakened by HIV, children would walk miles to muddy water pits and then drag the water back to their communities heavily hit by AIDS," said Haseltine. "These were individuals with compromised immune systems. When they would drink the contaminated water, it was the water that was actually killing them."

Related: Why Philanthropy Is Good Business

Haseltine says he was shocked by that revelation, but he also saw an opportunity to bring that insight back to the US and distil the complex AIDS issue down to a much simpler message.

"A lot of people were afraid of AIDS when it first began. It wrestled with certain types of ethics, morality, cultural norms and sexuality. All of these issues would be wrapped up in most discussions about AIDS causing confusion and inaction. But access to clean water was a much easier conversation to have that was readily understood by everyone," he said.

Haseltine knew that putting access to clean water within a community would drastically improve the health of individuals struggling with HIV as well as the community as a whole.

He says grassroots support for the Blood:Water initiative organically emerged when the band performed on college campuses and coffee houses around the country. It was an idea that struck a chord with fans of their music.

"Before our concerts we'd let fans and students know Jars of Clay wanted to have a frank discussion about AIDS and clean water," said Haseltine. "Many of those sessions were packed. We knew topics like this gain energy and generate heat when they're discussed in the open. Those conversations expanded to members on Capitol Hill and highly-networked individuals within the arts community."

As the discussion expanded, Haseltine recognized that they needed to engage experts in logistics and delivery of humanitarian aid.

"We were just musicians and poets. We could eloquently talk about the challenges of HIV and need for clean water, but there were limits to what we could accomplish on our own," he said.

That recognition was critical to moving the vision from a conversation to implementation that ultimately impacted lives.

While some don't see the connection between award-winning music such as "Flood" or "Work" and social entrepreneurship in the form of the Blood:Water project, Haseltine sees a clear theme that links his body of music with his drive to help.

"For me, it has always been about connection. The connection between music, art and social justice while trying to be responsible and aware of the challenges going on in our world. These elements drive my personal need to connect, which has been an underlying theme of my life. Blood:Water was the logical progression in the pursuit of that connection. It was an on-ramp for my desire to make a difference," he said.

One of the significant differences that Blood:Water has made thus far is the completion of aqua piping and filtration infrastructure that has resulted in more than one thousand deep water wells in as many African communities that now have fresh water---offering a fighting chance against AIDS in those areas.

"Success for me begins and ends with a 'human story' of hope and helping. I see my direct competitors now as cynicism, distraction and inconsequential trivia. The lives of individuals are at stake and their stories matter," said Haseltine. "One of the most important lessons I've learned is that when I now approach people to get involved with these stories, it's not a burden on them because it helps them break from their own trivia. I'm asking them to help create a better story, a story that will endure. There's no better business than that," he said.

Related: Are You a Socialpreneur?