We hit the road in one of the most powerful SUVs on Earth. 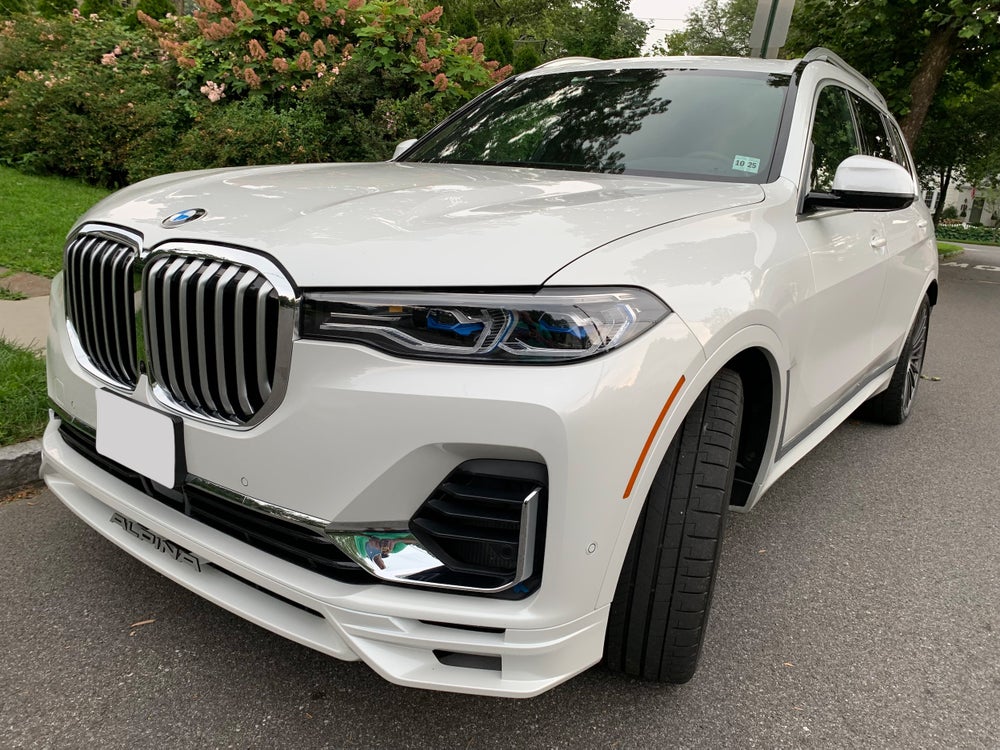 If you want to give a vehicle a proper driving test, you take it to a closed course and hook up all kinds of monitors and computers to get precision measurements as you put it through its paces braking, accelerating and cornering.

But if you really want to give a vehicle a stress test, one that pushes it to its limits under the most extreme conditions, you skip the track and technology, and load it up instead with family members, suitcases and boogie boards and drive 125 miles to your first vacation since lockdown. That's the test I gave the 2021 BMW Alpina XB7.

Our journey began amongst the manicured lawns of Westchester, New York and ended in the spray of the crashing waves of Montauk at the very end of Long Island. While this three-row SUV looks all demure and refined from the outside, under the hood it holds a beastly secret: a twin-turbo V-8 engine that puts out 612 horsepower. For those not familiar, that's a lot of horsepower. A similarly sized Honda Pilot has 280 hp, and the 2022 Corvette has 490. So what does that mean? As I discovered on a rare stretch of the Long Island Expressway that wasn't bumper-to-bumper traffic, the Alpina can move.

Car and Driver magazine says that the Alpina goes from 0-60 in 3.7 seconds. Given my precious cargo (i.e. my wife, two teenage sons and a fancy beach chair with a built-in umbrella), I didn't attempt to find out for myself. But without publicly admitting anything that would land me in traffic court and/or jail, I will say that I did take a Tesla or two off the line while stopped at red lights passing through the Hamptons. (Sure, the other drivers didn't actually know they were racing me, but still, I smoked them.) 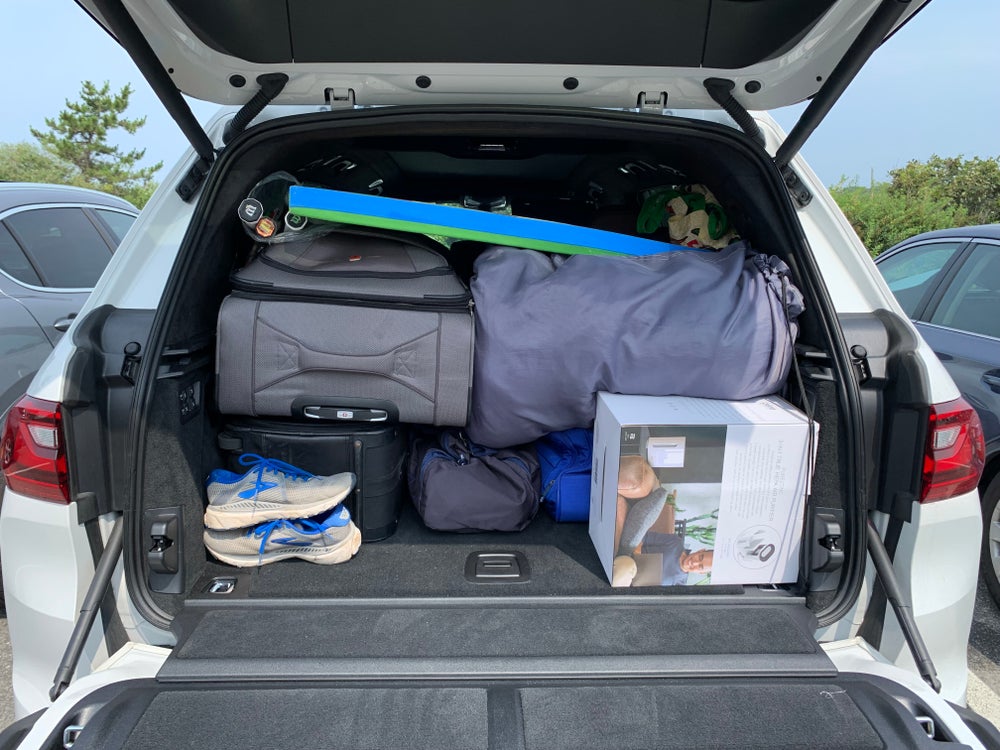 All of those hours of playing Tetris finally pay off.

The Alpina allows you to select from two different driving modes, which affect performance and suspension: Sport and Comfort. Sport mode makes the vehicle quicker and more beast-like. Comfort mode, as you might guess, is more comfortable. Now, as anyone who has ever been on a car trip with their family that lasts more than 10 minutes knows, whining from the back seat can put an immediate dent in your happy vacation vibes. So while the "dude" in me wanted to live in the rumble of Sport mode for our three-hour ride, we mostly cruised in Comfort.

On that front, the Alpina wildly over-delivers. The front and passenger seats feel like you are sitting on a buttery cloud made of leather and good life decisions. In the back, we folded down the third row to max out our trunk space. The second row can either feature a rear bench with three seats or two individual captain's chairs. Our vehicle was outfitted with a bench, and our teenage sons were able to manspread to their hearts' content. And individual entertainment screens on the backs of the front seats kept battling over what SiriusXM station would provide the soundtrack of our journey to a minimum. 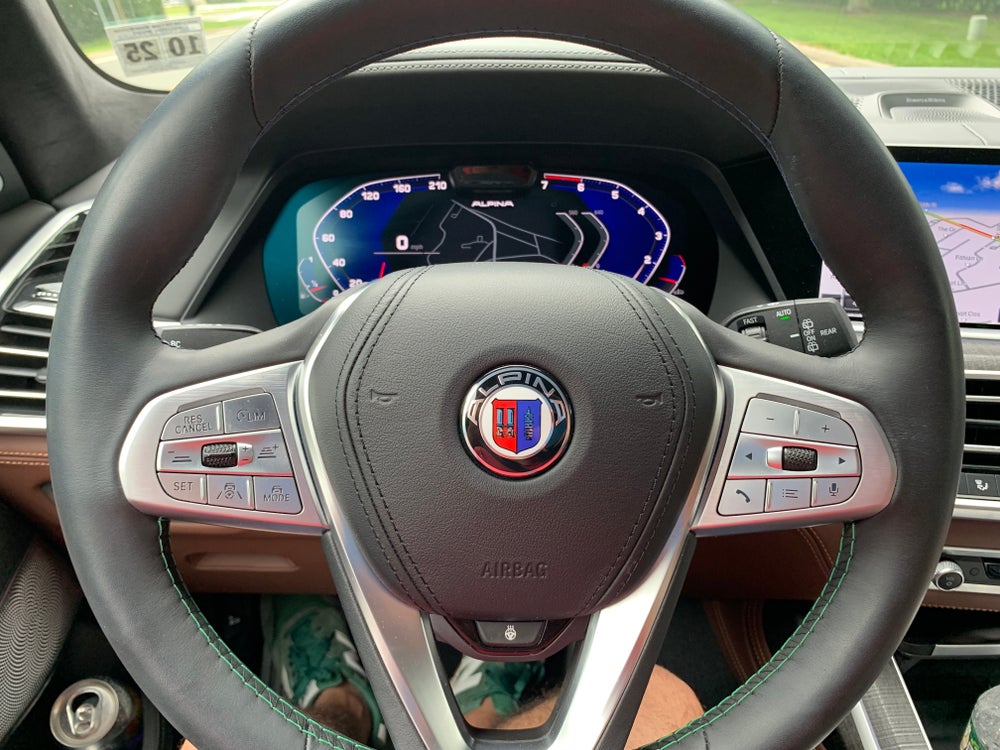 Honk if you're fancy.

Everything about the Alpina's interior is scarily nice. I hesitated for at least 15 seconds before bringing a cup of coffee inside. The gear selector has a clear glass, blue-illuminated knob, the sound system completely rocked, and the massive panoramic sunroof makes you feel like you're driving in a convertible that won't ever mess up your "do. I really dug all of that stuff, but was really, really smitten by the navigation system. My sense of direction is, to put it mildly, hot garbage. The Alpina's large touchscreen with pinch and zoom capabilities saved my butt on multiple occasions as I tried traffic-dodging shortcuts and got hopelessly lost on backroads. Oh, and speaking of hot garbage, I should mention the front seats have built-in air conditioning vents. After three hours of battling traffic in 90-degree heat, you'd expect to emerge from your vehicle with a soaking wet back and a not-so-fresh feeling. But if you are driving the Alpina, you'd be wrong. 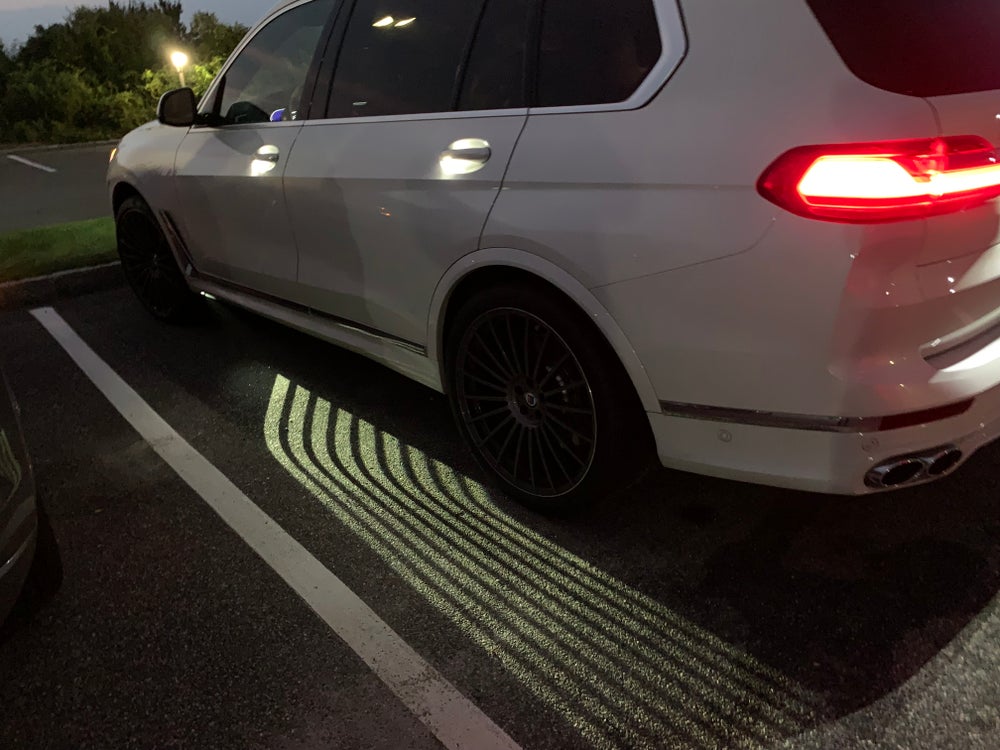 The exterior of the Alpina is lux, yet understated. Loved the rims and the cool light pattern thrown by the running boards when you approach it at night. And honestly, I loved the fact that while this is a super-luxury vehicle that starts around $140,000, it doesn't scream that fact to the world. You, the driver, get to experience all of the bells and whistles and performance that its price tag offers without feeling like you're showing off. Or going through a terrible midlife crisis.

The only thing about this test drive that I didn't like was the part where I had to return it and drive back home in my 2008 Saab, whose broken air conditioner offers two modes: hot and you're going to die. I'll never forget you, vented seats!