By Carol Tice
November 30, 2009
Opinions expressed by Entrepreneur contributors are their own. 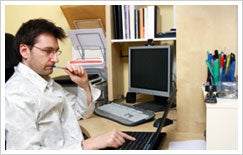 Home-based entrepreneurs have always suffered under a kind of second-class citizenship in the small business world. It was sort of code for "hobby business." But in recent years, as technology made virtual teams easier, I've increasingly come to wonder if that status was warranted.
I've often found myself interviewing the CEO of some hot new multi-million dollar company, only to have it explained to me almost offhandedly that the chief exec lived in Maryland, while other team members lived in San Francisco, Israel, Boston and New York. And they all worked out of their homes.
Apparently it's not my imagination. A new study conducted by Emergent Research and commissioned by Network Solutions and the University of Maryland's Robert H. Smith School of Business documents the surprisingly strong financial impact home-based businesses have on our economy.
In Homepreneurs: A Vital Economic Force, researchers combed the Network Solutions Small Business Success Index survey to learn more about the realities of home-based businesses today. Among the findings:
Ã¢Â€Â¢ About 6.6 million home-based businesses fit the description of a "homepreneur," and provide at least half of their household's total income. Most aren't dabbling--75 percent are working at their business full-time.
Ã¢Â€Â¢ Just as I'd noticed in my own reporting, home-based businesses frequently employ other workers. The study showed homepreneurs employ more American workers than venture-capital backed firms.
Ã¢Â€Â¢ They're not passing fancies, either. Half the homepreneurs in the survey had run their business 15 years or more. Only one-fifth had been in business under five years.
Ã¢Â€Â¢ Half the homepreneurs had employees, with 39 percent saying they had between two and five workers on the payroll. The researchers estimated 13.2 million are employed by homepreneurs.
Ã¢Â€Â¢ They made good money--35 percent of homepreneurs were generating more than $125,000 a year in revenue.