Mark Greene started his path to the Air Force during a time of peace, but when the 22-year-old graduated, he was sent almost immediately to Afghanistan.

"I was the class that graduated right after the towers came down," Greene said. "It was a really strange time to start a career as a military pilot."

The new fighter pilot had just completed a training program in Mississippi, and he began his first day as a second lieutenant -- outranking 85 percent of the military. Greene said he remembers 19-year-old Marines being shot by snipers or running from roadside bombs, and from the air, it was Greene's job to listen to what was happening on the ground and then respond accordingly. 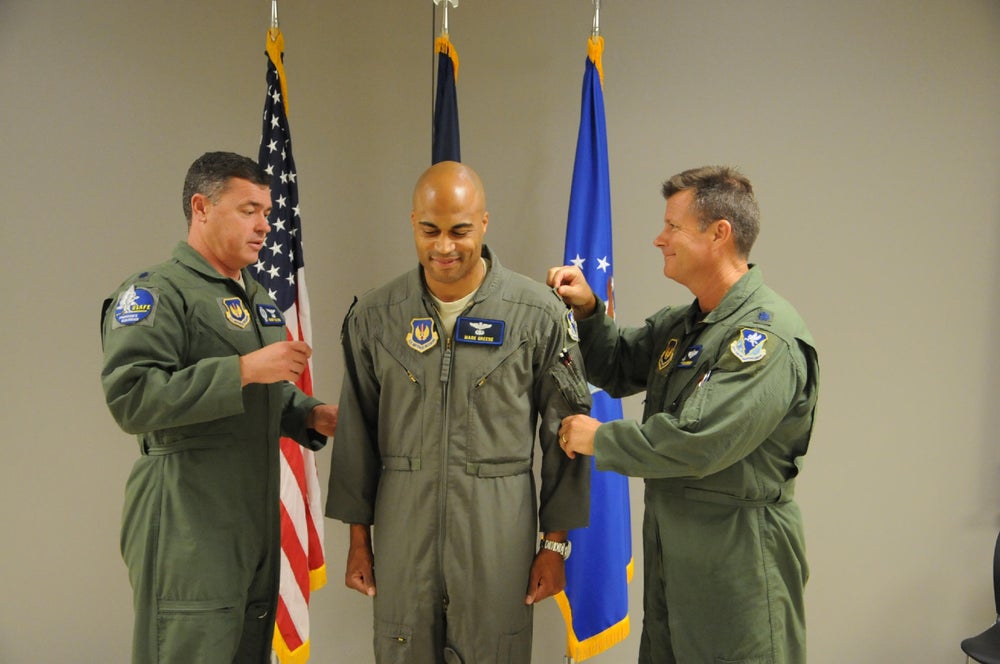 "[There was] really no air battle in these fights -- it was more protecting people on the ground," he said.

Whenever he returned home, Greene would hear news reports mention dead Americans in Mosul and other cities. He could imagine those places. It was difficult to come home, but Greene said it was also tough to go back. By 2008, he was spending as many as 220 days a year overseas.

In the following years, Greene went on to fly about 170 combat missions. However he felt about the war itself, he enjoyed the "mission aspect" of his job: responding to the needs of struggling U.S. soldiers.

Later, he'd apply that same mission-oriented thinking to something else entirely: creating new financial tools for struggling consumers across America. 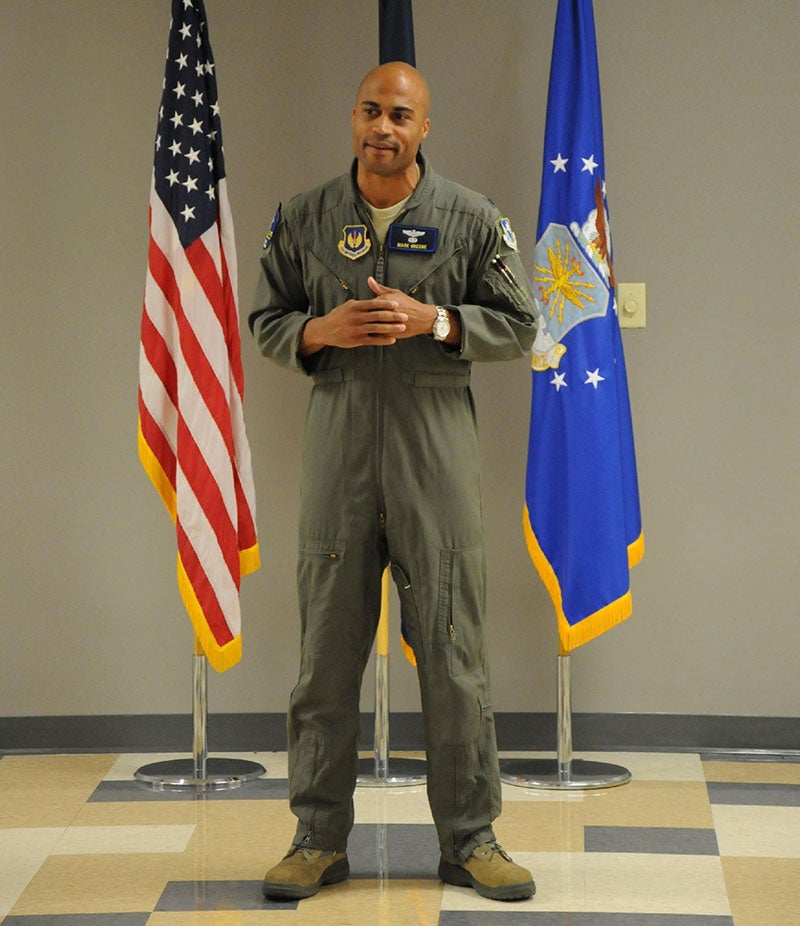 Greene is the director of SafetyNet, an innovation lab that's part of CUNA Mutual Group, a nationwide insurance company. The innovation lab's ultimate goal is what sets it apart: Listen to the needs of millions of Americans struggling through financial hardship -- people that banks and credit unions may not view as first-priority customers -- and create entirely new financial tools for them. Here's his story.

Greene's family is staggering in number. His father is the youngest of 14 siblings, while his mother is the youngest of five -- yielding hundreds (yes, hundreds) of cousins. Relatives of all ages riddle Greene's childhood memories. His family members' future trajectories would vary as much as their personalities -- some found great success, others struggled with personal finance and still others, as he put it, ended up on the "wrong side of law."

Greene's parents didn't often discuss money, but he remembers seeing them struggle -- there were hints, he said, that the family wasn't necessarily on secure financial footing. One memory in particular sticks with Greene, and it would go on to shape how he thinks about service and gratitude. When, at age 10 or 11, he had his heart set on the newest pair of Nike shoes, his father presented him with a pair by a brand Greene had never heard of. He recalls that his reaction -- upset and ungrateful -- hurt his father deeply.

"That's something that affected me my whole life," Greene said. He recalled thinking, I have to change this. From that point forward, he had a renewed resolve to help people struggling in any difficult situation.

After the financial crisis hit in 2008, the government decided to consolidate military bases, and Greene's squadron was discontinued. He had a choice: Either relocate to Germany or do something else. Greene decided to apply to law school with the goal of eventually prosecuting war crimes -- after all, he'd learned about law by studying the laws of war as a pilot. At the same time, one weekend a month, he flew training missions for the Air National Guard.

Greene's first class in law school, Contracts 1, changed his career trajectory. One day in class, he read about a costly dispute that could have been avoided if the defendants had organized their business differently from the get-go. Since Greene had been trained as an engineer, he was naturally interested in how things are built and put together. Because of that, he said, learning about the structure of businesses "blew [his] mind." 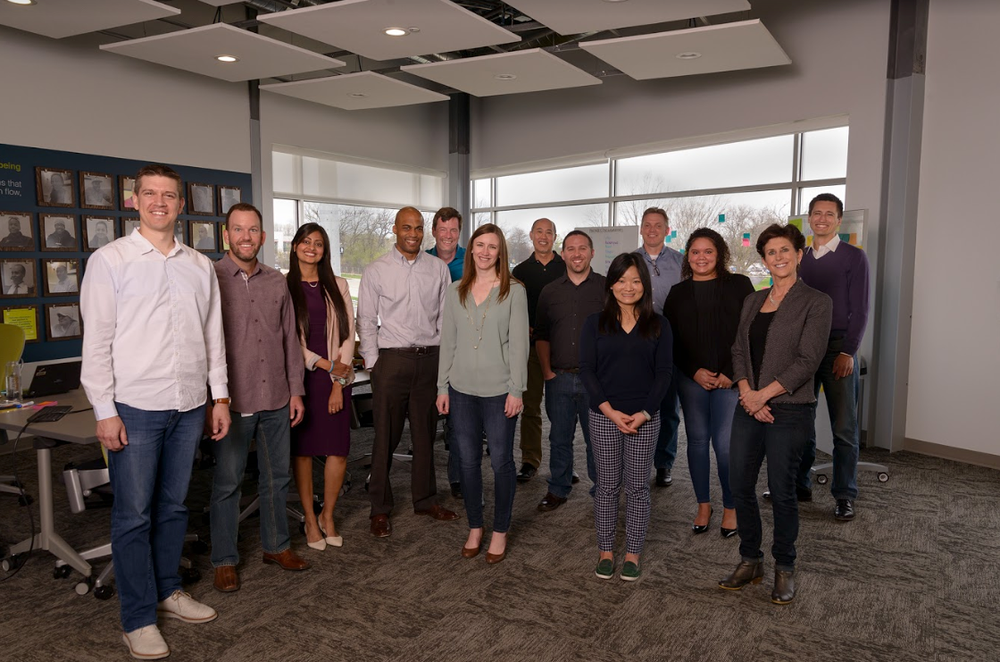 "Studying how a contract is written kind of changes the way you think about how everything is structured," he said. "That was the first moment where I saw the power of business."

The class didn't only teach Greene about long-term business structure -- it also taught him that companies could effectively boost their efficiency by listening to direct feedback from consumers. Through his time in the military, Greene had learned that on the government side, that feedback loop -- connecting directly to the people -- was exceedingly convoluted.

The idea of listening to customers to inform a business's foundation would come into play sooner than Greene realized. Post-graduation, he snagged a job at Merrill Lynch in Madison, Wis., but his affluent client base -- and a report on the state's racial disparity -- sparked new resolve in Greene. He felt he could be doing much more to help a larger cross-section of consumers on the ground.

One day in 2016, Greene met with Dan Kaiser, an executive at CUNA Mutual Group. Kaiser wanted to talk through ideas about different financial solutions Greene wished existed. Kaiser was helping to develop an innovation lab, he said, to focus on solutions for consumers' personal finance issues, and it was being kept largely under wraps. The project was spurred by a Federal Reserve report citing figures that close to half of Americans would be unable to come up with $400 in an emergency -- and that a greater number of individuals than that didn't have $1,000 in savings.

After ordering coffee, the men talked about how insurance could be flipped on its head to help struggling people with immediate cash flow needs or insure their savings accounts. But Greene didn't realize he was interviewing for a job until he received a game-changing phone call that same week. "We're building a team," he recalled hearing from an executive on the other end. Greene accepted the offer and joined the innovation lab as soon as it launched.

On Greene's first day as director of SafetyNet, he said he met the team and read the mission statement on the wall: "Improve the financial well-being of millions of hard-working people by developing innovative financial solutions that help individuals manage unexpected cash flow, bill payment and savings challenges."

Members of the team were tasked with thinking of creative ways to solve enduring financial problems, and Greene soon discovered he would embark on a nine-month venture to talk with 7,000 consumers in states including Texas, North Carolina, Wisconsin and Illinois about the tools they wished they had to take control of their money. Greene said he didn't believe the statistics that Trunzo had cited in their coffee meeting until his eight-person team began speaking with consumers across the country.

On April 11, 2016, Greene sat in a Hilton hotel in Madison, Wis. He was waiting to speak with a woman named Chelsea about her money struggles as part of SafetyNet's new venture. Chelsea had called earlier in the day to cancel the interview, but she eventually changed her mind and finally walked into the Hilton around 5:30 p.m.

Greene listened as Chelsea explained how hopeless she felt -- that she avoided almost all contact with her financial institutions, including opening mail, and that managing her money paycheck to paycheck had become almost a traumatic experience. She said the money that she owed family members had driven a rift between them, and though she wished she could take control of her financial life, she didn't know where to begin. 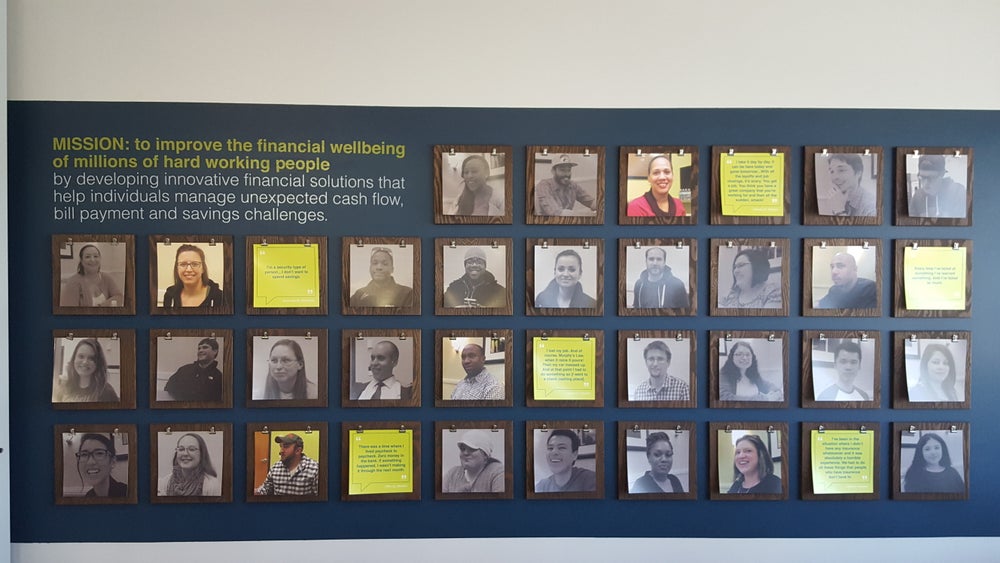 Chelsea shivered as she talked, and as she unloaded more and more of her story, she became more emotional. Her pain was so great that Greene felt like he was speaking with a victim of domestic violence. All he could think to do was offer her a glass of water -- and listen.

"I left that conversation with the feeling that that relationship that she had with her finances and financial institution was abusive," he said. When he imagined Chelsea representing millions of people in the U.S., Greene said he knew he had to work to change the way people interact with the financial institutions that should be serving them.

The photos of the consumers Greene and his team spoke with ended up in neat rows on the wall of SafetyNet's primary meeting room. Every time the team meets to discuss an issue, they're under the watchful eye of the people who were honest enough to share their money woes with a company they believed may be able to help them.

After 7,000 conversations with consumers, Greene started brainstorming solutions he and his team could build -- including "layoff insurance" for people without emergency savings.

This year, Greene's team is building 25 different products to meet the needs of financially strapped Americans, including an employer-match savings account product, a type of insurance aiming to protect people from eviction, a new type of peer-to-peer lending platform and even pet insurance. The conversation Greene had with Chelsea in April 2016 inspired SafetyNet to develop a new type of budgeting app, and Chelsea is currently beta testing it.

By the end of 2017, SafetyNet was growing at a rate of more than 8 percent week over week -- primarily via word of mouth, Greene said, and without using insurance agents. The company now operates in 10 states.

"What we want to be," Greene said, "is a company that understands our consumers better than anyone."