What To Do If Your Company's Blog Is Subpoenaed

By Mikal E. Belicove
October 12, 2010
Opinions expressed by Entrepreneur contributors are their own. 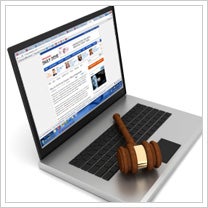 Earlier this year, the Cleveland Plain Dealer disclosed that a local judge -- or somebody using her e-mail account -- had been using the newspaper's comment section to opine on several of the judge's cases. The judge filed a $50-million invasion of privacy suit, claiming the newspaper violated the site's terms of service. The suit also sought personally identifiable information for anonymous comments on the website that were critical of the judge.

The ability to post anonymous comments has become a hallmark of the internet. Our tradition of anonymous political commentary dates back to the American Revolution, and courts -- including the Supreme Court -- have always held that the right to speak anonymously enjoys First Amendment protection. On the other hand, the First Amendment doesn't extend the same protection to commercial speech. And it certainly doesn't protect publication of false facts.

Most businesses that maintain blogs don't have a clue as to what to do if they're subpoenaed for user information. Enter Damon E. Dunn, a partner with Funkhouser Vegosen Liebman & Dunn Ltd., a firm specializing in media law in Chicago, who talked to me recently about corporate ignorance and subpoenas over blog content. "Anonymous posts that defame, mislead consumers, leak trade secrets or otherwise invade the rights of others -- including intellectual property, publicity and privacy rights -- are all vulnerable to exposure through subpoenas," says Dunn.

He suggests businesses review their blog's terms of service, adding that most terms allow disclosure of personal identification information (PII) in response to an order from the court. Site administrators also have the discretion to alert authorities to threats of physical harm left on a blog in the form of an anonymous comment.

"Ambiguous or inconspicuous terms of service may not shield an Internet Service Provider against a privacy suit from authors who reasonably believed they were promised anonymity," Dunn warns. "As a result, more sites are requiring users to enter PII before they can post. They can still post the comments anonymously, but the administrator is able to identify the author. Registration has the potential to increase pressure on the ISP to disclose -- even though the anonymous authors may think the ISP has undertaken to protect their identities."

Another option is to require authors to post under their true names. This will undoubtedly discourage traffic to many sites, but much of the public has been conditioned by social networking sites like Facebook, Twitter and LinkedIn, where their true names, pictures and personal biographies are often included.

In the event that you are subpoenaed, Dunn suggests you seek legal advice right away. "[All] subpoenas include a deadline to respond," he says. And failure to act can forfeit rights to object, or worse yet, result in contempt sanctions.

"On the other hand, premature compliance may cause the exposed author to sue for breach of contract and invasion of privacy," says Dunn, "Therefore, most courts believe that the ISP can object to a subpoena for PII on First Amendment or other grounds. Objections to federal subpoenas must be timely, and in writing."

He said many states require an attorney to file a motion to quash. In addition, an attorney may be able to negotiate a resolution, or obtain additional time for the author to intervene to protect his anonymity.

Dunn said some courts require litigants to satisfy an evidentiary threshold before compelling disclosure of PII. Decisions vary, but a consensus appears to be emerging in state and federal courts regarding preconditions to enforcing a subpoena for PII.

So what do you do if you are the target of anonymouscommentary? Negative comments that appear on third-party forums, rating sitesand elsewhere is not necessarily actionable, Dunn says.

"The tolerance for legitimate consumer complaints andopinions, however, may not extend to competitors, disgruntled former employeesand those who assume the identities of others to lend credence to maliciousfalsehoods," says Dunn. "In some cases, anonymous online harassment can be afederal crime. Whether to ignore, rebut or sue over defamation and false lightpresents a case by case decision, although violations of intellectual propertyrights will often require some form of legal response."

Any potential plaintiff must be prepared to face thelegal, economic and technical hurdles to collecting on a civil verdict against-- or even learning the identity -- of an anonymous foe.