By Syed Balkhi
July 10, 2019
Opinions expressed by Entrepreneur contributors are their own.

Have you lately scrolled through your Facebook feed and found yourself stopping to watch a video ad? You probably have because, let's face it, some of those ads are pretty eye-catching. In fact, Facebook Video ads are more engaging than other types of social media content or ads.

Related: 17 Ways to Get More Views, Engagement and Shares on Your Facebook Videos

According to Facebook, people gaze five times longer at a video than static content on Facebook and Instagram. So, clearly, creating video ads is an effective way to promote your business to the billions of users on Facebook. That's why it's wise to consider testing video ads in your Facebook campaigns.

To get started, your first step is to film a video, of course. So, make sure to film a quality video: Use quality equipment (even a smartphone works); film in a well-lit area (whether natural lighting or artificial); use a white background to showcase products and bounce light; and purchase an inexpensive tripod for stability. Those are the basics, but what else can you do to make sure your Facebook Video ad gets views, keeps the attention of your audience and encourages them to buy?

If you want to create a Facebook Video ad that resonates with your target audience, you need to tell a story. When you tell a story that your ideal customers can relate to, they'll be more likely to pay attention and even convert.

A simple way to tell a story, as well as capture attention, with your Facebook Video ad is by asking a question. Take a look at the example below from Promo. It asks viewers: "Running a small business?" The question, along with the thumbnail image of a child with a boombox, immediately tells a story of how hard it is to be heard and get noticed as a small business.

Think about the pain points of your target audience and create a story for your video ad around those points. Remember, an engaging story starts with a conflict and then shows a solution (your product or service). A good story will capture the attention of your audience, draw them in and they'll remember it afterwards.

As an example, this Facebook Video ad from AdRoll is only two seconds long, but it grabs the attention of users right away with its use of bright colors and a fun animation; the cute dog doesn't hurt, either. 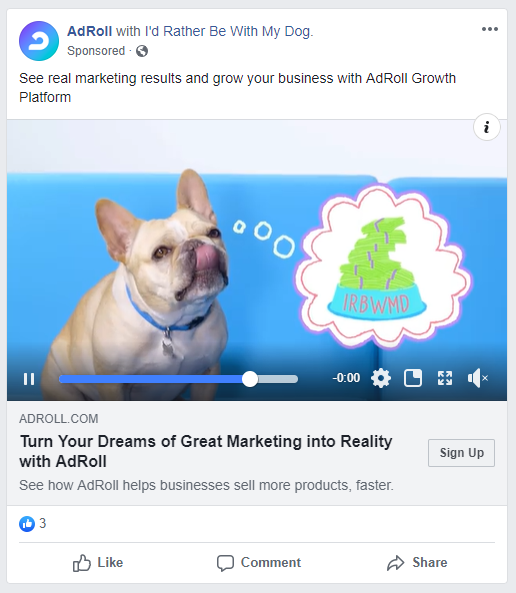 Silent films may seem like a thing of the past, but they're not -- not when it comes to Facebook Video ads. According to statistics from DigiDay, 85 percent of Facebook video offerings are watched without sound. This stems from the fact that many people are on Facebook from their mobile phones. When they're out in public, they don't want to disturb those around them. Because of this, it's important that your Facebook Video ads be optimized for silence.

For instance, take a look at the video ad below from OwlLabs. Take away the text. Would you have any idea what the video was about just by looking at it? No, you wouldn't, so you probably wouldn't stick around long to figure it out. But, with the text, you know exactly what the video is about, making you more likely to keep watching if the topic interests you. 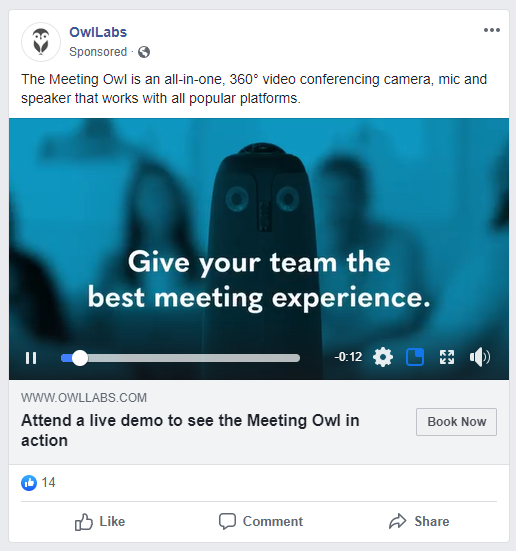 So, consider adding text overlays to your video ads, turning on captions in your video settings and making sure you have stunning imagery.

Now, if you don't have any quality marketing or product videos, or you're not comfortable with your filming skills yet, don't worry. You can still create engaging Facebook Video ads using static images of your products.

Facebook recently added new features to its Video Creation Kit that allow you to take your static images and convert them into a video ad. This Facebook tool even offers a template that allows you to upload a single static image and add motion to it. 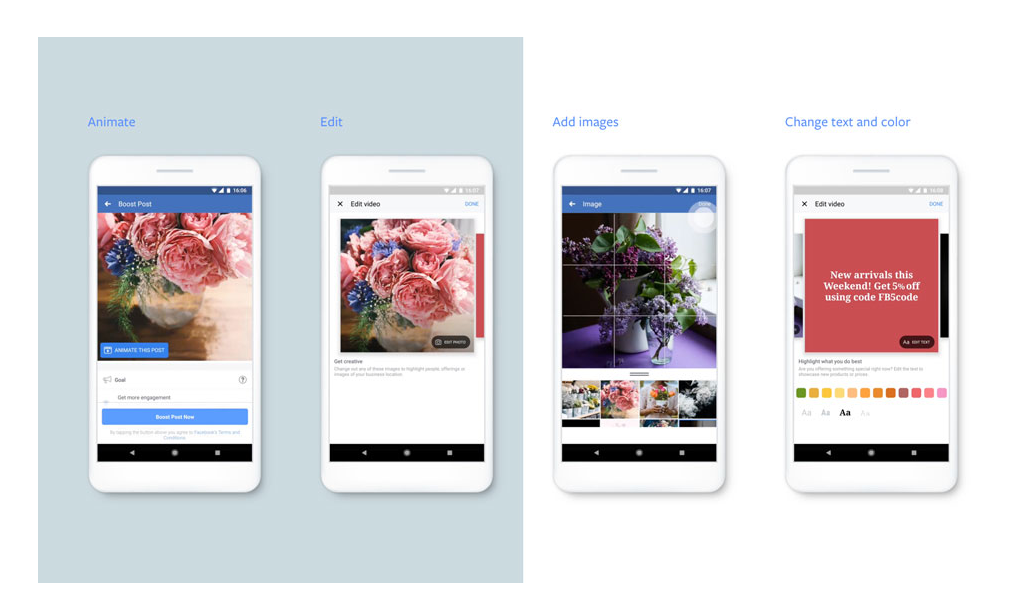 These new features make it even easier for small businesses to create killer Facebook Video ads that will stop users in their tracks.

Creating a Facebook Video ad isn't just about showing off your product; it needs to do more than that. Because there's so much content on social media, your ad needs to stand out from the crowd and help your audience connect with your business. With these tips, you'll be well on your way to creating awesome Facebook Video ads.