How to Manage Your Yelp Reviews

Ignore the power of online customer evaluations at your own peril. Get advice from Yelp's CEO and a business owner who's using the online customer reviews to grow her business.

When co-founders Jeremy Stoppelman and Russel Simmons conjured up the idea for Yelp during a startups incubator four years ago, they didn't think people would care to review businesses. Now Yelp is one of the most popular online customer review sites. It's succeeded in translating word-of-mouth to the World Wide Web and has transformed the way people interact with businesses.

The site can be a great way for entrepreneurs to promote their business. Since anyone can enter a business on Yelp, it's a good idea for business owners to check out the site and see what's there.

Yelp was launched in 2004 in San Francisco and now covers the entire United States. It includes every type of business imaginable. Users rate a business' services on a one- to five-star rating system. Eighty-five percent of all its reviews are three stars or higher with 67 percent rating at four or five stars, so for the majority of businesses the feedback is good. For businesses with reviews that seem a little lackluster, there are tricks to boosting your star rating.

Getting Started on Yelp

Stoppelman, Yelp's CEO, gives the following tips for business owners to set up and manage their Yelp business page:

"Consumers do need to come first. If they're not comfortable sharing, then the site stops working . . . if someone can make a snarky comment back at you, that might have a shouting down effect. It doesn't reflect well on a business either," Stoppelman says.

In any public review forum, there's a chance that an audience could be misled by false reviews. Yelp mitigates that by giving reviewers identity. Those with the best reviews are rated by other users and boosted into the Yelp Elite Squad.

Manage Your Reviews, Both Positive and Negative

"We're anchored by real people. Anyone can click through and see who they are and see how many reviews they've written," says Stephanie Ichinose, Yelp's communications director. "That transparency helps the community understand who's talking about the business and how much we should value that particular opinion. And there are a lot of faceless reviews; it goes in both ways."

Rather than be alarmed by negative reviews, Ichinose recommends a business owner read reviews in the same way a consumer would read them.

"Look at them in aggregate. Take a step back and see if there are any trends," Ichinose says.

If there are trends that point out something negative--Ichinose gives the common complaint of loud music playing in a business as an example--that's when to take action to remedy the situation in your business.

For Annie Decamp, owner of Palo Alto, California-based jewelry business Decamp, tracking her page led her to discover a whopping 8 percent of her sales come from Yelp. That realization caused her to advertise on Yelp in order to get the extras--a link to the Decamp website on her business's Yelp page and a rotating slideshow of photographs instead of a static one. 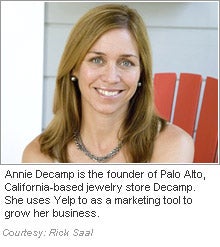 But for her, it took some experimenting until she found a Yelp subscription she was comfortable with. She signed up for a pricier package but decided to cut back to a lower-cost one in February.

"I would recommend starting with the lowest one. Pay attention and track it for awhile and know how many people are using it," Decamp says.

She recommends starting a customer mailing list, and promoting your Yelp page there as well as in newsletters. "It'll say, 'We're now reviewed on Yelp,' or 'Please review me on Yelp.'"

She and her employees also ask callers where they heard about Decamp. "A lot of times they'll say Yelp," Decamp says. "I think of everything in a marketing sense, so I need to understand where customers are coming from and I need to know what I'm paying for."

Decamp follows through by contacting everyone who's reviewed her business with a thank-you e-mail.

"It's a very personal site. The people that I don't know--I think that's a really big thing for them to take the time to do that."