Those 10 hours of testimony resulted in some overarching questions, a few revelations about Facebook's policies and more than a few strange moments from Zuckerberg and lawmakers alike. Here's the breakdown.

On Wednesday, New Mexico Rep. Ben Ray Luján brought up reports of "shadow profiles" -- or the idea that Facebook stores data on people who aren't users -- and mentioned an aspect of the platform that only discloses the data Facebook collects on users once someone becomes a user. Zuckerberg said he wasn't specifically familiar with "shadow profiles," but he told House members that Facebook collects data on people who aren't signed up for security reasons -- for example, to protect users against malicious actors attempting to repeatedly access the platform to collect public information.

Experts worry that lawmakers' lack of familiarity with the internet could lead to problems crafting the right legislation down the line. Some key flubs from senators during Tuesday's hearing? Hawaii Sen. Brian Schatz seemed to think Facebook's text-messaging tool WhatsApp was an email service, and West Virginia Sen. Shelley Moore Capito asked if Facebook could bring fiber -- a form of high-speed Internet -- to her state, even though the company doesn't offer it. Utah Sen. Orrin Hatch also asked Zuckerberg how he sustains a business model without users paying for service. After a brief silence, the CEO responded with a slight smirk, "Senator, we run ads."

The European Union's general data protection regulation (GDPR) was a crowd favorite on both Tuesday and Wednesday, with senators and representatives alike mentioning that regulating Facebook might be a necessity moving forward.

"I was happy to hear Mr. Zuckerberg concede that his industry needed to be regulated," said New Jersey Rep. Frank Pallone on Wednesday. "We need comprehensive privacy and data legislation."

Photographs of Zuckerberg's notes for the hearing show one section that reads, "Don't say we already do what GDPR requires." 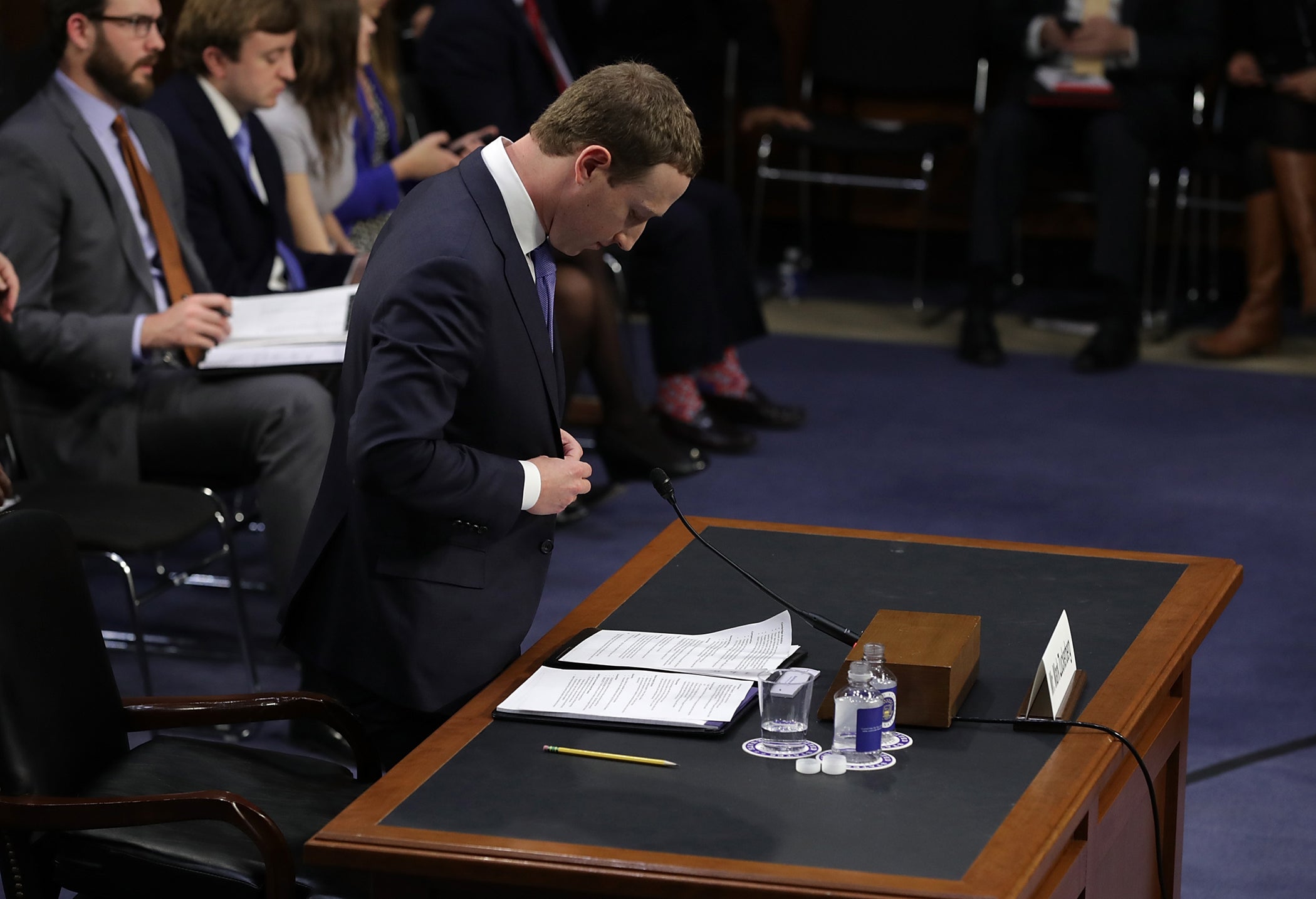 The theory that Facebook activates background mics to listen in on users in order to display relevant ads came up in the hearing, but Zuckerberg flat-out denied it, calling the idea a "conspiracy theory." Michigan Sen. Gary Peters asked if Facebook used microphones to inform advertising data and specified that he wanted a yes or no answer. Zuckerberg said no, but he did share that Facebook can use audio from videos uploaded by users.

In the case of an award for most awkward silence during the hearing, Illinois Sen. Dick Durbin would be a clear winner. In making a point about personal information and privacy, Durbin asked Zuckerberg if he'd feel comfortable sharing the name of the hotel he stayed in. After a laugh and a pause, Zuckerberg said no -- and viewers wondered where Durbin was going with the line of questioning. The senator then asked if Zuckerberg would share who he'd recently talked with on Messenger, and the CEO declined again.

Last week, Facebook admitted that "malicious actors" might have scraped public profile data from more than 2 billion users. In Wednesday's House hearing, New Mexico Rep. Ben Luján reprimanded Zuckerberg for not shutting down the feature that allowed data scraping sooner -- even though the company was likely aware of the practice in 2013 and 2015. "You didn't turn the feature off until Wednesday of last week," Lujan said. "This is essentially a tool for these malicious actors to steal a person's identity and put the finishing touches on it."

Facebook's initial response to finding out about Cambridge Analytica in 2015 is murky at best. California Sen. Kamala Harris asked Zuckerberg about internal company conversations immediately after the company found out about Cambridge Analytica's misuse of user data -- and why users weren't notified right away. Zuckerberg replied, "I wasn't in a lot of meetings on the subject" and admitted that he couldn't speak to whether there was a meeting at the time. In fact, it was only this week that Facebook users have begun to be notified if their data was harvested by Cambridge Analytica.

Another key point? Facebook didn't announce it was suspending Cambridge Analytica from the platform until March 16, 2018 -- and that timing coordinates with investigative pieces published by The New York Times and The Guardian. In Wednesday's hearing, Zuckerberg disclosed that his own profile data had also been sold to a malicious third party.

Texas Sen. Ted Cruz asked Zuckerberg about suppressing conservative content, suggesting Facebook had a "pervasive pattern of bias and political censorship." He referenced Gizmodo's 2016 reporting that Facebook routinely suppressed conservative-leaning news from its trending section -- as well as the idea that Facebook shut down both the "Chick-fil-A Appreciation Day" page and the page of two pro-Trump personalities known as "Diamond and Silk." Zuckerberg still hasn't shed light on the News Feed algorithm and how it treats right- and left-leaning content. However, when Louisiana Rep. Steve Scalise asked on Wednesday if Facebook gave special permissions to President Barack Obama's 2012 election campaign, Zuckerberg said the company treated all candidates equally.

Most out-of-left field example goes to Florida Sen. Bill Nelson. "[Let's say] I'm communicating with my friends on Facebook and indicate that I love a certain kind of chocolate, and all of a sudden I start receiving advertisements for chocolate," Nelson said. "What if I don't want to receive those commercial advertisements?" Zuckerberg responded that people have the ability to "turn off third-party information" if they don't want their ads to be targeted using their personal information.

Nelson asked the CEO a more pointed question about personal data and ads. "If it got … more personal … and I want to cut it off, I'm going to have to pay you in order not to send me, using my personal information, something that I don't want?" Zuckerberg said yes. When Utah Senator Orrin Hatch touched on the same idea in his questioning, Zuckerberg said that "a version of Facebook" would always be free. In another section of the hearing, the CEO clarified: "In order to not run ads at all, we would still need some sort of business model." 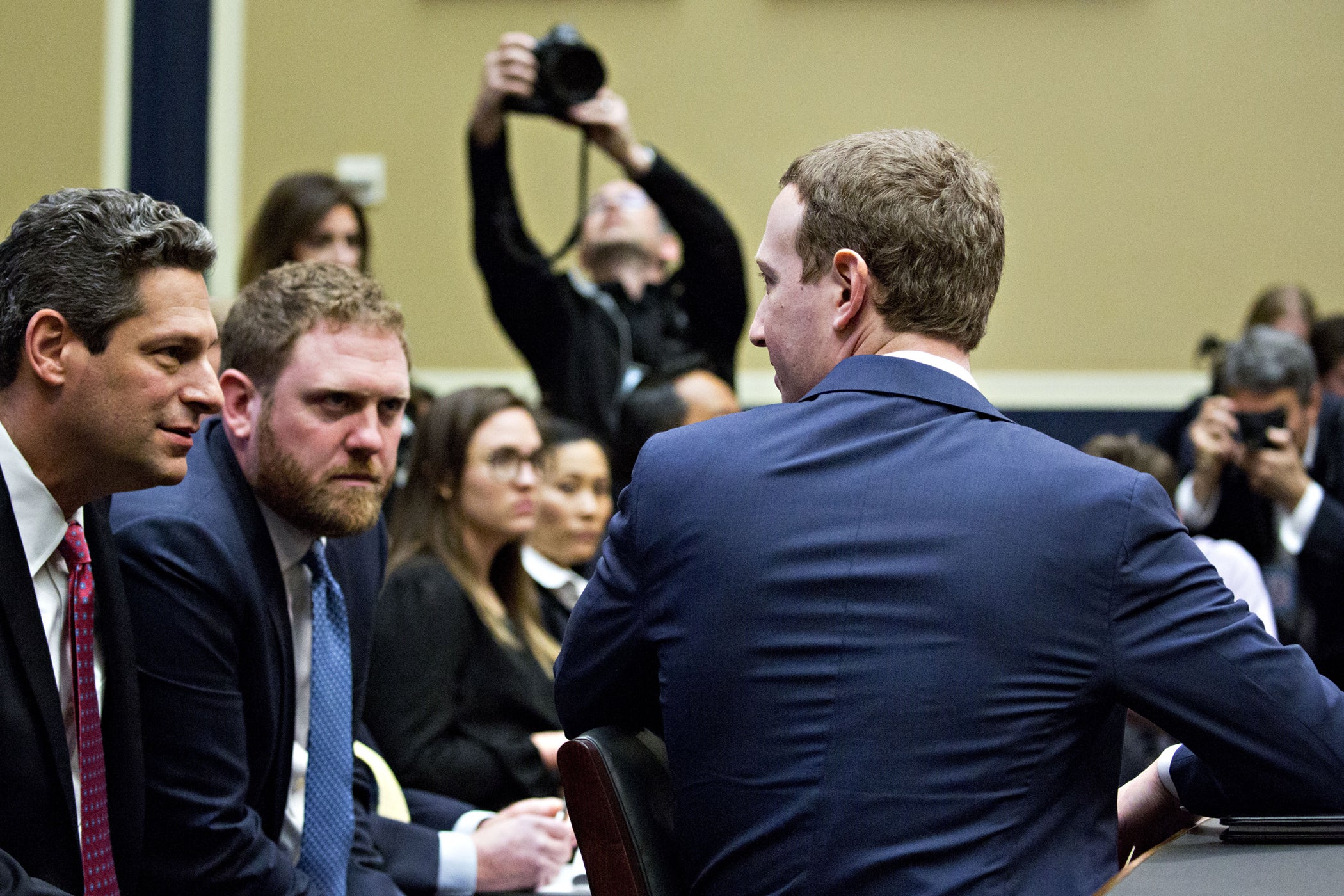 Multiple senators asked Zuckerberg about Facebook's sale of user data to advertisers, but he was clear on the platform's stance, saying that the company doesn't provide data to advertisers; instead, Facebook places the ads itself based on who advertisers want to reach. "If an advertiser comes to us and says, "Alright, I'm a ski shop and I want to sell skis to women,' then we might have some sense because people shared skiing-related content or said they were interested in that," he said. "They shared whether they're a woman. And then we can show the ads to the right people without that data ever changing hands and going to the advertiser."

South Carolina Sen. Lindsey Graham and Zuckerberg sparred over whether Facebook could be classified as a monopoly. The CEO initially balked when asked to identify Facebook's largest competitor, eventually naming the likes of Google and Amazon. Graham kept on pressing with the example that if he bought a Ford and didn't like it, he could then purchase a Chevy. "If I'm upset with Facebook, what's the equivalent product I can go sign up for?" Graham asked. Later on, when Graham asked, "You don't think you have a monopoly?" Zuckerberg replied, "It certainly doesn't feel that way to me." But Graham made his point: If Facebook buys up competitors (Instagram) or introduces its own version of their products (Snapchat), how can the company self-regulate?

Louisiana Sen. John Kennedy called out Zuckerberg on his platform's user agreement, saying it was established to protect Facebook from a legal standpoint and not with user experience in mind. "Your user agreement sucks," said Kennedy, urging the CEO to rewrite it in layman's terms. Zuckerberg admitted that most people probably don't read the agreement in its entirety.

Missouri Sen. Roy Blunt's son Charlie might be en route to Instagram stardom thanks to his father's shoutout on national television. "My son Charlie, who's 13, is dedicated to Instagram, so he'd want to be sure I mention him while I was here with you," he said.