Are there Twitter mulligans? The Golf Channel wants to know after it tried and failed with a Tweet commemorating the March on Washington.

"I have a dream." For most, that's a phrase from Martin Luther King Jr's legendary speech at the March on Washington, one of the largest civil rights demonstrations of its time held 50 years ago. For The Golf Channel, it was an opportunity for a ham-fisted social media promotion. Twitter users could tweet their favorite golf dream. The account even helpfully created a rubric to follow: "I have a dream that______."

We don't have any footage of the conversation that occurred about the brainstorming for this concept, if any did occur, but I hope it went like this:

Person 1: We need a news peg for our tweets tomorrow.

Person 2: Well, it's the anniversary of the March on Washington.

Person 2: Yeah, but the March will be a huge news event on Twitter. Just huge.

Person 2: That's right! Martin Luther King Jr! The "I Have a Dream" Speech. We can ask people for their golf dreams.

Person 1: Golf is a famously segregated sport. Do we want to call attention to this?

Person 2: This is a great idea. I'm so glad I thought of it.

Person 1: We're not really going to do this, are we? 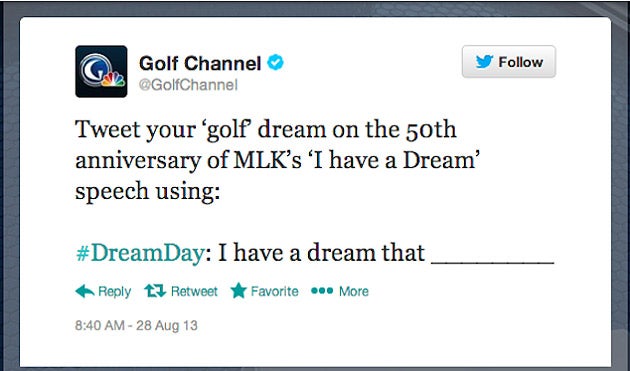 This is (at least) the second time that a brand has "newsjacked" a civil rights anniversary. Taco Bell did this last year: 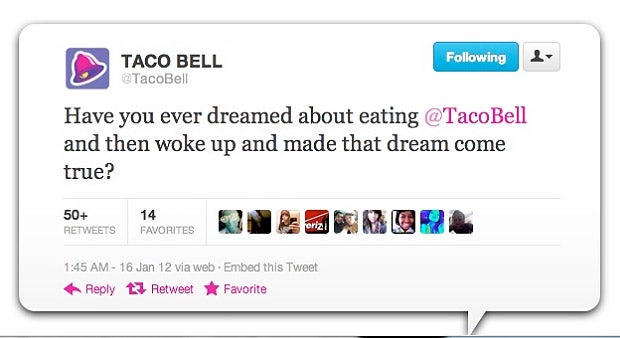 You'd think the Internet would have learned.

To be fair, The Golf Channel has since deleted the tweet and apologized. Unfortunately, 2013 is a hot-bed of milestone anniversaries, including the assassination of John F. Kennedy on November 22. This doesn't even count the annual commemoration of important events like 9/11 and the attack on Pearl Harbor. This seems like a virtual minefield and I've put together three guidelines to help companies evaluate when to use an historical or news event as a branding opportunity.

1. It's not about you. Tweets about news and historical events are conversations that aren't about your brand. So join the conversation at hand and think about that event, not your company. This is especially important if the event you're commemorating involves people who sacrificed, struggled or even gave their lives.

2. Give tribute. Honor who's involved. Share a photo or a quote. Remind us why the event is important. Or just say thank you and get out of the way.

3. Be good. Clever tweets aren't easy. If there is any risk at all that your tweet could be seen as co-opting a newsevent for clicks and pageviews, then just stop short and delete your tweet. If you don't, you might find yourself explaining your reasoning not just to your boss' boss, but to Gawker, the Huffington Post and a host of other media outlets.