5 Ways to Work Harder, Courtesy of a Beijing Restaurateur

An overseas trip provides some insights about how an entrepreneur can prevail in realizing his dreams.

I believe we entrepreneurs are the most powerful people in the world: We turn ideas into realities for the better of our society. We work hard and do everything that we can to bring our ideas to life.

Last month while on a trip to China I came across the hardest-working person I've ever met. I first met Mao Mao four years ago during my junior year of high school when I lived in Beijing.

I was a foreign exchange student that year through School Year Abroad, living with a host family and attending a Chinese high school. Almost every afternoon, my friends and I went to Mao Mao's restaurant. This wasn't just any type of restaurant though: It was a hole-in-the wall barbecue stand, with pop-up tables on the street.

Two years ago I returned to Beijing and after visiting my old teachers, I went to Mao Mao's eatery. He had expanded his operation a bit. His barbecue stand now occupied a space in the wall. He still had tables out in the street, though.

Last month I returned to Beijing again and visited Mao Mao's establishment. This time I was amazed to see he had taken over a storefront space. He still made his classic barbecue dishes, but I was in shock to see his restaurant's expansion: He now had tables inside. He had a refrigerator of cold drinks, and his restaurant business was booming. He wasn't running a food stand anymore: Mao Mao was running an actual restaurant on Xin Jie Kou Wai Da Jie right next to the Second High School attached to Beijing Normal University. Its name in Chinese translates to Mao Mao Barbecue Skewers.

I wanted to know how Mao Mao grew his business. I could tell it wasn't just a matter of luck. I asked him about how the business evolved. Here is what he taught me about hard work: 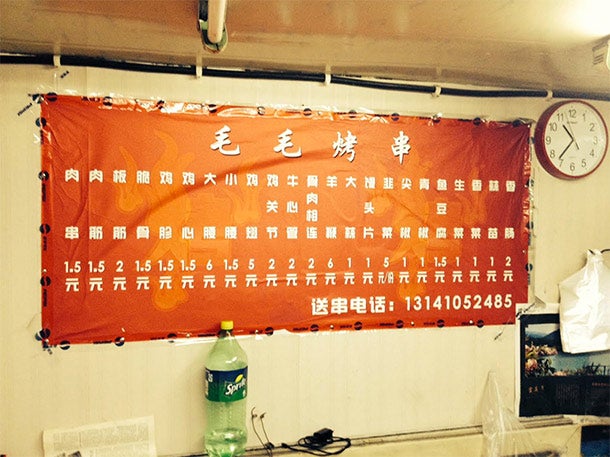 Related: Aim for a Big Bite of the Restaurant Market With These 7 Steps to a Successful Launch

Mao Mao's schedule was unbelievable. Every day (seven days a week), he went to sleep at 4 a.m. and rose by 10 a.m. Even though his barbecue eatery did not open until the afternoon, in the mornings he prepared everything.

Preparation is essential because a businessperson should work as effectively as possible.

Mao Mao told me he had been trying to expand his business into a storefront space for the past two years. The landlord told him no countless of times, but he didn't give up.

Perseverance is essential. Why work for something that won't last? Mao Mao had the vision for his restaurant and wouldn't let it go.

Related: Stop Asking, Who Knows Where the Time Goes? An Entrepreneur's Guide to Focus.

Whenever Mao Mao was at his stand or restaurant, he always focused on his business. Mao Mao said he would only check his phone once an hour, if that.

Entrepreneurs should limit distractions to ensure that they can work as hard as possible.

The vision for Mao Mao's barbecue restaurant came to him five years ago. He knew he couldn't start a big eatery so he began with a stand in order to learn the fundamentals of the business.

Every hardworking entrepreneur should understand thoroughly what it takes to bring their products to their customers.

Though Mao Mao hardly sleeps, he is always looking at the clock -- not to see when he can close up shop but to better manage his busy hours.

Use analytical tools to work even more effectively. Entrepreneurs should cross-reference the way they work to the time of day. It's possible to discover some things come more easily in the morning than the afternoon.

Hard work is an essential part of the entrepreneurial menu. Anyone can work a 9-to-5 job, but not all individuals have what it takes to turn an idea into a reality. Before launching an enterprise, learn everything and anything about what it will take to grow a business. Mao Mao knew his goals and understood what it would take to accomplish them. Don't just rely on output, but work effectively to attain specific goals.

Related: Why China Is Just as Important as Breakfast in the Fast-Food Wars

Nathan Resnick is a serial entrepreneur who currently serves as CEO of Sourcify, a platform that makes manufacturing easy. He has also brought dozens of products to life over the course of his career.