Backed by Silicon Valley heavyweights, Votizen co-founder Jason Putorti talks to us about changing the future of campaigning. 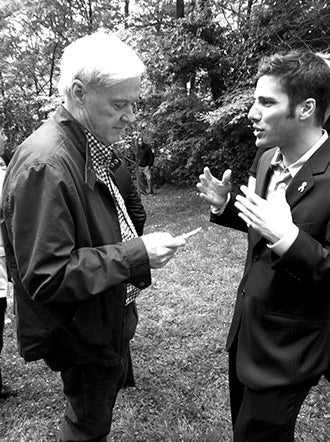 In a big election year, it isn't surprising that some entrepreneurs are making politics the focus of their business ventures. One of the most buzzworthy of this crop of startups is Votizen, a platform that lets you turn your social connections into voting blocs.

We spoke with co-founder Jason Putorti, 30, by email to find out how the Mountain View, Calif., startup has gotten support from such name-brand backers as the Founders Fund, A-Grade Investments and Steve Blank. What follows is an edited version of our exchange.

Entrepreneur: What is your background, and how did Votizen come about?
Putorti: I come to Votizen as someone who's just been a political junkie since the 2000 recount, but always as a consumer and not a participant. My first job in Silicon Valley was as the lead designer of Mint.com, which took me through the 2008 election. The confluence of this exciting election and me working in the center of the tech sector convinced me that I should apply what I know to politics. I met my co-founder, David Binetti, through mutual friends. We were both thinking about how to use technology to disrupt a broken political process, just in slightly different ways. We decided that we'd be better off together, so we made it happen and joined forces in July 2010. We launched the first product that we built together in March 2011.

Related: The Man Who's Turning Cities Into Trivia Games

Entrepreneur: What makes Votizen valuable both to voters and to campaigns?
Putorti: For voters it's a very deterministic way to have an impact on elections anywhere you have friends. The Votizen product will tell you which of your friends can vote, and which races they can actually cast a ballot in. So if you really care about the Massachusetts Senate race but live in California, we'll tell you which friends you have on Facebook, Twitter or LinkedIn that are likely to vote for the candidate you choose, and you're provided a way to privately message them and ask them to turn out. Over time, the people who can turn out the most votes, as we know through election returns, will surface as politically influential in Votizen. The big donors of today will be replaced by the social-media influencers of tomorrow.

Campaigns are putting their own supporters on the system. They actually have their own custom interface that [allows them] to manage a large number of supporters and coordinate their efforts. Whereas you the single voter can pick many different races to work on, the campaigns can see many supporters and what work they're doing for a single candidate.

Entrepreneur: What are some challenges you've dealt with while building Votizen?
Putorti: Technically our biggest challenge has been figuring out how to discover voters in a social network. When we first started out, we only had the technology for people to be able to claim their own record, and use it to connect to their officials and candidates. Later we developed the ability in real-time for a user to see all the races they could affect through their friend networks.

The ongoing business challenge for us, like every other consumer web startup, is getting enough people on the platform. Right now, we're working with campaigns since they have the built-in organizations, but in order to achieve our true vision, we need to have enough people on the platform so that they can self-organize, form new voting blocs and demand new politicians that better fit their values.

Entrepreneur: What is your big vision for the platform?
Putorti: Ultimately we'd like to replace the existing mass-media model of winning votes with something much cheaper and more democratic. Pennies per vote or action instead of tens or hundreds of dollars per vote. That could take the form of a cost-per-vote model, a cost-per-introduction model (between those super-connector citizens I mentioned earlier and candidates running where they have influence), a combination or something else entirely.

Entrepreneur: What part do you hope Votizen will play in future elections?
Putorti: We're going to return to our public policy roots in 2013, and we expect to play a major role in 2013 races, for example the [Los Angeles and New York] mayoral elections [and] the Virginia governorship.

I hope in 2014/16 we see new candidates connecting with voters on our platform. I don't want good potential representatives deterred by [lack of] access to large donors, or how the political process works today. I want them to be able to win enough votes by being able to build relationships with voters -- a more retail approach and truer to our Framers' vision.