As outdoor athletes move from extreme to death-defying, POC rises up to protect them from themselves.

By Marc Peruzzi & Pieter van Noordennen
May 19, 2009
Opinions expressed by Entrepreneur contributors are their own. 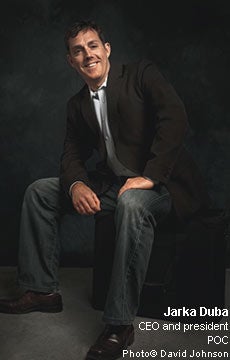 Five years ago, Stefan Ytterborn was watching his kids ski race--but instead of focusing on their turns, he couldn't get his mind off their flimsy head gear. The Swedish industrial designer, who has worked for Volvo and Ikea, brought his concerns to Dr. Claes Hultling, an M.D. who devoted his practice to spinal cord injuries after a diving accident paralyzed three of his limbs. Ytterborn, 42, had one simple question: "How do we build a safer ski helmet?"

The answer was POC's first super-safe, but stylish, helmet. Hoping to market it at the 2006 Turin Winter Olympics, but unable to sign on any of Europe's powerhouse ski teams, he approached the U.S. team. A few months later, photogenic Olympic star Julia Mancuso was dancing around the giant slalom finish line, celebrating her gold medal while wearing a POC lid.

Things snowballed from there. The day after Mancuso's victory, former product manager Jarka Duba, who was interested in importing European ski gear, locked in POC's U.S. distribution. "At first, I was the only employee working out of my apartment in New Hampshire and shipping three hours a day," recalls Duba, 36, now the CEO and president of POC USA, which is based in Portsmouth, New Hampshire.

Today, POC's U.S. arm, which employs six and commissions 12 sales groups and 18 independent sales reps, has doubled its size annually. Internationally, POC, which distributes its gear in 27 countries, has moved below the neck and is producing sleek, high-quality protective gear, like shin guards and chest plates, for mountain bikers and BMX racers. As the first company to produce protection for the entire body, it's set to own the category, head to toe.

Eddie's Energy Bars: These all-natural, homemade, mail-order bars are the darling of elite athletes. And the company is banking that the rest of us will follow their lead.

FRS: This popular Lance Armstrong-endorsed energy drink and supplement brand harnesses the power of the plant extract Quercetin, which university studies have shown boosts speed up to 3 percent.

Massage Envy: Moving massage from an infrequent luxury to a post-workout staple is Envy's business model--an idea that now has franchises rubbing people the right way in 45 states.

Snap Fitness: These lean, mean, neighborhood-sized gyms are filling the fitness niche in rural communities and suburbs--to the tune of 700 franchises operating in 44 states, and another 700 franchises set to open.