Bud Light Introduces New Label, But How Effective Can It Actually Be?

Anheuser-Busch tries to pull in millennials and reassert its historic legacy with bold, nearly all blue design that prominently features the company's historic crest.

Anheuser-Busch needs its new Bud Light label to woo millennial beer drinkers and reintroduce Bud Light as an authentic, legacy brand with a longstanding history. That's a lot to ask of a label.

Bud Light is the most popular beer in the U.S. by far. It had off-premise sales of $5.7 billion in 2015 through the end of November, according to data from Chicago-based market research firm IRI. That's 18.5 percent of the total dollars spent on beer at liquor stores, convenience stores, supermarkets, mass market retailers, military commissaries and any other location where you buy beer, pay at a cash register and then drink off site. It's also more than twice what beer drinkers spent on the second most popular beer in the U.S., Coors Light, in the same category.

Anheuser-Busch, the parent company of Bud Light, has been brewing beer for more than 160 years. Its family of beer brands dominates almost 50 percent of the U.S. beer industry. Despite its dominance, the volume of Bud Light sold has been falling for the past seven years, according to Eric Shepard, the executive editor of Beer Marketer's Insights, the industry's trade publication. And so the company is trying to win favor with younger beer drinkers, he says.

"Millennial consumers are more promiscuous in their brand choices, especially in alcohol beverages, than preceding generations. They are more likely to drink across brands and across beer, wine and spirits. They also tend to be more skeptical of big brands like Bud Light," Shepard writes in an email to Entrepreneur. "Anheuser-Busch is seeking to find the right look and messaging to attract more millennial drinkers, who may have never even consumed Bud Light, while maintaining brand loyalty among established drinkers of the brand."

The new Bud Light design is the first upgrade the light beer packaging has had in eight years, according to a statement from Anheuser-Busch announcing the new visual design. It will begin appearing on both bottles and cans in the spring of 2016. In the meantime, the build up to the rollout of the new design is a sort of marketing campaign in its own right.

"Legacy is no guarantee for success. In order for a brew to generate bucks, it's got to stay relevant, stand out and change with the times," says Karen Post, the president of Brain Tattoo Branding, in an email to Entrepreneur.

Ushering in a bold new era.

Some legacy brewhouses have opted to go full retro with recent brand redesigns. For example, last year, Miller Lite brought back its iconic can design from the '70s. Had Anheuser-Busch wanted to pull a similar move, it would have brought back a version of the old red and white cans from the 1980s and 1990s, says Nick Petrillo, a research analyst at IBISWorld covering the alcoholic beverage industry.

"They are trying to push the brand design towards the next decade, towards the next 20 years," Petrillo says. "It seems like it is something very forward thinking as opposed to, "Let's take a step back,' and, "Let's try to sell this brand off of people's nostalgia.' I don't really think that is what they are going for here." 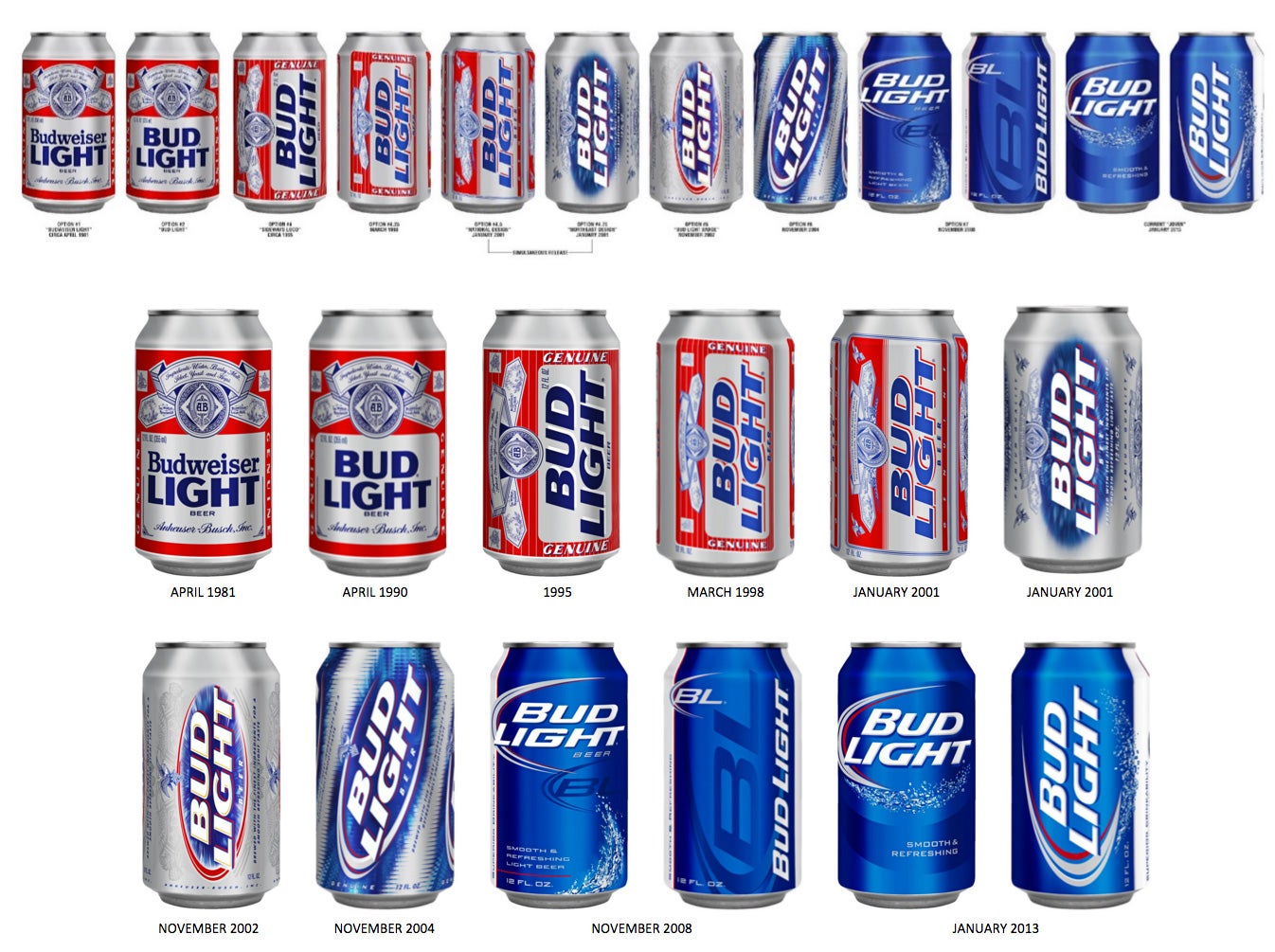 The new Bud Light label is almost entirely blue, and that's a strong statement, says Laura Ries, a brand strategist and president of Reis and Reis in Atlanta, Ga. Consider how Apple went from a rainbow going through the apple to an all white logo, how Home Depot's logo is all one bright orange or how Coors owns the silver bottle, she notes.

"Single colors are much more striking and differentiate your brand on the shelf where there is so much confusion," Ries says. Single-color brands help consumers remember a company, too. "This distinctive blue certainly does that compared to their previous designs."

Getting over the Bud Light Lime-A-Rita hangover.

Prominently displaying the old crest is a way for Bud Light to reassert its historical legacy. Craft beers have been winning the authenticity game in the beer aisle of late. "They are feeling the heat from smaller, crafty labels and brands," Post says.

In 1978, there were fewer than 100 breweries. Now, there are more than 4,100, according to Julia Herz, the craft beer program director at the Brewers Association.

To be sure, Bud Light hurt itself by adding a bevy of fruity spin-offs to the brand, such as Bud Light Lime-A-Rita, according to Ries. While rolling out new beer flavors may result in some short term boost to the bottom line with curious shoppers giving a new flavor a try, it was ultimately a distraction. Shoppers may try the fruity beer for a party once, but chances are, that's it, says Ries. The new brand with the large historic crest "is an attempt to establish authenticity" as a serious brewmaster, she says.

Whether Bud Light can both catch the attention of new customers and reassert its own authenticity remains to be seen, but either way, launching new packaging gets people talking and generates buzz. (For example, I am writing this very story.) That's precisely the point.

Rebranding is a form of marking, Petrillo says. When you launch a new brand, there is the associated attention that the new design brings to the company. "They kind of justify this expense as also being marketing, too," he says. "By reintroducing the brand, by re-energizing it with a different look can serve that same marketing purpose even though, by definition, it is not really marketing."

A new label is no magic trick.

Bud Light got some short-run momentum off of its controversial "Up for Whatever" marketing campaign, but sales to retailers were down in the third quarter, according to the most recent quarterly financial disclosures. Anheuser-Busch said it lost market share in the premium light beer segment in the first nine months of 2015. It will take a lot more than a new visual brand to make consumers completely change their shopping behaviors.

"This alone is not going to change people's perceptions of Bud Light," says Reis, who predicts it won't lead to increased sales.

But what the new blue bottle will do is help customers notice Bud Light in crowded beer coolers more easily.

"It's going to make them stand out and get noticed and be more visible out there in the world," Ries says, "whether it is on the shelf or in the bar."