How small retailers are building new kinds of stores. 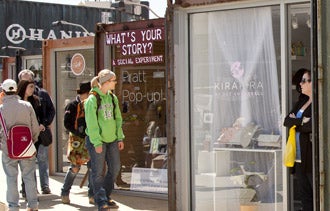 When Carlos-Ameen Jureidini-Cully started selling refurbished sunglasses in 2008, he knew he couldn't swing the high rent or multi-year commitment that a shop in New York City would entail. Instead, he sold his products at street fairs and festivals, making the rounds at as many as 40 events a year.

But hoping to have a fixed retail space, he finally found a way to make it happen last year: setting up shop inside a large, refurbished steel shipping container. For $1,400 a month including utilities, Jureidini-Cully now occupies a 160-square-foot space in the Dekalb Market, a Brooklyn, N.Y., complex of 60 retailers housed in shipping containers. The rent is affordable, and the one-year lease means he doesn't have to make a long-term commitment.

Related: Encouraging Employees to Put Their Personal Stamp on the Workplace

Since opening his shop, 66 Blak Birds, he has been able to raise prices for his sunglasses by at least $40 a pair. "In the street people are only willing to spend so much," he says. "Being in a retail space allows me to control how my product is presented. It enables me to charge a premium."

Retail spaces in refurbished shipping containers are becoming increasingly popular as designers find ways to reuse the vacant large containers that carried imports to the U.S. on cargo ships. This bricks-and-mortar alternative appeals to small businesses that aren't yet able to afford a more expensive, traditional retail space.

But affordability is not the only benefit. Shipping container stores clustered together like the ones in Dekalb Market draw more interest from consumers than a stand-alone shop would, says Eldon Scott, president of Urban Space, the New York City-based market developer that created the market. "Just the launching of Dekalb Market [in July 2011] has started a ripple of interest," he says. "People seem to find the space interesting." He is working on another larger market made of shipping containers that is scheduled to open in Manhattan's meatpacking district in the next few years.

Robert Humble, principal at HyBrid Architecture, a Seattle-based firm that has designed a number of shipping container projects, is working on a new market in Seattle where small merchants will be housed in containers beside ones run by larger retailers like Target. "There's a certain built-in marketing cachet that [container stores] have that other businesses don't," Humble says.

Some small merchants are buying shipping containers rather than renting. The building process requires complicated permit approval given the relative newness of this type of structure, but as owners of the containers, entrepreneurs can transport their shops wherever they like.

When Kirk Lance shut down the two Mexican restaurants he owned and operated at strip malls in Wyoming, he lost the $200,000 he had invested in designing their interiors. He promised himself that he would not open another restaurant unless he owned every square inch of the space. A year later, while driving down Interstate 5 in Portland, Ore., he noticed a lot filled with hundreds of empty shipping containers and knew what he needed to do. "They are a resource that's sitting there waiting to be tapped into," he says.

For $3,000, Lance bought one of these containers and spent $125,000 refurbishing it with insulation, framing, heating, plumbing, electricity and air conditioning. Because of permit complications, the process took four years, but in 2009, he opened the newly transformed 8-by-40 foot steel container as Aprisa Mexican Cuisine. The restaurant's popularity motivated Lance to franchise the business, with plans to open the first three Aprisa franchises—also housed in shipping containers—in Phoenix this year.

Portability is one of the most appealing features of shipping container shops. Eileen Hassi, owner of San Francisco-based Ritual Coffee Roasters, already operated three coffee bars in traditional retail spaces, but she liked the idea of a coffee bar that she could put on a truck and move to a new location whenever she felt ready for a change. In 2011, she opened a fourth coffee bar alongside a handful of other retailers housed in shipping containers on a vacant piece of land slated for a housing development. The coffee bar's mobility means that when it comes time to vacate the space, Hassi won't lose her shop. "I can just take my building somewhere else and hook it up to water and power," she says.

San Francisco's mild weather is conducive to container stores, but the winter months can be challenging in other areas. Although the containers can be insulated to resist the cold, it's an expensive process. That's one reason the Dekalb Market in Brooklyn closes down each winter.

When the market reopened this year, Jureidini-Cully was not only back at 66 Blak Birds, but he also launched a chicken wings eatery called Dekalb Wings in a nearby container. The low-risk rental seemed like the perfect chance to test out a new business idea. "I figured I might as well go after it," he says. "It was a great opportunity to see if we had something the market wanted and fine-tune it."