Have you ever met someone at an industry happy hour, hit it off, talked about things work and non-work, and then had a mini freakout when it came time to exchange contact information? Should you give this individual your work email address? Your business card? Your personal cell number? Your Twitter handle? Should you find each other on Facebook? What if you give your cell number and she gives you her email? Awkward.

That's the problem a new app called Knock Knock wants to solve. The app, which launches today for free on both Apple and Android devices, allows a user to instantly connect with a nearby user by knocking on his own phone twice. Within the app, users choose what information, from Facebook to Instagram to phone number to email addresses to Snapchat names, they want to share and with whom.

If a group of people who all have the app want to be connected, one person needs to open the app and everyone else needs to knock twice on their phone to connect with everyone else in the group. You can share different information with different members of the group. For example, you can choose to give the guy to your left your personal cell number, but the lady to your right, you only want to have your professional Twitter handle.

Users can chat within the app either as a group or individually.

Another function of the app is location sharing. By logging into the app, you can see who else is near you and simultaneously broadcast your location to other users.

Related: How to Network When You're an Introvert

Knock Knock is the work of the Humin co-founders, Ankur Jain and David Wyler, and it builds upon the infrastructure of the Humin augmented reality network, which organizes all of your contacts based on when you met them, where, with whom, with relevant images and social media handles. In addition to giving users an awkwardness-free, business-card-free, data-entry-free way to exchange contact information, Knock Knock also lets users know who from their contacts is nearby.

Knock Knock and Humin are both built upon the premise that technology is only going to get more and more omnipresent in our lives and that it also, eventually, Internet connectivity will be embedded in every corner of the globe and within every possible device.

"The question is how do you provide value-added services to people in a world where you are not locked behind a screen like this but where it is augmented everywhere. And the only way to provide that is not to have all the information everywhere you go, because that would be overwhelming, but it is knowing what information is relevant to you, the specific individual, and when," says Jain. "The only way you can do that, I believe, is understanding the context of how you relate to the things around you."

Jain and Wyler, who met in college and built the elite, global entrepreneur network Kairos Society for people 25 and younger, were both featured on the most recent Forbes 30 Under 30 list. Ankur's father is a successful Silicon Valley serial entrepreneur. Established relationships and a successful track record helped Jain and Wyler raise an undisclosed amount of money in a friends and family round large enough to keep 32 employees humming along for two years in a downtown San Francisco office working on app before it launched. The blockbuster list of early investors include Richard Branson, will.i.am, and Sophia Bush. 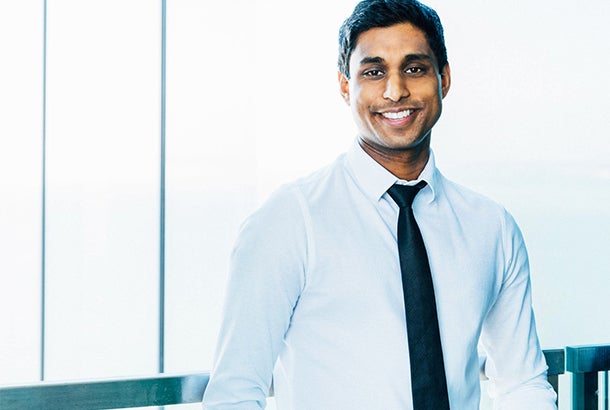 Related: 'Owning' a Room, Even When You Don't Feel That You Can

The app is currently free, but down the line there will be a premium version of the app with additional services available for a fee. Also, the data that Knock Knock will collect about each user is valuable; while the team wouldn't expound further on the specifics of a revenue model, you can slice and dice that kind of information in a lot of profitable ways.

Before today's public launch, Knock Knock had a couple thousand beta users with nearly 60,000 users on the waitlist. The Knock Knock team will roll out the app to college campuses first, a-la Facebook. First up will be Harvard, Cornell, University of Pennsylvania, Stanford, Berkeley, and USC.

The tapping concept associated with Knock Knock may ring a bell. That bell may well be Bump, an app that allowed people to swap contact information and share files by tapping their phones against one another. Google acquired Bump in September of 2013 and then promptly shut it down a few short months later, with Bump CEO David Lieb saying the team was "deeply focused on our new projects within Google."

Jain and Wyler aren't phased by the Bump shutdown. They say that where Bump was basically a digital replacement for a business card, Knock Knock is about facilitating smart social networking. "We are trying to build an augmented memory, who you are with, where you met them, when you met them, without even taking your phone out of your pocket. The contact sharing element is a function of what lets you stay in touch, it is not the primary purpose," says Jain. Where Bump was used exclusively for sharing files and contact information, Knock Knock wants you to use the app to remind you why and how you know people and when they are nearby.

Whether or not it will be successful depends, though, on whether the gesture "knocking" technology actually works consistently and smoothly. Nobody wants to be repeatedly hitting their phone at a party as they are trying to get the app to connect -- that actually undermines the whole "take out the awkwardness" sell.

The success of the app will also depend on whether the team can get a critical mass of users. Even the most gorgeously designed and seamlessly functioning social network is pretty much useless if there are only a small group of friends in San Francisco using it.

Related: How to Host an Incredible Networking Dinner