In 1981, Essie Weingarten boarded a plane for Las Vegas carrying enough nail polish to send today's security agents into a meltdown. "I took 10 cartons weighing 64 pounds each," she says, in her no-nonsense Queens, N.Y., accent. In pre-9/11 days, whatever amount of luggage you took to the airport went on the plane.

Weingarten, known simply as "Essie" for her namesake nail polish brand, had just left her career as a hosiery fashion buyer to devote her energy full-time to her nascent nail polish business. She knew that tapping the Vegas market could send her business skyrocketing. "If I go to Las Vegas, I have more women with disposable income than anywhere else. I have my dealers, my dancers, my cocktail waitresses, my showgirls. And they all had to be well groomed, well dressed and they were in front of the public at the time. So if I could get them to wear it and talk about it, it would spread like wildfire," she said.

And boy was she right. Essie went to all of the beauty salons in fancy casino-hotels and left samples of her nail colors. Within 10 days, every single one had called to place an order.

Related: How This Entrepreneur Cut Into an Industry of Billion-Dollar Goliaths

Once Essie's exciting, vibrant color palette hit Vegas, women visiting from all over the U.S. spread the word. "What happens in Vegas doesn't stay in Vegas, necessarily," says Essie. "We had women on vacation that went to the salons, loved the product, went back to their home in Texas or Florida or Illinois or Massachusetts and we started getting calls from all over the country."

Today, Essie is arguably the best-known nail polish brand in America and a staple of salons, drugstores and cosmetic retailers across the world. The company was sold to L'Oreal four years ago but has remained true to its roots – offering customers high-quality color in playfully-named shades. And like so many great businesses, it was born out of an organic, long-lasting passion.

Essie Weingarten's fascination with nail polish began at a young age, and during more conservative times. Today, anything goes in terms of nail décor, but when Essie was growing up in the 1950s, the color set was limited to a red, a pink, maybe a nude or a beige. That drove her crazy. "When I was younger, it was the ultimate treat if my mother would take me to the beauty salon. Because there was no such thing as a nail salon," she says. "There would usually be one woman in the beauty salon who would be the manicurist and if you chose you could have a manicure. And I loved getting my nails done. But I felt, as a little girl, that the colors in the salon were quite boring."

Essie's father would sometimes take her to her Uncle Ralph's apothecary in midtown Manhattan, in the building that is now Apple's flagship, to pick out nail polishes. "I would hold that bottle all week in my hand until perspiration would be running down my little arm, because that was really my conscience. I really wanted to be a bad girl, but I knew if I was a bad girl -- if I pinched my little sister or pulled her hair -- my mother wouldn't take me on Saturday," she recalls. 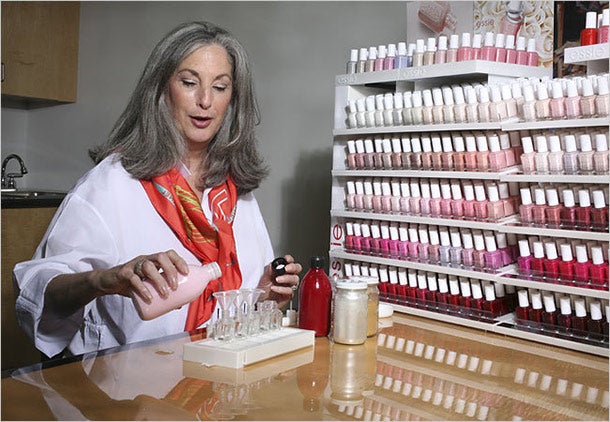 There are about 900 shades of nail polish in the Essie collection.
Image credit: Essie Cosmetics.

Essie's childhood joy ultimately grew into a multimillion-dollar empire. In the early '80s, she partnered with a chemist to come up with her first dozen colors and, with enough money to support herself for a year, she struck out on her own and hopped that plane to Vegas. Essie's first hire was her husband. And it was his suggestion to put her name on the bottle. "I was horrified. But he was right and I was wrong," says Essie.

Essie and her $8.50-a-bottle nail polish collection on the map. In the 1989, Queen Elizabeth's hairdresser wrote a letter to Essie requesting an order of a pale-pink polish called Ballet Slippers because it was the color of choice of Her Majesty. "It was the turning point in my life," says Essie of getting a letter embossed with the Royal Crest. In 1983, Joan Rivers told The Tonight Show that she was wearing Essie's Jelly Apple nail color. When L'Oreal bought Essie in 2010, the company was bringing in $28 million in annual sales. "Not bad for a little girl from Queens," says Essie.

Not bad at all. Oh-so-appropriately, Essie was wearing a deep red hue called A-List during this interview.

The names of the nail polish colors -- now more than 900 strong -- are all painfully clever. Colors range from a deep-green color called Sew Psyched to a light-delicate blue called Rock the Boat and every orange, pink, red and nude shade you can dream up in between. Essie is responsible for the "majority" of the names and says they are either fashionable, inspirational or aspirational. She also has a soft spot for puns and wordplay. Take, for example, "Lapiz of Luxury."

Essie, 65, has stepped back from day-to-day operations and serves as the global brand consultant. She's become a style maven and just inked a deal with AOL to do a series of videos where she will answer fashion questions submitted with the hashtag "#askessie." (She already has some smart advice on what nail polish color to wear to a parent-teacher conference: "Well, it depends, is the kid good or bad? If your kid is really bad, I would wear something really crazy so the teacher can talk about your nails instead of your child.")

Essie's entrepreneurial fairytale has made her more than a fashion icon: it's made her an inspiration to aspiring entrepreneurs. "We were in Copenhagen and this woman was sitting in the first row and all of a sudden she burst into tears. And I am saying, "What did I say? Did I insult her?' And she said, "No. I have always had this idea and I have never had the guts and sitting here listening to you, I am going for it. And that's what's it is about -- inspiring other women who would love to do something, but never had the guts to do it. Go for it, baby."