The Seeds of Success

Business is blooming for 1-800Flowers.com, but it wasn't always that way for founder Jim McCann.

When you're a small-business owner yearning to be big, it's easy to get discouraged--especially if you compare yourself to the bigger companies that are already successful. But it's useful--for your morale, your sanity and your strategizing--to remember that most big businesses were once small, too.

So in that spirit, we decided to seek out Jim McCann, founder of 1-800Flowers.com, who symbolizes the idea of starting from an acorn and turning into a tree. 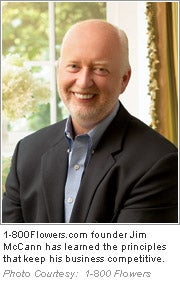 On his ubiquitous TV commercials, McCann may seem more like a spokesperson than someone unafraid to dig his hands in the entrepreneurial dirt--but that's exactly what McCann, 56, does every day and has, ever since opening his first flower store in New York City in 1976. Back then, it was called Flora Plenty, and McCann didn't even have a 1-800 number.

So if your business seems like a tiny acorn, how can you make it grow into a big, beautiful--rose bush? (Look, we wanted to go with oak tree, but that wouldn't have fit in with an article about the flower business.) McCann doesn't claim to know the secret, but looking back on how he did it, he does have some advice.

"Fire yourself right away, so you can hire people and focus on doing the things that you can do," McCann says. When he opened his flower shop, he was running a nonprofit for at-risk teenage boys, and he decided that he and his family would be better off financially if he kept his day job. So he hired someone to work at the store during the work days, and then from 9 p.m. to midnight, and during the weekends, he spent his time at Flora Plenty.

"My wife called these 'death-defying hours,' " McCann says."But it turned out to be good that I wasn't the only person in the shop." McCann says these hours forced him to work on the systems and processes of the business, not just run the store.

"Too often, you see entrepreneurs get hung up on doing the best job that they can, instead of creating an environment where their employees can do better," McCann says. "It was an accidental lesson."

Risk is part of being in business. Keeping his day job at the nonprofit and starting another business minimized his risk. But after 10 years, when McCann had about 15 stores throughout New York City, he took a much bigger gamble. It was, McCann says, his riskiest move in the history of his business. He bought the name 1-800 Flowers from another entrepreneur who hadn't been successful in owning the number.

"I found myself $7 million in debt, without realizing that it really was a colossally stupid deal," McCann says.

"But the good news was that Chris [his younger brother] had joined the company, and we paid down the debt over the next five years, and while it was a stupid deal, it was also the best thing we ever could have done."

It goes to show that taking a risk is a part of growing a business, but it needs to be a calculated one.

"You can be creative in your business without having a creative bone in your body," McCann says. He offers an example how years ago, he created a program called Fresh Rewards, where if you bought nine bouquets, that 10th one was free.

"People get a kick out of getting a free bouquet, and I remember people said that'll never work; nobody's going to use the card," McCann says. Of course, these rewards coupons are prevalent everywhere now.

McCann got the idea after walking into Dunkin' Donuts and buying some tea and a donut with his own loyalty card. He thought: How is this shaping my behavior?

"I'll look to other categories and industries and see if it's something I can try in my category," McCann says. "It's always helpful when you get three or four trade magazines from another industry, and look at the stories and their issues and think, 'How can I adapt that to my world?' Let someone else do the creative thinking for you."

Use paranoia as a business strategy.
McCann attributes his paranoia to Andy Grove's book, Only the Paranoid Survive. It compelled him and his brother to pay off their debt promptly and splurge on creating a website when the internet started getting popular.

"Staying paranoid is a good thing," asserts McCann, who mentions that recently, he had a meeting cancelled and used that time to rework a list he has of technology projects and plans for the company.

"I'm feeling like we're in a 1990 re-do actually," says McCann, who notes the next step is mobile technology. "We're in the business of helping people express themselves and connect, and we do that with floral and other gifts, by helping them act on their thoughtfulness. So if we can help them with mobile technology act more frequently on those thoughtful ideas, it's better for them, it's better for the people they're giving the gifts to, and it's good for us as a florist."