These 50 women have raised the most funding in each of their respective states.

Although states like California and New York get the most attention for being incubators of top startups, the reality is that every state in the U.S. is home to successful businesses. Also in every state? Successful female founders.

Using Crunchbase data, Business Financing pulled together a list of the top female founders by funding in all 50 states (plus Washington, D.C.). Despite data that shows female founders outperform male founders, they face heightened scrutiny when it comes to raising money — which is why these 50 women should be celebrated.

Out of all 50 women on the list, the founder who raised the most is Rebekah Neumann, co-founder of WeWork and The We Company, in New York state. Despite a botched IPO and bizarre reports that caused her and husband Adam Neumann to step down from their public-facing WeWork roles last year, Neumann did help raise $19.5 billion in funding. Following is Georgia's Kathryn Petralia, whose fintech company Kabbage has raised $2.5 billion from investors.

The strongest industry for female founders are biotech and health-related ventures. Founders in those fields had the most funding in 21 states. Though you might not recognize all of the brands, some are consumer-facing: Missouri's female founders with the most funding are Lori Coulter and Reshma Chattaram Chamberlin of influencer-favorite swim brand Summersalt, and D.C.'s is Susan Tynan of DTC framing company Framebridge.

Read on to see who topped the list in your state (and click on the graphic to enlarge it). 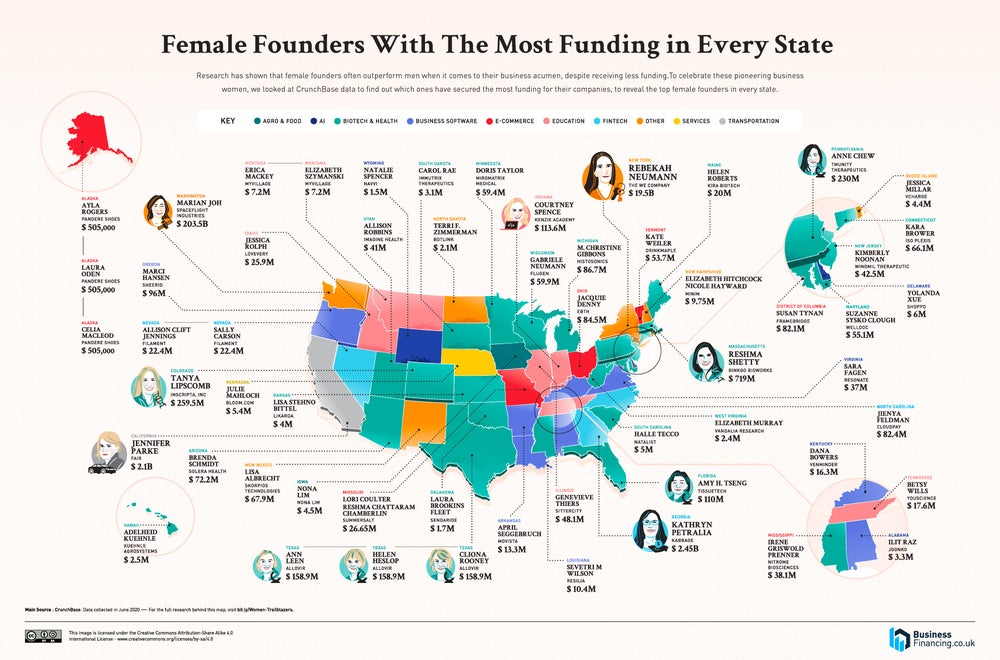 What is 'KN Car?' 30,000-Plus People Are Reportedly Googling the Question Every Month After the Kia Logo Redesign Last Year