By Taylor Hatmaker June 7, 2013
Opinions expressed by Entrepreneur contributors are their own.

This is the final piece in a four-part series as I test Google Glass for personal and business uses.

After wearing Google Glass for more than a month, I can say with certainty that it's a game-changing device. For such an early iteration the device works well and more interesting software -- called "Glassware" -- is being developed every day. I can see Glass catching on with the masses, once we're a little more accustomed to Google's vision for augmented reality.

From business to personal use, Google Glass is an extremely compelling device for just about anyone. Here's why:

It's an everyday device. So far, the most striking thing about Google Glass is how it's more convenient to wear than to not. I expected to use it only as a novelty device, deliberately for the purpose of writing about it. But now, if I sit down at my desk, I reach for Glass. If I'm going out, I'll put it on before I walk out the door. It makes my daily interactions, checking email, sending and receiving texts just that much easier. Most of the time I forget it's on at all. 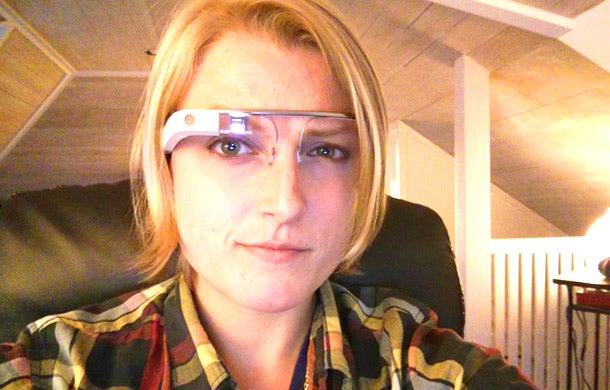 Author Taylor Hatmaker thinks
Google Glass will be the next big thing.

The casual convenience that Glass provides is what makes me certain it could catch on as a mainstream device for the average consumer. The best technological innovations succeed in making our lives easier and less messy. Even in this beta iteration, Glass is that kind of device.

Price will make or break Glass. Last year, rumors emerged that Glass would be commercially available by the end of 2013 for "around the price of current smartphones." As it stands, Google is doling out the device slowly to winners of the "Explorers" contest for $1,500.

But is Glass worth $1,500? No, it isn't. Its components should cost considerably less once manufactured on a larger scale, likely driving the price down significantly. And Google isn't in the business of high markup on its top devices.

Considering that Glass is a risky experiment in the nascent field of wearable tech, it's in Google's best interest to get Glass into the hands of as many consumers as possible as fast as possible. It may read like a luxury product now with its astronomical early pricing, but Glass is meant for the everyman.

How much will the everyman pay? A recent survey found that 48 percent of nearly 3,500 respondents would happily pay between $200 and $300 for the device. But for now, Glass isn't a standalone device. It needs to be paired with a smartphone or connected to Wi-Fi to be truly useful. As long as that remains true, Glass will be a luxury device on par with buying an iPad to have a second screen around.

Glass raises privacy concerns. Literally everyone I've encountered while wearing Glass has reacted enthusiastically. But they've also expressed concerns about privacy. Most people seem squeamish about how Glass wearers can inconspicuously record video and take photos of people they see.

Some of the fears are allayed after I explain how Glass works and liken it to a "smartphone on your face." The privacy concerns raised by Glass are really not all that different than those raised by the prevalence of smartphones. They just feel new.

Glass: a social revolution. Unlike wearable tech standouts like the Nike+ Fuelband or the Pebble smart watch, Google's device drapes a layer of virtual information over visual reality itself. Because of its uniquely immersive nature, I think Glass is capable of revolutionizing or altogether disrupting the way that we interact socially.

But from the start, Google's aim was to make our devices less interruptive in social contexts, and to that end I think Glass succeeds. Checking a notification is wholly optional after you are notified by an audible "ding" in your ear. Doing so takes a fraction of the time it would take to pull out a smartphone, unlock it and peer into the screen.

Before the advent of the smartphone, we never could have imagined spending so much time on tiny screens we carry around in our pockets. And once society gets over its technological heebie-jeebies, Glass -- and devices like it, yet to come -- are the next frontier.

Taylor Hatmaker is a technology writer based in Portland, Ore.

Get Up to Speed on Cisco Networking and IT Skills

Cat And Mouse – As Scammers Step Up Their Game, Crypto Security Must Keep Pace