A decade ago, Ryan Grepper decided he wanted to be able to make frozen mixed drinks while picnicking with his friends and family. So, he attached a blender to a weed whacking engine.

The picnic-ready frozen drink machine was a hit at outdoor parties -- and it inspired a product that, as of today, has raised more money on crowdfunding site Kickstarter than any other product ever. That single act of problem-solving ingenuity launched a million-dollar idea, times ten.

Building on his initial contraption, Grepper eventually designed a cooler with a blender built in. The Portland, Ore.-based serial inventor also added a smattering of snazzy features including speakers, a phone charger and rugged wheels. He dubbed his pimped-out cooler “The Coolest.” 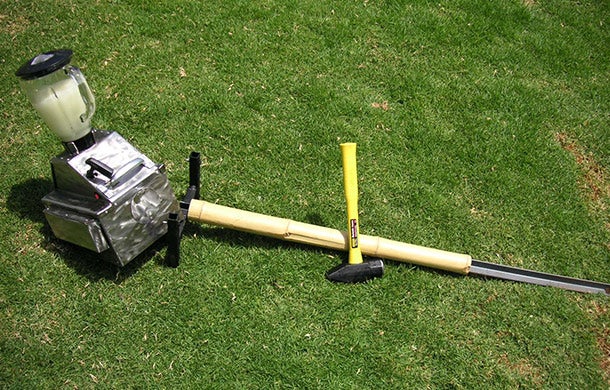 The idea for The Coolest stemmed from Grepper's first invention: a blender/weed whacker contraption that could be used to make mixed drinks outside.
Image credit: The Coolest

Last month, he launched a crowdfunding campaign, seeking to raise $50,000 for large-scale production. The campaign -- which closes Friday -- has since raised more than $10.3 million, breaking the previous record set by the Pebble smartwatch in May 2012.

Perhaps the most remarkable component of Grepper’s story, though, is not that his MacGyvered cooler raised mega money, but that six months earlier, The Coolest was a dud. That’s right -- in its first Kickstarter campaign, launched last November, The Coolest failed to make its $125,000 goal.

At a glance, the two campaigns don’t look all that different. So, what gives? How did Grepper’s crowdfunding campaign fail the first time and, a few short months later, rock to the top of the most funded list?

Entrepreneur.com tracked down Grepper to get his best advice on running a blockbuster, come-from-behind Kickstarter campaign. Here are his secrets.

1. Have a fully equipped prototype available to show in photos and videos. Grepper had built a version of The Coolest when he launched on Kickstarter that first time, but he wasn’t able to fashion all of the features promised. For example, having a USB charger in The Coolest was a “stretch goal” that would be included if the campaign hit a threshold, but it was not embedded in the prototype featured. Also, the wide-wheels and space divider were not built into the first prototype. By the time he launched his second campaign, he had a fully retrofitted prototype. “It is such a visual medium that I think that is one of those minimum steps I would suggest people make is bring their design to a state where people can see what the product is going to be rather than imagine how great this will be.”

Related: Leverage Video to Cut Through the Crowdfunding Clutter

2. Make sure your video is short and customer-focused. Grepper watched scores of videos on crowdfunding campaign pages for products in a similar product category to The Coolest and analyzed what he liked, didn’t like and what was successful in getting him interested in the product and what was offputting. First and foremost, you need to keep your video short. You don’t have much time: 2-1/2 to 3-1/2 minutes tops, estimates Grebber.

Also, successful videos aren’t narcissistic: They focus on the customer. “So many people focus on the features [of their product] and they focus on how they came up with this idea, and really it needs to be primarily about the benefits of your potential backer. How is this going to improve their life, their situation, their day to day experience?” said Grepper, who hired a 17-year-old for the production of his video.

3. Think about your product’s timing. Launching a crowdfunding campaign for a cooler in December was a bit of an error in judgement, said Grepper. He had thought that launching in the holiday shopping spree might be a boon for his campaign, but “the obvious hindsight observation is that one of the coldest months of the year is not the time to trying to get people excited about coolers,” said Grepper. “And so relaunching here in the summer was a big help.”

Grepper’s Kickstarter failure the first time worked to his benefit, as he was able to launch his second campaign with support from his initial group of backers. “When we launched [the second time], we had this larger group who would be with us on day one to help make a big splash. And just like throwing rocks in a pond. If you throw pebbles, the ripples you get from a pebble are significantly different from throwing a big rock in. And the big splash helps us attain that multiplier effect and that is what really helped our project get the momentum it did early on.”

Related Book: Cash From The Crowd

5. Go all out on the social-media channel where you’re getting the most traction. Reach out to potential campaign backers on Facebook, Twitter and email with updates. Grepper blanketed the social-media spectrum, but had the most success on Facebook and decided to focus more of his energy there.

6. Successful crowdfunding requires marketing. You can’t expect everyone to love your idea the way you do -- you have to sell it to them. “That first Kickstarter campaign, I made what I would call, one of the most rookie mistakes of crowdfunding, which is thinking that when you launch with a good idea, that’s all that’s required,” said Grepper. Raising money from the crowd requires preparation, elbow grease, and honest analysis of your idea. “That’s the biggest mistake most inventors make -- is they look at an idea from a passion perspective rather than analyzing it as a business opportunity.”

7. A crowdfunding failure doesn’t mean “game over.” “I think the biggest lesson from that first campaign was recognizing that failure isn’t permanent,” said Grepper. “It is an opportunity to either give up and move on to the next project, if that’s what the data and what the feedback shows, or it is a chance to recognize and learn from those mistakes, dive deeper into best practices and launch again.” In addition to his own continued commitment to the idea of The Coolest, Grepper said that he was buoyed by the enthusiasm of his earliest backers.