Social media companies have been facing trouble with the Indian government over privacy, data usage and spread of misinformation

By Shreya Ganguly October 7, 2019
Opinions expressed by Entrepreneur contributors are their own.
You're reading Entrepreneur India, an international franchise of Entrepreneur Media.

According to media reports, India is expected to reach 627 million social media users by 2019. A report by Internet and Mobile Association of India (IAMAI) reportedly showed that India had 451 million monthly active users as of March 31, 2019.

The deeper internet penetration in India has led to a visible increase in the use of social media in India. According to a report by social media management platform Hootsuite, YouTube is the most popular social media platform in India followed by Facebook, WhatsApp, and Instagram 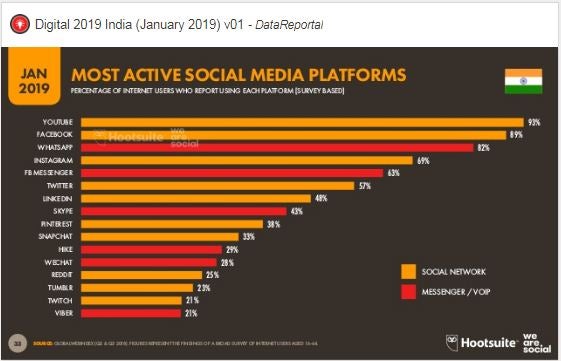 While the social media platforms are widely popular with the users, the tech giants have been facing trouble with the Indian government over privacy, data usage and spread of misinformation. Here are some of the companies facing issues with Indian authorities:

WhatsApp: The Facebook-owned messaging app has been facing troubles in the country majorly on two fronts- the launch of WhatsApp Pay and the spread of false news. In 2018, misinformation and rumours around child kidnappings via WhatsApp had led to several lynchings across India. Following this, the Indian government has been asking WhatsApp to trace where the messages are being originated. The company also had plans to launch its payment services in the country, however, the plans have been delayed over data localisation issues. According to the data localisation rules, online payment companies are required to store data of Indian users locally. According to media reports, the Supreme Court directed the Reserve Bank of India to examine and report whether WhatsApp Payments has fulfilled its data localisation requirements yet .

Facebook: Mark Zuckerberg's Facebook has been receiving criticisms across the globe after the infamous Facebook-Cambridge Analytica scandal which compromised data of nearly 87 mn users across the globe. In July this year, the Federal Trade Commission (FTC) had fined Facebook $5 bn over privacy breaches. Lack of clear data policies and security of privacy has rocked Facebook's reputation beyond repair. Last month in an interview with Willamette Week, US Senator Ron Wyden had said that founder Zuckerberg should face imprisonment for lying to American citizens about Facebook's privacy lapse.

Telegram: Now messaging platform Telegram has also come under the radar of Indian authorities as last week, Kerala High Court sought the central government's view on a plea seeking to ban Telegram. According to media reports, Athena Solomon K — a student of the National Law School of India University in Bengaluru had approached the court stating that the app was being used for sharing obscene content of women and children.