Understanding the Science and Psychology of Open Salaries

It's taboo to share your salary with everyone, but being transparent about payment is very beneficial for businesses. Find out why.

How many people know your salary?

Your boss, of course. Your partner, perhaps. Maybe a few friends you can trust.

What if everyone knew it? And not just everyone at your company; everyone like everyone—Internet commenters. Friends of friends. People you've never met.

This is the experience of every team member at Buffer, where we've been sharing our salaries with the world since 2013.

And we're not alone in breaking the salary taboo:

It's still tough to find more than a handful of companies choosing this path, but interest in transparent salaries has skyrocketed over the past few years:

We've talked about why transparency was right for us at Buffer, but some bigger questions remain: What's fueling this desire for pay transparency? And could it be right for your organization? I'd love to share some of the science and psychology behind the transparent pay revolution.

The counterintuitive secret of pay transparency

Here's the biggest, most counterintuitive secret of talking about pay: Although one theory of pay secrecy is that it helps "keep the peace," the data says it's doing just the opposite.

A survey of 71,000 employees byPayScale found that the main predictor of employees' satisfaction is whether they feel they are paid fairly.

Even underpaid workers' job satisfaction more than doubled—rocketing from40 percent to 82 percent—when they knew why they were paid what they were and felt free to talk about compensation openly. 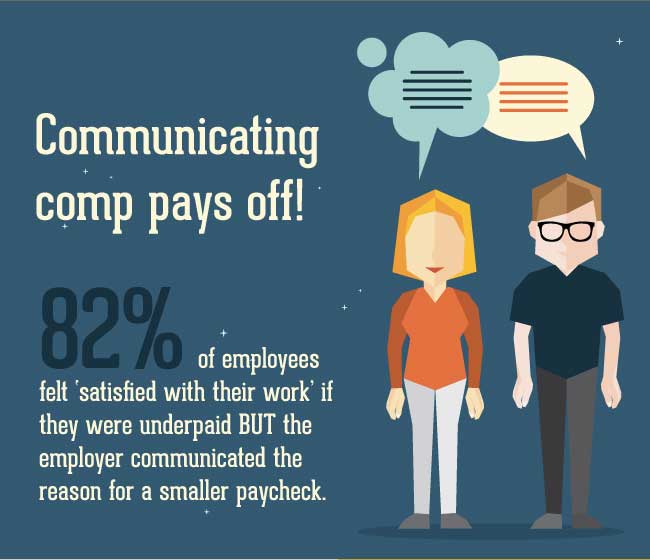 In other words, how we perceive what we're paid matters more than what we're actually paid.

And the more information we have about why we earn what we do—especially in relation to our coworkers–the happier we are.

While employers might fear that sharing compensation figures could lead to jealousy between employees, researchers found that clear communication about compensation is one of the top predictors of employee satisfaction—more important than things like career advancement opportunities and employer appreciation.

The psychology of perception gap: We misjudge when we don't have salary information

A pretty simple psychological underpinning is at work here: Our brains love tofill in the blanks when they encounter a perception gap—often lazily, with bad intel).

So keeping pay secret doesn't stop employees from guessing what their bosses and coworkers make.

And when we fill in the blanks of withheld information, we're very often wrong. The same Payscale study found that two-thirds of people who are likely being compensated fairly believe they are underpaid. 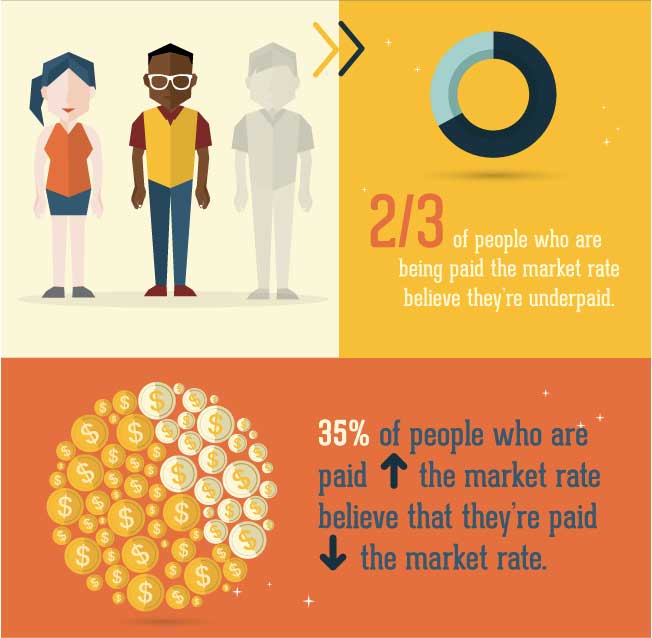 Which brings us to another element of transparency: How it affects on-the-job performance.

Of those above who believed they were underpaid (even if they weren't!) 60% said they were unhappy at work and planned to look for a new job soon.

How many of those folks might had stayed, with a much brighter outlook on their job, with the help of an open discussion about salary?

A variety of studies have shown that pay transparency can create a more healthy, productive work environment in a number of ways. Happiness, of course, is a big one: 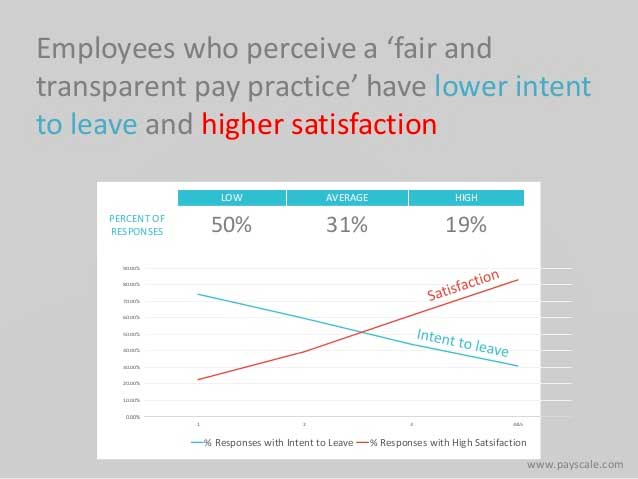 A study of 280 Israeli undergraduates found that pay secrecy hurt individuals' performance and weakened the perception that better work would be rewarded with a raise.

Conversely, a 2011 study at the London School of Economics followed companies that switched from pay secrecy to open compensation and feedback and noted that more information about pay led to "a large and long-lasting increase in productivity that is costless to the firm." 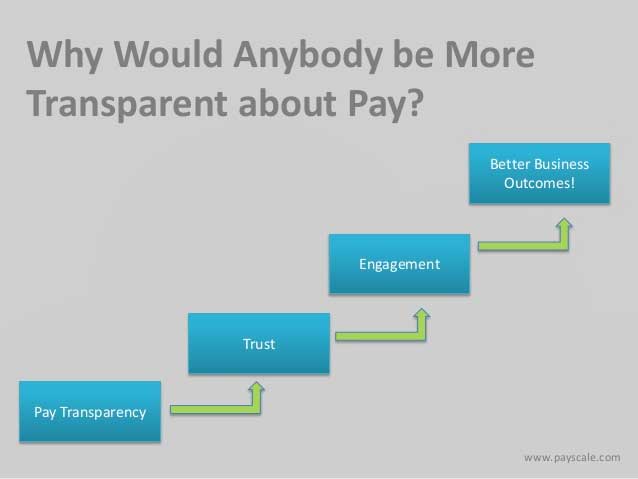 There's another growing factor at play in the rise of transparent salaries: equality.

Tech companies like Pinterest, GoDaddy and Salesforce have all recently reviewed or announced plans to review overall employee compensation data to root out gender wage gaps or other challenges to equal pay for equal work.

How can we make sure underrepresented groups are paid equally for equal work from the start? Transparency provides the clearest-cut solution we've discovered, in that it creates a culture of conversation where teammates feel empowered to share information and ask questions.

In 2015, the #talkpay movement, started by the programmer Lauren Voswinkel on the diversity-in-tech focused site Model View Culture, provided a boost here.

Voswinkel urged Twitter users to open up and share their salaries with the world. The hashtag would go on to get nearly 12,000 mentions,according to Fortune; and about 1,300 people published their salaries, Buzzfeed determined.

Voswinkel told The Guardian, "This type of discrepancy is only allowed to exist in an environment where people are afraid to talk about this pay, and that's the thing that I want to abolish."

Most recently, President Obama proposed a new rule that would require companies with more than 100 employees to report salary data by race, gender and ethnicity.

The other side of transparency: Cultural norms and tough conversations

So if pay transparency has all these benefits, why isn't everyone doing it?

One big reason is that there's a cultural stigma in many places in the world attached to talking about money openly.

In a fascinating blog post, Transferwise asked 50 people around the world if they'd ever be willing to share their salary openly and got a crash course in how different cultures view compensation.

Here's a cool word cloud of some of the terms that came up in their conversations: 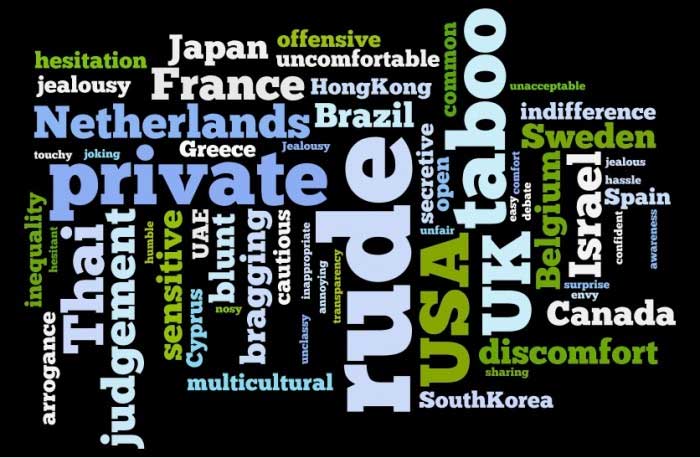 In some regions there are rules and laws against talking about pay—and in many more, there's a myth that these rules exist even when they don't.

Even in the United States, where it is illegal to bar employees from sharing salary information, a 2010 survey found that nearly half of all U.S. workers reported being either contractually forbidden or "strongly discouraged" from discussing pay with their colleagues.

Beyond cultural norms, it's also not the right personal solution for everyone—particular those concerned with privacy in an increasingly surveilled society.

The future of transparency

With the wealth of company and job information now online, interest in transparency is likely to increase along with the prevalence of sites like:

For employers, this growing phenomenon could possibly lead to tricky conversations—and could potentially throw older, more traditional organizations into a bit of upheaval.

If you're interested in affecting change at your company, it's helpful to know that it doesn't have to be all-or-nothing. 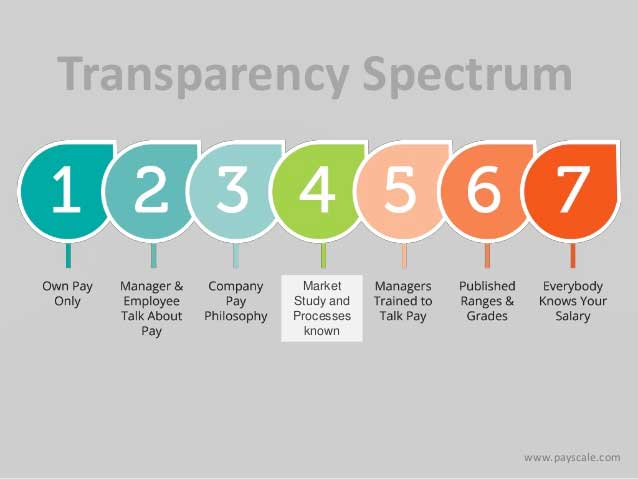 At Buffer, we've been so honored that other companies have chosen to adapt or modify our open salary formula for their needs, and anyone is welcome to build on and make it better for their team.

In addition, we've also launched a salary calculator, to make it easier to understand how our formula is calculated based on all its factors. 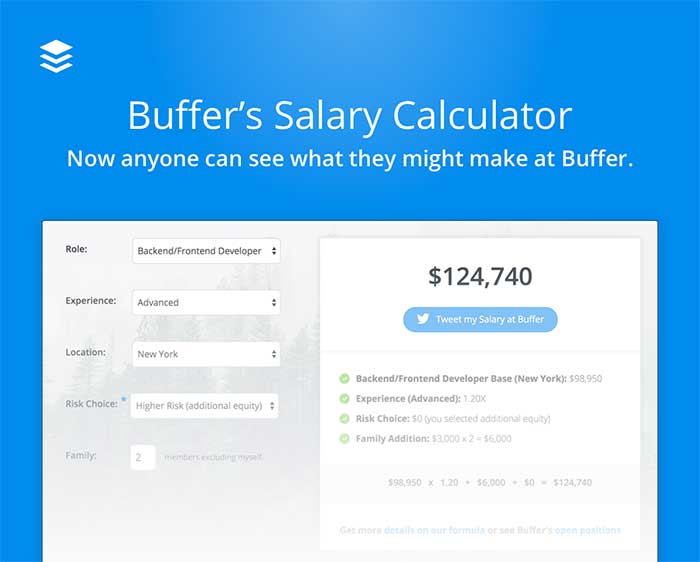 For anyone looking to take a job at a startup, working on salaries at a startup, or just curious about salary transparency, we hope our formula and calculator might cut down the time you spend on thinking about salaries by many hours.