Business As A Catalyst For Change: Sir Bob Geldof, KBE

The Irish musical legend used rock and roll as a platform to do good, and he believes entrepreneurs can (and should) do the same with their businesses.

"We now know that economic progress without social progress is a mean, dispiriting, self-defeating thing, so how do you make that work? How do you give relevance beyond simply giving somebody a paycheck?" That's the question Irish singer, songwriter, and author, Sir Robert Bob Geldof, Honorary Knight Commander of the Most Excellent Order of the British Empire (KBE), raises when I talk with him just a couple of minutes after his keynote speech at the UNMASK UAE, an event organized by the UAE Chapter of Entrepreneurs' Organization, held in Dubai in November. "If you can make it work, if you give people added benefit to the work that they are doing, or that they insist on added benefit like most kids do now, then, without question, you will expand the ability of the company to operate and to make profit too," Geldof adds. "It is about having a business for something other than profit, as well as profit."

The essence of Geldof's message was simple: every endeavor, be it playing rock and roll or building a business, should be used as a catalyst for change. "Rock and roll is finished now, but it was the central spine of that culture, and the lesson I learned from early rock and roll, Bob Dylan, and others, was to use it is as a platform [for doing good]," he says. "Also, with business, you can use it for other things besides making money. You can use it to improve people's lives, which is what everyone is talking about now. That it cannot be just about shareholders, but stakeholders as well. Businesses don't work unless they are embedded into the community." 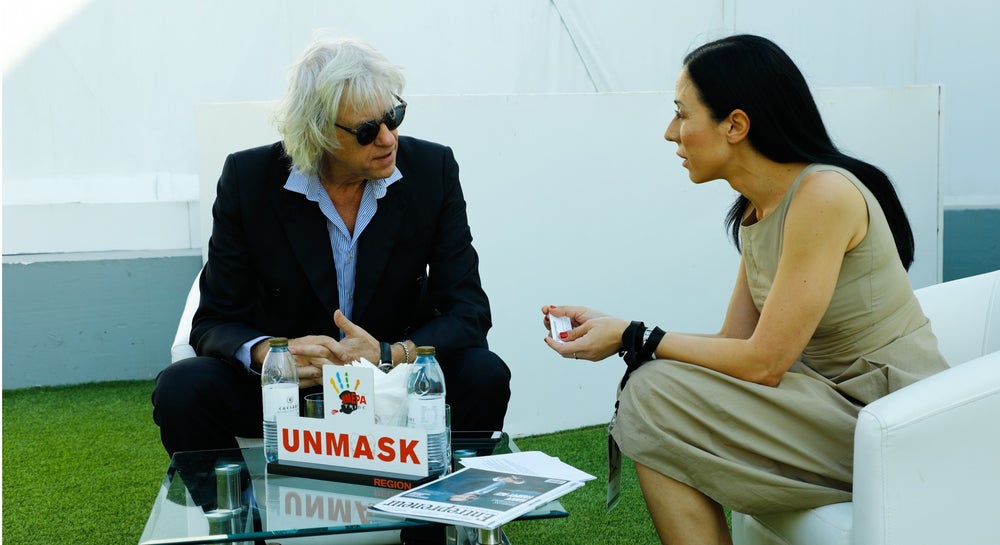 Ever since rising to fame with the Irish rock band the Boomtown Rats in the late 1970s, Geldof has used his popularity for social activism, particularly anti-poverty efforts concerning Africa. In early 1980s, he organized Live Aid, a charity concert staged simultaneously in London and Philadelphia, to raise money for famine relief in Ethiopia. Two decades later, in 2005, it was eight simultaneous concerts around the world -Live 8- to put pressure on the G-8 economies to step up their commitment to Africa. In 2008, Geldof co-founded 8 Miles, a private equity firm focused on supporting African businesses. Today, Geldof also serves as an adviser to fellow Irish rockstar Bono's ONE Campaign, among other initiatives.

Forming a rock and roll band, Geldof says, was an entrepreneurial activity in itself, and as our conversation will show, it was just one of the demonstrations of a mind prone to actively seeking out change. "Because of rock and roll, I understood television, and I started a television company with two friends, which was very successful." This was in the 90s, when Geldof co-founded Planet 24, a TV production company that featured the successful early morning show called The Big Breakfast. Next was Ten Alps, which Geldof co-founded in 1999, and that's the company that created the successful reality TV show, Survivor. Geldof adds, "All the time, in parallel to all of this, I've been doing music, because I cannot stop that, which is what I like doing; actually, it's the only thing I like doing. It's just that I can do this other stuff as well. So, one thing led me to another, but I think that in my case it was the circumstances when I was very young that led me that I had to invent myself all the time." 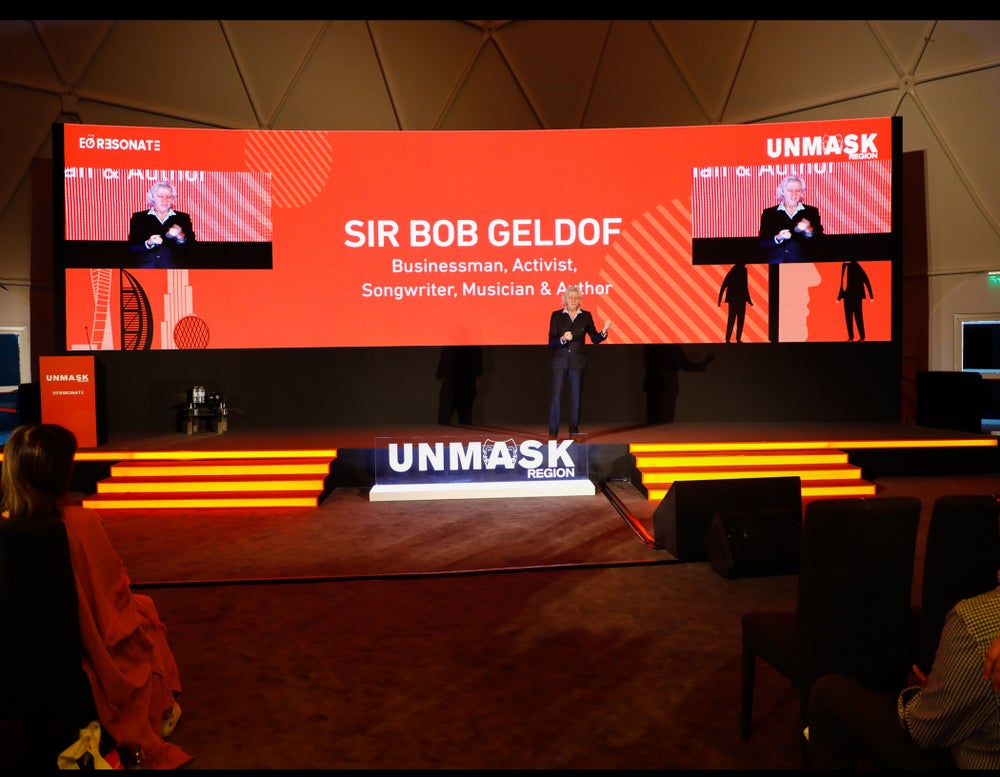 Geldof has spoken about his lonely childhood in Dublin on numerous occasions. Having lost his mother when he was seven years old, he also had to cope with his father being physically absent from home, due to his work as a traveling salesman. Ever since those years, Geldof says, he has been determined not to allow his life to be limited by adverse circumstances. "My life just could not be that, and I had to invent a way to be Bob," he says. "That -inventing a way- is the essence of entrepreneurship. It is inventing a way for the self to manifest itself economically. I had to invent a viable life. So, you gather experience when you are younger, and then you try to put that into practice."

Geldof's entrepreneurial path having already led us to him becoming a rock star, as well as to him using his influence for a greater good, we now talk about the moment Geldof himself became aware of his enterprising mindset. It was in his early twenties, he says, when he worked as a music journalist in Vancouver, Canada. "Even trying to find a job, there was an entrepreneurial lesson in itself," he says. "You are completely by yourself. You have to learn to sell yourself, to sell your idea of yourself, so that people would employ you. It was in Canada really when my first opportunity to be something came, and I lied my way into that job. I said that I was a writer, and I wasn't a writer, but I said, "Look, you send me out, and if you don't like it, don't publish it.'"

Here, Geldof tells a story about his time at The Georgia Straight, a free Canadian weekly news and entertainment newspaper. "For three months, I had been the music editor, which was 50% of the content of the paper, but I thought that not enough people were reading my pearls of wisdom. We were selling the paper on the street, it was okay, but we could not get advertising, because we didn't have a big enough circulation. And if we could not get advertising, we could not get the things that I wanted to do. I was annoyed by the business model, so I became the circulation manager. I persuaded the owner to do a free version of the paper, without a color cover, just black and white, which we delivered free to three universities in Vancouver. I went out, and I drove around in a Volkswagen with my friend, persuading news agents to take the paper, universities to allow delivering it, while writing and being the music editor as well. Overnight, our circulation was quadrupled. And because we now had a serious circulation, albeit one that was free in the universities, and one that was paid for in the street, we could get serious advertising and serious money. That's when I discovered that I could do this."

Before committing our conversation to a full stop, I find it tempting to ask about his thoughts on the power of today's media, especially social media, to inspire positive change. As I expected, Geldof replies that "the distribution of the media has meant the dilution of the message." He explains, "The global conversation is bubbled now, it really is, but there will be moments, just like online phenomena (the #MeToo movement, for instance) that we have already seen, but each one is just a moment, just a blink, because there is another one coming. Also, social campaigns on digital media don't really have the impact, they come, they go, and what we need is concentration. Pop music is simply pop music, that's all it is now, it's very much like the 1950s. I could be completely wrong, but I don't think there is an art form around which everyone can agree. In my time, lingua franca of the planet was not Chinese, English, or Spanish, but pop music. That's why it worked. I don't know what the common language of the world is now. It seems to be anger, and that's only leading one way." 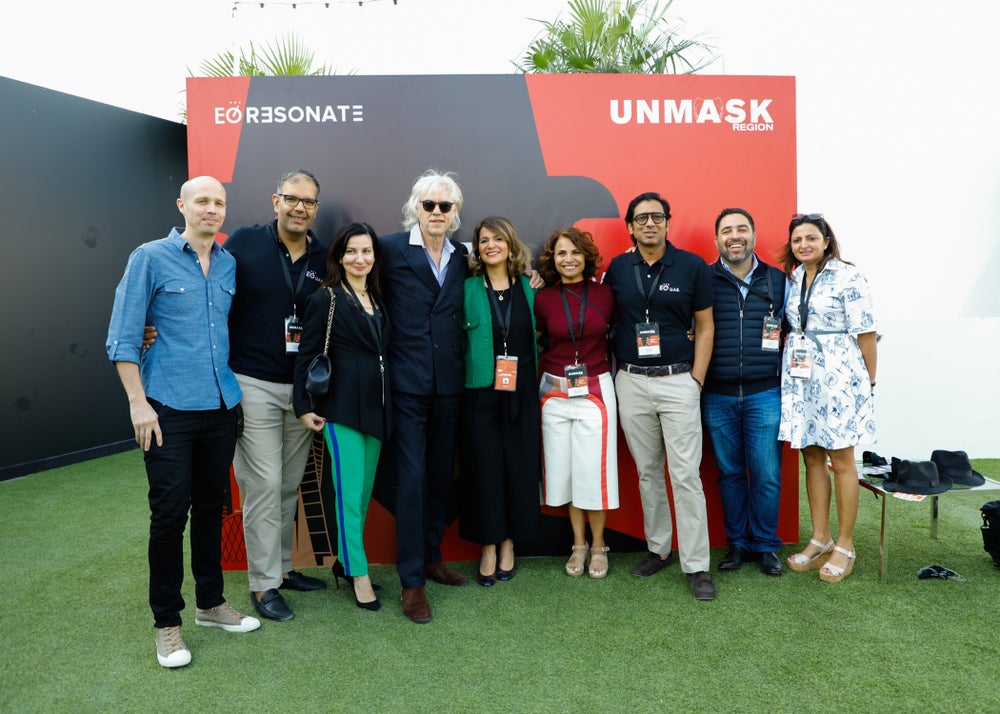 Sir Bob Geldof with the members of the UAE Chapter of Entrepreneurs' Organization.
Source: EO UAE

It is clear that Geldof has as much zeal as when, in 1985, his Live Aid concert was watched by 1.9 billion people across 150 nations. He still believes that empathy is the distinguishing feature of being human, he says. "People do care, but it is now about how to organize it in a structure where that care is effective," he adds. "It is not through preposterous childish politics of the moment. That's just not viable. We need this moment of populism, hopefully without conflict, but populism always leads to that. But again, populism is the function of the chaos of change. We really do need to alter things rapidly and now."

By this final minute of our conversation, I know that Geldof is not the type who, if I ask about how we can make our empathy effective, how we can make that change happen, will leave me without an answer. In doing so, Sir Bob Geldof shares a piece of advice for entrepreneurs as well. "I find business just as creative as recording," he says. "Where I am at my most "Bob' is standing on the stage, and playing music. That's when you are free, that's the catharsis, that's when you don't have to think, but you just get it all out of your system. But, when writing songs, you need to stay entirely focused on how that works, and business is no different. To cooperate with a great guitar player, or a piano player, or anybody whose skills you don't have, is so liberating. So, both music and business are each entirely cooperative efforts, and that's what we are missing at the moment– co-operation."