Driving random traffic to your site is mostly a waste of time. Developing an engaged customer base is the goal.

By Jacob Baadsgaard
January 16, 2017
Opinions expressed by Entrepreneur contributors are their own.

Sometimes in marketing, the word "traffic" has a bit of a bad rap, calling to mind images of rush-hour motorists passing billboard after billboard. With roadside billboards, the equation is fairly simple. The more traffic there is on the road, the more billboard impressions you'll get. And hopefully, those extra impressions will eventually translate into brand recognition and sales.

But online marketing doesn't quite work like that. In online marketing, traffic isn't the number of people who see your ads, it's the number of people who visit your site. People simply don't buy something online because they saw a banner ad over and over. Attempts to increase sales by simply getting more impressions aren't usually cost-effective.

If you want to succeed at online marketing, you need to prove that your business has what your potential customers need. For this reason, online marketers have started to put less emphasis on getting more traffic and more attention on making a better pitch to the traffic you already have. There are a lot of ways to do this, but the most scientific methods involve systematic A/B tests to build better ads, landing pages and websites. After all, if you can build the perfect user experience, everyone will buy, right? Wrong.

Related: If You've Got 100 Visitors Per Day to Your Website and You're Not Making Six Figures, Something Is Horribly Wrong

With that in mind, here are six reasons you should focus on the quality of your traffic before you even think about changing your website.

1. You're probably attracting the wrong traffic.

I compare online marketing to fishing. Online searchers are the hungry fish, your ads are the lures, and every click is a nibble. But different fish go for different types of lures. Bass go for one lure; trout for another. When I'm fishing for bass, I don't put a trout lure on the line.

In the same way, it's important to create ads that appeal to your ideal audience. For example, if you're running an AdWords campaign, you could bid on the keywords "sparkle princess kitten" and get a lot of clicks, but unless you're selling glittery toy cats, none of your clicks would be potential customers for your business. And to make matters worse, you'd have to pay for all those worthless clicks.

This example sounds absurd, but you'd be surprised by how many paid search accounts struggle with this problem. After auditing more than 2,000 Google AdWords accounts, we've discovered that for the average account, 100 percent of conversions and sales can be tracked back to a mere 6 percent of keywords. The rest of the keywords, no matter how brilliant they may have seemed at first, are about as worthwhile as "sparkle princess kitten." These keywords don't go unclicked either. The conversion-less keywords in an account typically produce 72 percent of its clicks and eat up 76 percent of ad spend.

2. The right traffic saves you money.

If you eliminate the campaigns that are driving the wrong traffic to your site, you can save yourself a lot of money. Cutting the fat from your account might seem drastic and a little scary, but remember, you're not getting rid of any of the traffic that makes you money. You're getting rid of the clicks that cost you money.

Consider the average ecommerce business. In paid search, the average ecommerce cost-per-click (CPC) is 88 cents and has a conversion (sale) rate of 1.84 percent. The average worth of these sales ranges from $81 to $119, but we'll go with $100 for easy calculation. So, if a business's PPC marketing garners 5,000 clicks, they'll get 92 sales, or $9,200. But they'll also have to spend $4,400 getting the clicks, most of which never had a prayer of converting. 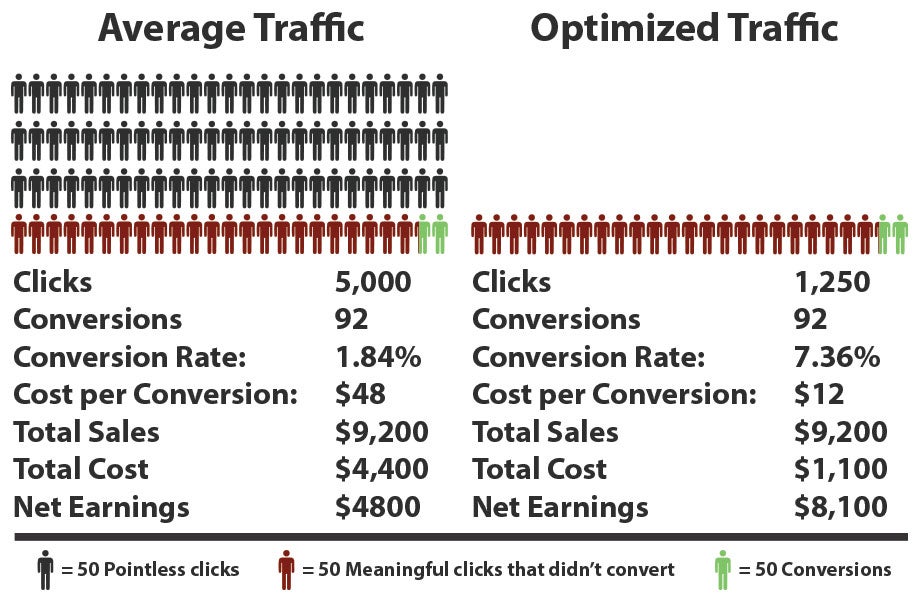 This doesn't look too shabby, but remember, the average paid search account wastes 76 percent of its budget on irrelevant clicks. What would happen if we got rid of that useless 76 percent of traffic? The company would still make $9,200, but now it only has to spend $1,100 to get it. Suddenly they're walking away with $8,100 instead of $4,800. The company's conversion rate also skyrockets to 7.36 percent, putting their account in the top 10 percent of ecommerce businesses.

When people hear "conversion rate optimization" (CRO) they usually think of site modification strategies like A/B testing, not traffic. I don't know about you, but when I see a conversion rate go from average to the top 10 percent in one fell swoop, that seems pretty optimized.

3. Fixing traffic first gives you a leg up on the market.

Don't get me wrong, I'm not saying that you shouldn't do A/B testing. It's a great way to improve your marketing efficiency and grow your business. I'm just saying you should fix your traffic first.

If two companies start improving their sites with A/B testing at the same time, but one has already optimized its traffic, then -- even if both sites produce the same number of sales -- the one with better traffic will always have a higher profit margin.

What's more, this extra profit can be reinvested into outbidding competitors on truly relevant keywords so that your company gets more of the right traffic, and your rivals get less.

If you don't currently have analytics in place to find the rotten keywords in your account, you might wonder whether waiting a couple of months to gather conversion data is worth it. After all, if you started A/B testing first, you'd get immediate results, right? Probably not.

There are plenty of testing sites out there that will promise to double, triple or even quadruple your conversion rate in 30 days or less. I won't say that this is impossible. If you've got a really crummy website then the changes you need might be so obvious that a good marketer could figure them out in a matter of weeks. But for most of us, improving our marketing soup is less about removing a cup of salt from the recipe and more like constant experimentation to find that secret ingredient. As a result, the gains from most of your A/B tests will be modest and take time to recognize. In fact, if you see enormous improvement early on in a test, you may want to be a little skeptical. Here's why:

Imagine that you create a new landing page and start an A/B test on it. One day into the test the new page gets a 10 percent conversion rate, while the original page gets only five percent. Obviously, the new page is twice as effective as the old one. Time to stop the test, send all your traffic to the new page and start making money, right? Not so fast.

Well, before you run off and do that, you might want to know that each version of the page only got 20 visitors. The old page got one conversion and the new page got two. A difference of one conversion could easily be a fluke. It's entirely possible that the next day the results will be exactly the opposite.

As time goes by, however, your test will accumulate more and more data, so that large changes in daily conversion rate will have less and less influence on your overall conversion rate (CR). 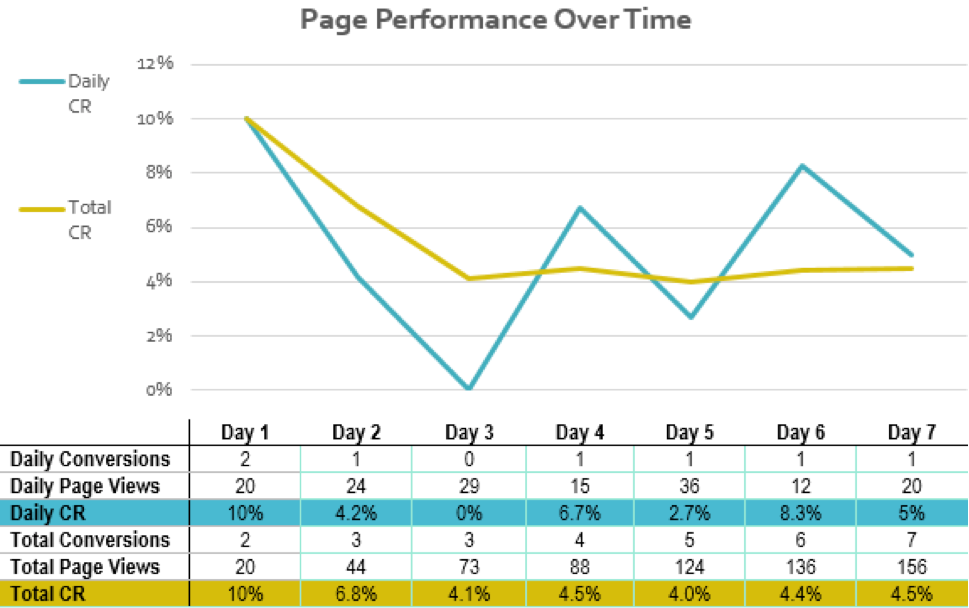 Only time will tell what the true effectiveness of a page is, but unfortunately, many A/B tests are terminated by excited businessmen long before time gets a chance to chime in. Even if test results are statistically significant, if they're gathered over a very short period they could still be lying to you.

The most reliable information comes from long tests with lots of data. You'll usually want to get at least 350-400 conversions per page variant before you consider calling the results of a test. Obviously, this can take a while. In fact, your tests should never be shorter than a week and may need to be much longer depending on the amount of traffic you get.

Another reason to be skeptical of initial testing gains is that customers may just be reacting to your site being different. You may have heard of the Hawthorne experiments of the 20s and 30s. The experimenters wanted to know whether lighting conditions affected factory worker productivity, so they improved lighting for half of the employees. Productivity went up.

Then, to be sure of their findings, the experimenters returned the lighting to normal. Productivity went up again.

Online customers can act a lot like this. They may respond positively to a new page design, not because they like it, but just because it's different. For example, in 2011, the outdoor outfitting company Patagonia leveraged this principle and saw a 30 percent increase in revenue following a "Don't buy this Jacket"-themed advertising campaign.

But as useful as novelty can be, it is obviously fleeting. You won't want to make permanent changes to your website or landing pages on the basis of short-term hype. To really tell whether customers are reacting to the fact that you made a change or to the change itself, you need time.

5. Testing works best when you test the right traffic.

Not only do traffic changes generally produce faster results than testing, they actually improve the testing process itself.

You may have heard before that experiments should be done on a "representative sample." That means your test subjects should look like the people you want to apply your results to. In other words, if you want to know which Yankees jersey people will buy, you don't ask a bunch of Red Sox fans.

It's so simple that it seems to go without saying, but if you start A/B testing when 75 percent of your traffic isn't interested, then you're basically making the same mistake. A sample of true potential customers will give your test much more reliable data than a sample of "sparkle princess kitten" fans.

To put it simply, good traffic makes it easier to spot the effects of your testing. In my previous ecommerce example, a conversion rate change from 1.84 percent to 2.58 percent might seem small enough that it could be overlooked, even though it represents a 40 percent increase.

If traffic was optimized first, however, the same improvement would increase the effective conversion rate from 7.4 percent to 10.3 percent, which is much easier deem as important. In essence, a focused traffic sample acts like a magnifying glass, putting the true effects of your testing into perspective.

The last reasons to change your traffic first depend on your market. Some industries have much higher cost-per-click than others. For example, while ecommerce clicks run around 88 cents, clicks in the legal sector average $5.88 each.

The higher your CPC, the more you stand to gain from eliminating useless clicks. On the flip side of this equation, the lower your sale value is, the more important it is to cut down on overhead and -- you guessed it -- get rid of irrelevant clicks.

In general, if your business needs a lot of traffic and conversions to survive, or if your marketing contribution margin is low, then you have a lot to gain from ensuring that your online marketing is producing the highest quality clicks possible.

There's a lot more to internet traffic than just trying to get more people to drive by an online billboard. As a result, optimizing your online marketing isn't just about tweaking pages on your site, you need to pay attention to your traffic quality, too.

Fortunately, optimized traffic doesn't just save you money, it also builds a strong foundation for years of successful site testing. So, if you really want to optimize your conversion rate, why not start by making sure you have the right traffic on your site?