By Jason Fell
March 30, 2012
Opinions expressed by Entrepreneur contributors are their own. 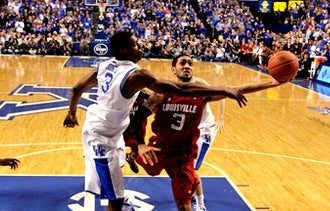 For the first time, two Kentucky college basketball teams -- the University of Kentucky's Wildcats and the University of Louisville's Cardinals -- will play each other in an epic men's NCAA Final Four showdown on Saturday. The heated rivalry between Kentucky's big schools is expected to equal big business for many of the state's small companies this weekend.

"This is Kentucky's version of the Super Bowl," says Hank Phillips, deputy commissioner of the Kentucky Department of Travel and Tourism. "That translates into bars and restaurants being full on game day, and a generally festive mood that loosens up the purse strings for the purchase of food, liquor and team paraphernalia."

"Post-game, for winners and losers alike, Kentucky bourbon is likely to be in high demand," he adds.

No one knows this better than Tony Thomas, general manager of The Sports and Social Club, a popular sports bar and restaurant in Louisville that's not far from the KFC Yum! Center where the Cardinals play. So far, Thomas says, business from this year's March Madness tournament has been record breaking.

"I expect Saturday's game to increase the week's business by 50 percent," he says.

Related: The Risks of Betting on Sports in Your Office

Thomas, like other business owners and managers across the state, has been preparing his staff for the coming madness. Here, he shares three tips for dealing with a sudden increase in sales -- no matter what industry you're in:

1. Have more than enough staff.
Extra foot traffic means additional employees will be needed to handle the mob. This weekend, for example, bar owners might consider adding security in case patrons get a little rowdy.

"You can never have too many employees on hand," Thomas says. It's easier to send extra employees home when it slows down than to scramble to get people in after the rush has already hit, he says.

2. Stock up.
There's nothing worse than turning customers away because you've run out of something. If you can anticipate a busy day, make sure you have enough of your product available to get you through.

"Running out of items can leave a bad impression and turn a good visit bad," Thomas says.

Related: Seven Ways to Keep Angry Customers (Like Me) Happy

3. Take customer service up a notch.
Attention to customer service can be crucial when dealing with a flux of people with all types of requests. This weekend, Thomas is aiming to be as accommodating to Wildcats fans as he is to the local Cardinals fans. "You can gain a lot of business from fans of visiting teams and they can come back every time they are in town," he says.

How do you prepare your business for a sales surge? Let us know in the comments section below.