Amanda Klane and Drew Harrington took more than a year iterating on the delicious idea behind their company, Yasso.

Amanda Klane and Drew Harrington became friends in kindergarten. About two decades later, they would team up to create Yasso, a frozen Greek yogurt company that they project to be a $100 million-plus brand by next year.

But in 2009, the pair, both former athletes who eat lots of Greek yogurt for its high protein content, struggled to nail down the science behind their food-bending idea: creating a frozen Greek yogurt that not only tasted good, but had a good enough consistency to stay on a stick.

Related: How This 27-Year-Old Took Over a Dairy-Free Ice Cream Brand and Helped It Grow to $12 Million in Sales

"We had to go out and figure out how do you actually freeze Greek yogurt and make it taste like ice cream," Klane said. "If you stick a cup of Greek yogurt in the freezer, it becomes an ice cube. The texture will be hard as a rock. So there was a lot of things we had to do."

Although Harrington and Klane both had experience with business -- he co-founded a company that created an inflatable beer pong product called Poolside Pong, and she worked for her father's food brokerage firm -- one thing became clear right away: they were not food scientists and didn't have the skills required to realize their vision.

"In the early days we tried to make it on our own, and it tasted horrible," Harrington said. "We sampled friends and family, and they were polite enough to tell us how bad it tasted. We knew at that point we couldn't do this on our own."

So Klane and Harrington, both in their early 20s at the time, enrolled in a class on ice cream at Penn State, but to save money, only did so under Harrington's name.

"We figured with 'Drew,' we could both sneak into the conference with the same name tag," Harrington said. It worked. Still, Harrington and Klane, now 33 and 32 years old, came away with the impression that this challenge was still too great to tackle on their own, so they enlisted food scientists and graduate students at the University of Nebraska to figure it out. About 40 to 50 iterations later, each taking about a week to ship to Harrington and Klane's headquarters in Massachusetts for taste tests, Yasso in late 2010 finally had a product to go to market with. Retailers jumped at the chance to stock the product, Klane said (and her connections in the industry helped get into the door). 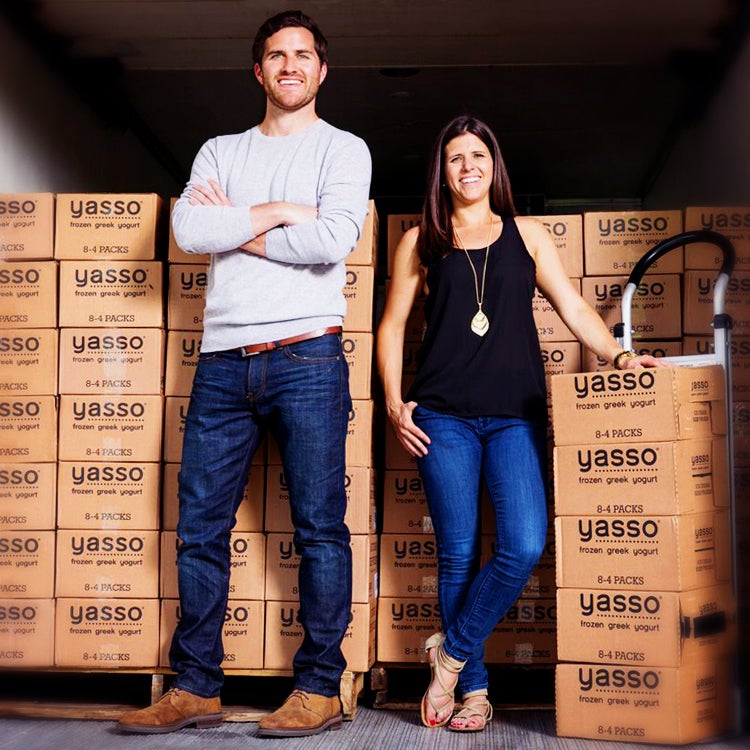 "We knew that we had a product that everybody was going to be looking for, because everybody loves ice cream and everybody wants to be able to eat it every day," she said. "We hit the market at the right time. People knew Greek yogurt. Health and wellness was on trend, and this fit perfectly into retailers' sets. It was something that no one else was offering."

Yasso can now be found in more than 17,000 stores across the U.S. The company was bootstrapped with funds from friends and family until 2013, when Yasso got a $4 million investment from Raptor Group. In 2017, Massachusetts based private equity firm Castanea Partners invested in the company. Yasso recently introduced Chocolate & Vanilla Swirl Bars, Fudge Brownie pints as well as its first seasonal flavors. A line for kids will launch in 2019.

So what do Harrington and Klane attribute their success to? For one, that the actual product was hard to develop, and Harrington said that they chose to first introduce novelties (that's ice cream on a stick) because it's a more challenging product as less manufacturers can accommodate that format. Then, it was showing retailers and consumers how the product is different. Harrington and Klane also devoted time to creating packaging that separated Yasso from its fierce frozen competition.

"We took a disciplined approach to the question, how do we stand apart from the competitors and do things differently?" Harrington said. "Seven years later there's been a lot of copycat brands that have mimicked our packaging."

Still, from the outset, Klane and Harrington decided to follow the example of a company they admired: Ben & Jerry's.

"Why we look at Ben & Jerry's as a role model for us is that they brought a lot of fun, excitement and innovation to the category by way of their flavors, brand voice and positioning," Harrington said. "We feel that Yasso is the new era of that generation of fun, but most importantly, better-for-you dessert. We're doing the best of both worlds."