Tiesta Tea aims to simplify options for customers by explaining the function and flavor of each of its loose leaf tea packages.

At the start of their loose leaf tea business in 2010, Tiesta Tea founders Dan Klein and Patrick Tannous said they knocked on an estimated 500 doors within 20 days to sell their product.

The pair, friends since preschool, aimed for their business to capture their experience drinking loose leaf tea in a Czech tea house during a European vacation while college students. Like many Americans, they were not familiar with tea outside of bottles (even bagged tea significantly lags behind ready-to-drink tea).

Related: Her Brand Is Practically Millennial Bait, But This Entrepreneur Still Has to Overcome Steep Challenges

"We were just surprised at how good it tasted, and we said why aren't more people in the U.S. doing this?" said Tannous, president and co-founder of Tiesta Tea. "It dawned on us that tea in the U.S. was extremely confusing, hard to find and super expensive. So we wanted to create a brand that made loose leaf tea feel a little more understandable, accessible and affordable to mainstream consumers."

Klein, who serves as CEO of the company, had a high school friend whose cousin is the founder of the World Tea Expo, so with that connection, he and Tannous were able to purchase loose leaf tea from suppliers, using money they received from their school's business program. They then got more funding from investors, including Jimmy John's founder Jimmy John Liautaud.

The crux of Tiesta Tea is that its products are divided into functions: "Energizer," "Slenderizer," "Eternity," "Immunity" and "Relaxer," along with flavors under each. These clearly illustrate to consumers what they can expect a tea will do. Klein and Tannous then embarked on their door-to-door operation. It helped them figure out who their customer was, and more importantly, who it wasn't.

"We determined that grocery stores were really the best avenue for us," as opposed to restaurants, Klein said. He added that at that point, loose leaf options at the grocers were lacking. These retailers also gave Tiesta the opportunity to sell accessories, such as brewing kits and tea filters, alongside its teas, helping to educate potential customers browsing the shelves. 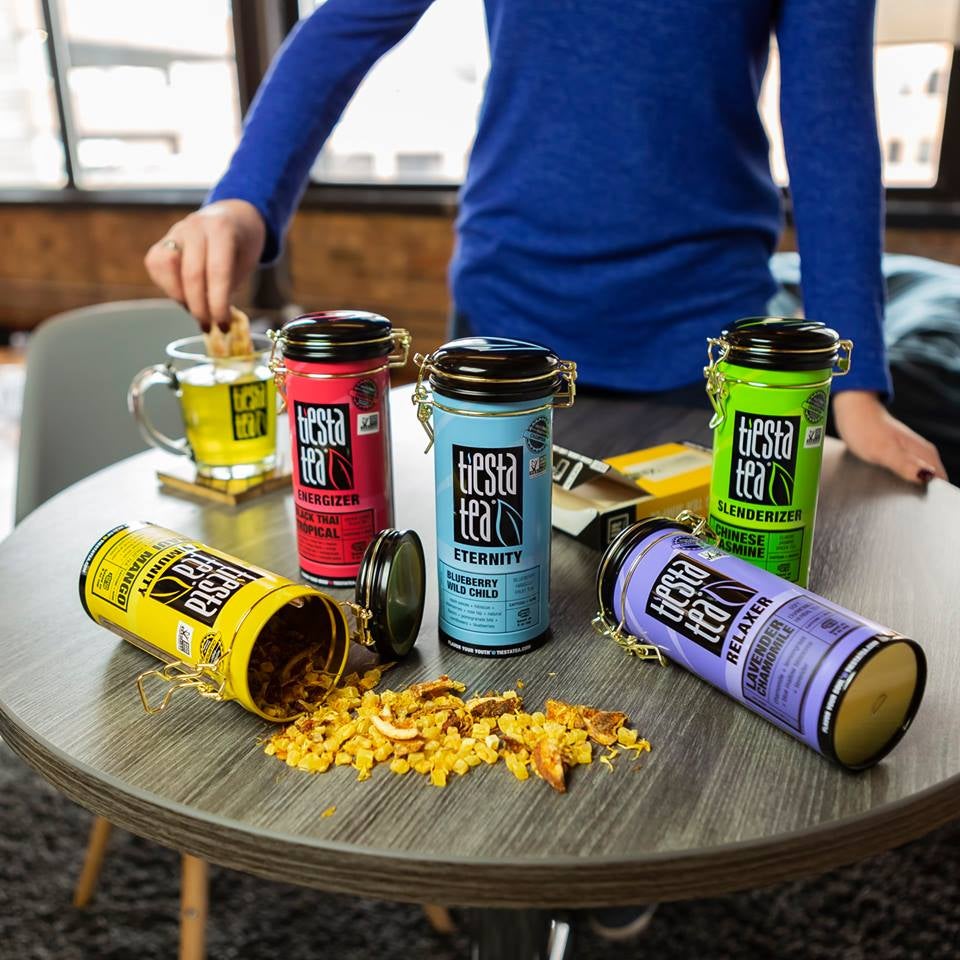 "This is a premium product," Klein said. "And it does take some education for people to understand why they should be making loose leaf tea."

What helped the company, both founders said, is the so-called third wave of coffee, which inspired people to care more about the quality of beans as well as their origins, as well as the work done by Teavana, a loose leaf tea company that was acquired by Starbucks in 2012. Although many of that brand's stores started closing from 2016 to 2017, it presented Tiesta Tea an opportunity to pitch directly to its customers, Klein and Tannous said.

Business has been good. The company said that in 2014, its revenues were $1.9 million. In 2018, revenues rose to $7.6 million. The brand's products can be found in 7,500 retailers, including Target stores, which gave Tiesta Tea its first big break and exclusively carried its first bottled tea product. Another bottled tea line will be sold in Duane Reade starting in March. Its top-selling products are all varieties of loose leaf tea: Maui Mango, Fruity Pebbles and Blueberry Wild Child.

Related: The Creator of the Kombucha Category Says the Term 'Serial Entrepreneur' Makes Him Sick to His Stomach

The company has also started efforts to provide ready-to-drink tea at eateries, with a pilot at a Chicago-based poke chain. Tiesta also has a social campaign to build water wells in Nigeria, with construction on its third beginning.

Tannous, looking back at almost a decade in businesses, said its door-to-door campaign was when the Tiesta Tea founders hit their stride and learned their most important lessons.

"You've got to outwork your competition and listen to your customers," he said. "Listen to the people who are buying your tea and work harder than your competitors."