A mission to eliminate food waste is also a complex marketing issue for The White Moustache.

Where there's a will, there's a whey, and the women behind Brooklyn-based yogurt company The White Moustache have plenty of both to go around.

Within their first year working together, owner Homa Dashtaki and head yogurt maker Jennifer Anderson became unsettled by the amount of milk they were wasting. In making The White Moustache's Persian-style yogurt, only 65 percent of the milk is yielded as thick, creamy yogurt. The rest comes away as a neon-colored liquid, called acid whey, during the straining process.

For large-scale manufacturers of dairy products such as Greek yogurt and cottage cheese, the straining process can be even more wasteful, with as much as three quarters of the initial milk volume converted to acid whey. Left with a higher volume of acid whey than the yogurt itself, companies often have no choice but to dispose of the byproduct in environmentally hazardous ways, such as spreading it as fertilizer or dumping it. It then trickles down to aquatic ecosystems, where it depletes oxygen.

The USDA and other organizations have spearheaded research into possible solutions for excess acid whey, such as breaking it down into marketable components (water, lactose and protein) or converting it into biofuels. But The White Moustache has a more straightforward idea.

Dashtaki and Anderson are staking The White Moustache's future on what may just be a complex marketing issue: How do you convince Americans to consume something they have always thought of as garbage? Right now, the company has a staff of seven, and it sells yogurt with 41 retailers and whey products with 15. Before Dashtaki scales her yogurt business, she's determined to convert more people to whey.

In Iranian culture, food waste is practically unheard of. Acid whey has all of the same probiotics and minerals yogurt does, and Dashtaki likens the two to egg yolks and egg whites. "It's like trying to explain egg whites to people who have never seen a yolk," she says. Many people don't understand that yogurt and whey are one in the same. 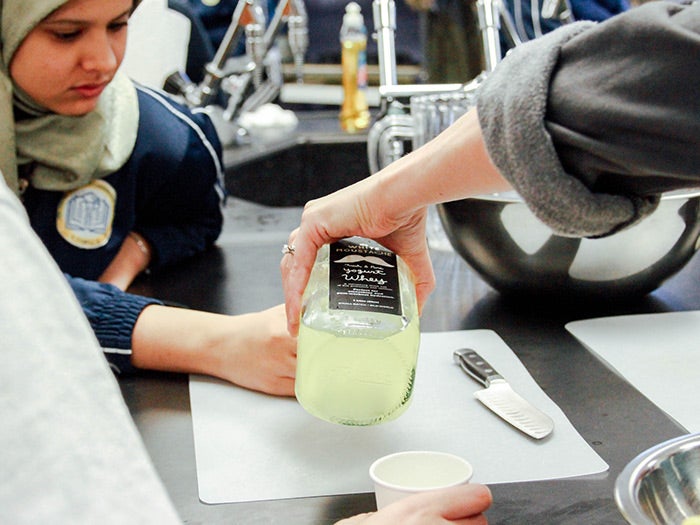 The White Moustache is working to educate the public about the merits of acid whey, particularly as a beverage. Last year, owner Homa Dashtaki visited a high school classroom in Queens, N.Y., as part of a lesson about food sustainability.
Image credit: The White Moustache

Dashtaki has faced naysayers before. She started her business in southern California in 2011 and quickly found success at farmer's markets. But before long, she got a call threatening a shutdown and fines unless she complied with costly re-pasteurization requirements. After months of battling state regulators, she packed up and moved to New York, joining other indie dairy purveyors in Brooklyn.

By mid-2014, Dashtaki had teamed up with Anderson, and the two started getting serious about finding ways to sell drinkable whey. One day, Anderson hosted a brunch with friends at her nearby apartment, and afterward she brought leftover fruit juices to the factory and began mixing them with whey.

Whole Foods in New York had already been carrying The White Moustache's yogurt when Dashtaki and Anderson presented the idea of whey to the grocery store's local forager, Elly Truesdell. Anderson says Truesdell already had an interest in finding uses for food byproducts and immediately signed on. The store began selling plain whey, meat brine and flavored drinks, and other retailers soon followed.

As of August 2014, Dashtaki and Anderson stopped focusing on yogurt, save for one daily batch. That's when The White Moustache committed to selling all of its whey before expanding its yogurt business.

Related: How to Make Sure There's a Market for Your Business Idea

The average American's skepticism surrounding whey may make it seem like The White Moustache is doomed. Most Americans hear "whey" and imagine Little Miss Muffett or protein powder. They typically don't think of whey as a cooking or mixed-drink ingredient, let alone something that's even safe to consume. Dashtaki recalls one especially averse reaction, when someone asked her if drinking straight whey would cause them to throw up.

"Trying to change people's minds is very hard and very slow," says Jack Trout, a marketing consultant and author who is not optimistic about The White Moustache's mission. "It's going to take an enormous amount of education, which is very expensive in a very competitive world. All I can say is, goodnight and good luck."

But The White Moustache is up for the challenges ahead. The company has branded its drinks, now available in four flavors, as "probiotic tonics" -- the aim is to intrigue health-conscious customers rather than turn people off with an unfamiliar term. Some New York restaurants cook with the company's acid whey and buy it in bulk, and Eataly in New York is the most recent of the 15 retailers that carry The White Moustache's whey products. The company's revenue is up 30 percent year over year since April 2015. 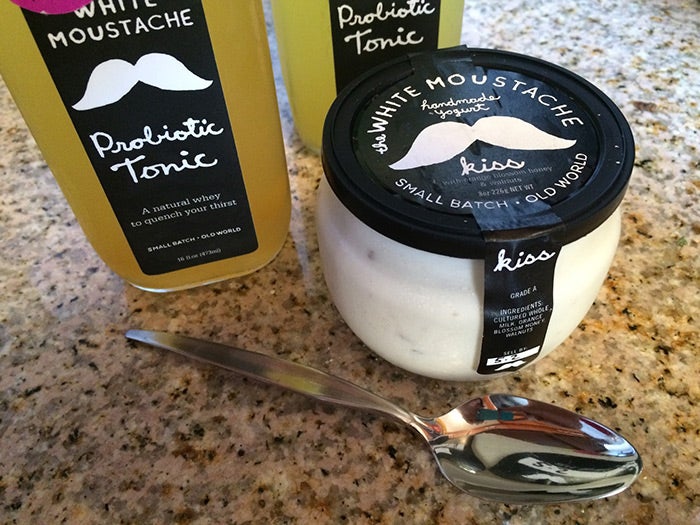 While The White Moustache has a demand for nearly three times its current yogurt output, the company only produces one batch per day so it can focus on devising new flavors and marketing strategies for its whey products.
Image credit: Lydia Belanger

A few major dairy companies, such as Denmark's Arla Foods, have developed products containing acid whey over the years. In Iceland, makers of a popular yogurt-like soft cheese product called skyr bottle and sell acid whey and call it Mysa, but supply exceeds demand. In the past few years, General Mills has filed patents for methods of neutralizing the whey to expand its potential uses. And in April 2014, a Wisconsin dairy scientist named Larry Bell filed a patent for a "nutritious beverage formed from fluid acid whey and a method of forming a nutritious beverage by combining fluid acid whey and a juice."

That is to say, The White Moustache seemingly stands alone in the American market with acid whey-based products. Also, unlike Bell's proposed beverages, Dashtaki and her team's fruit juice whey products do not contain added sweeteners.

To inform the public about acid whey, Dashtaki and Anderson have tied recipe tags to the bottles, attended foodie events such as Taste of Red Hook and Cheers NY and hope to conduct in-store demonstrations once the company grows. They're even in the process of writing a cookbook, for which they're inventing and taste-testing several recipes, as well as launching a "whey counsel" via the web.

The pair's main strategy is to get the message out to people who already understand the value of whey, such as its restaurant partners and Whole Foods's Truesdell. "Working with them keeps us going and gets us talking about it in the right ways," Dashtaki says.

Meanwhile, acid whey is on the radar of food scientists. Last year, market research firm Mintel presented acid whey as one of the "five ingredients to watch," as its use increased by 129 percent between 2010 and 2014. It's becoming a popular drink ingredient in Europe, according to Food Business News.

Dashtaki is driven to one day sell "every drop" of The White Moustache's byproduct, and Anderson's dream is to open up a cafe with whey on tap. Then there's their broader goal.

"We're hoping that we can help create a demand for it," Anderson says. "Then, other yogurt makers will be motivated to start selling their whey."