Tips to Consider When You're Ready to Sell

HARO founder Peter Shankman shares insight from the sale of his business.

By Eileen P. Gunn
May 12, 2011
Opinions expressed by Entrepreneur contributors are their own.

About a year ago, Peter Shankman, the founder of HelpAReporterOut, faced a choice entrepreneurs both dream about and dread. He could work on his own to continue growing HARO, an ad-supported, web-based service that connects reporters with expert sources. Or he could accept a buy-out offer and have access to money and resources but work for someone else.

Like many entrepreneurs, Shankman readily admits, "I don't play well with others." As a serial entrepreneur, he likes getting ideas off the ground better than running a business. An acquisition would give him resources to grow with but also relieve the administrative hassle of running a business and let him focus on the creative and strategic work he enjoys. So over martinis at Morton's Steakhouse, he accepted an offer for an undisclosed sum from Vocus Inc., a large marketing technology company in Lanham, Md. Since then, Shankman, who is 38 and based in New York, has added to the site's features and about 175,000 sources and reporters are using the list, up from 100,000 at the time the deal closed about a year ago.

According to online small-business marketplace BizBuySell, 3% more small-business sales closed in 2010 than in 2009. This number is expected to continue to rise as credit eases and financials improve along with the recovering economy.

Related: Video -- How to Get the Press to Write About Your Company

Shankman spoke with Entrepreneur.com about why he took the deal. If you are thinking about putting your company on the block, there are lessons to learn from his experience. Excerpts from our interview follow. 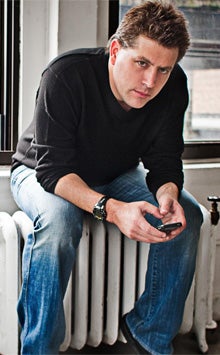 HARO started as a Facebook page in 2008. At what point did you start thinking of it as a business?
HARO was supposed to be for fun. I was making enough with my speaking and consulting. Then people asked to advertise and I can't turn down money, so I started to sell advertising. The first time I realized it could be something was when we made $20,000 in revenue in one week. I thought, 'holy mackerel.'

You considered selling it almost as soon as it started to take off. Why?
When I ran my PR firm [before HARO], I had 15 to 20 people working for me. At that point, it was more about getting people health insurance than about building the company. It was no longer fun and exciting. After a year and a half, HARO had become a full-time business, but it was still fun and exciting, and I didn't want to get to the point where it wasn't. Also, I wanted to make the company bigger and knew I couldn't do that easily on my own.

How did the sale go down?
There were some other offers but none were as serious and straightforward as Vocus. They were the nicest. They "got" me; they told me they didn't want to change a thing.

The first meeting was over martinis at Morton's.

We came up with a basic premise of how much it was worth by taking the revenue it was generating, adding some multipliers and coming up with a number that worked for all of us. Then there was four months of lawyers.

What was the biggest challenge?
There was a lot of due diligence, producing documents and getting things notarized.

I thought I would show them revenues and Quickbooks statements and that would be enough, but nope. They asked for details around when we made a certain change and why. I don't do things in a formal way, that's not my style. I would have to go dig out emails.

Related: When You're Ready to Sell the Business

One example: They asked why we offered a "good mood" discount on a particular day, and my answer was, "I don't know; I guess I was in a good mood." Then I had to dig out the emails about it.

The next time around, I would be a better bookkeeper and take better notes about everything I did as I went along.

How did you decide which details to leave to your advisors?
I was happy to let my lawyer handle everything. I had to get him the data and details they wanted, but then he handled everything. I've had him for 13 years. That's what you do as an entrepreneur; you find people you like and trust and hand things off to them.

Still, the last couple of weeks were really tough. You get to a point where there is nothing you can do but sit and wait for other people to get things done. I spent a lot of time on my Stairmaster trying to not go insane while I was waiting for that to happen.

What's changed and what's stayed the same since the deal closed?
The things that were important to me were that I stay in New York and that my two employees stay working for me. And I wanted to still have time for my speaking and consulting.

In practice, they do pretty much let me do what I want on my own. I still write the ads. I had two employees. I still work with them. Everyone up here still works from home, same set-up as before.

But Vocus takes care of bills and payments. It's easier to run a company when you have someone taking care of that stuff.

We're bringing on more editors in the corporate office [in Maryland]. The technology is better, so there's quicker service and better ways to access it. We're building more tools related to HARO. Vocus also owns PRweb [a website that offers press release distribution to small businesses]. So we're working with them to build tools for small businesses.

Also, make sure the company is fun to work for. Because we're in the same industry, I'd had conversations with people from Vocus in the past, and they seemed nice. So I expected them to be nice, but you never really know. I also knew who else they had acquired in the past, and it seemed like a good fit overall. So my gut feeling was that it would work. And it has.