The Stripped Down Strategy Behind Naked Pizza

Combining social media buzz and a healthy focus, this alternative pizza company is poised to explode with 300 franchise stores.

By Fawn Fitter
August 11, 2010
Opinions expressed by Entrepreneur contributors are their own. 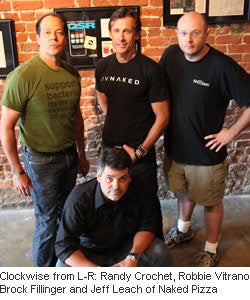 New Orleans-based franchisor Naked Pizza announced last week that it has signed multiunit area contracts in four more U.S. cities, is opening two test stores in Dubai by the end of the year, and plans to expand into Abu Dhabi by 2011.

That gives Naked Pizza more than 300 stores under development in 18 markets just 10 months after launching its franchise operations. Yet the grand opening of its first franchise location, in Miami, is still several weeks in the future.

It's true that takeout and delivery pizza is a proven business model that's made to scale. It's also true that Naked Pizza has fueled its expansion by choosing to award franchises only to experienced multiunit developers willing to operate at least five and as many as 50 locations in their area. Yet at this writing, its only store is a test kitchen in New Orleans.

So what's behind Naked Pizza's explosive growth? If you consider it "going viral," you're not far from wrong.

Co-founders Jeff Leach and Randy Crochet are frequently quoted as saying that Naked Pizza isn't a pizza company, but a social media company that sells pizza. In fact, their entire business plan is based on using social media and rapid expansion to promote a healthier version of a popular fast food, one with no sugar or trans fats and about half the calories of the competition's products.

Then they take it one step further by using their healthy-yet-still-tasty pizza to get people thinking, talking and tweeting about how to solve the global crisis of diet-related obesity and illness.

Leach, an anthropologist who studies ancient diets and nutrition, created Naked Pizza's recipes using whole grains, all-natural ingredients and probiotic bacteria. In the company's early days, he blogged passionately and at length about digestive health and glycemic response, and the urgent need to confront the obesity epidemic. Customers and potential investors didn't seem to care.

"We wanted to build a business based on what we needed to do to achieve cultural influence, but people don't want 1,500-word lectures and finger-wagging," says business partner Robbie Vitrano.

Then the company sent its business plan to billionaire Mark Cuban. He invested in the business and made introductions to other investors, including The Kraft Group, owner of the New England Patriots. He also began delivering business advice, including one insistent tip: Start using Twitter to promote both the pizza and the mission behind it.

Naked Pizza rented a billboard in New Orleans to announce its Twitter handle. It started tweeting about topical issues involving food, health and policy, as well as special promotional offers. It set up a Facebook page to gather more fans. It began posting videos on YouTube introducing viewers to the store, the food and the founders' desire to change the world through pizza.

"Whether we're right or wrong, we have an opinion and a perspective, and we put it out there," says Leach. "That little kick makes all the difference in the world when you aspire to scale."

By the time they started to offer franchises in October 2009, Naked Pizza had more than $500,000 in annual revenue from a single store--and thousands of online followers around the country.

"Some people have a mission in life, and that's a very interesting thing to be a part of," says Augie Ray, senior analyst for social computing at Forrester Research, an independent company that studies the business implications of changing technology. "Naked Pizza wouldn't be as interesting if [it] just used [social media] to broadcast marketing messages. It's an organization that's...engaging people in things they care about, offering a mix of promotional messages within the context of relationship-building."

Potential franchisees took notice; within six months, the company was fielding more than 4,000 inquiries from all over the world. Naked Pizza signed its first area franchising contracts this spring with operators in Miami, Orlando and Tampa, Fla.; upstate New York; Boulder, Colo.; and Louisville, Ky. In June, it announced further franchise awards in Boston; San Diego and Orange County, Calif.; New Jersey; Cincinnati; and Lafayette, La., as well as in its hometown of New Orleans. The latest awards cover Denver, Las Vegas, Salt Lake City and parts of Washington, D.C.

In addition, the company is opening two locations this year in Dubai under the less-suggestive name of NKD Pizza, and hopes to expand into Abu Dhabi by year's end.

"Nobody believes Domino's and Papa John's when they try to tell you they're giving you healthier options," says co-founder Crochet. "That's the invisible barrier against our larger competition trying to get into what we're doing. We're ahead of them, and we've got the rocket fuel."