5 Key Lessons Every Entrepreneur Can Learn From 'Unbroken' Louis Zamperini

You've read the book or seen the film, now apply the wisdom of this true story of persistence and overcoming all odds to your endeavors. 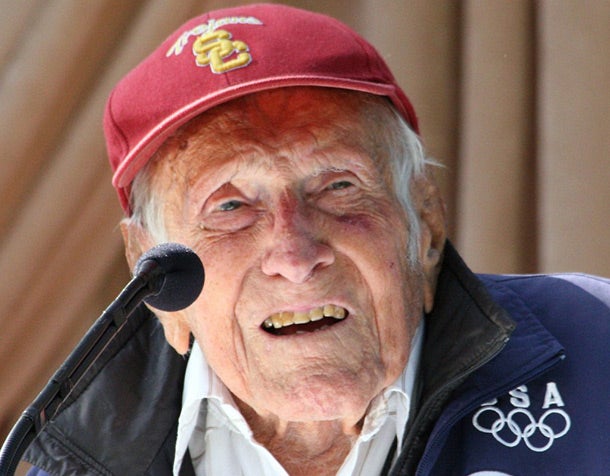 Unbroken could be one of the most influential books you read and films you watch this year. What does a film about the olympian, World War II bombardier and prisoner of war have to do with being an entrepreneur? If you've been exposed to the life of Louis Zamperini then you already know: this guy had guts. He led an extraordinary life and refused to give up in any situation. Entrepreneurship is based on the same defining character traits that Zamperini exemplified throughout his life.

Here are five of the key lessons you can learn from Zamperini.

1. Thank your lucky stars it's hard.

Zamperini didn't grow up with any special advantages or skills. In fact in many ways, he was at a disadvantage. His family came to California when Zamperini was a kid and he spoke no English, making him an easy target for bullying. He got in a lot of trouble in his youth. He worked hard to train and become a runner, a pursuit that eventually took him to the Olympics.

Whether it's truth or fable, the oft-repeated line in the film is, "If you can take it, you can make it." That ability to take the challenges and hardships life throws your way is what defines an entrepreneur. Don't lament the hurdles that lie in front of you as an entrepreneur: embrace them. Run toward the conflict and rise to the tasks at hand.

Innovation comes through solving the world's problems, not by having an easy answer to an easy existence. Be glad it's hard: that's why you'll be so good.

It's crucial as an entrepreneur to engage in small, calculated and continuous risks. Your ability to take and survive risks will help build up your confidence in yourself. Your risks will also develop the courage you'll need to face fear in the future when it comes time to take the bigger risks.

Zamperini certainly understood that taking risks sometimes meant failing, but ultimately meant big rewards. He took the risks necessary in running to make it to the Olympics and during his days as a POW to survive the war. Taking risks is part of the entrepreneur's path and the more you develop the ability to be comfortable with being uncomfortable, the greater your long-term rewards will be in your life.

3. Failure is a huge part of the journey.

Never let your failures define you or you've lost the game. Zamperini was shaping up to be a total failure as a kid. He was getting in fights, drinking by age eight, robbing strangers and neighbors alike and in pretty much every other way misbehaving. By the time he was a teen his parents knew the local police very well. That's not what you'd call a model start, but with the right support from others and initiative from himself, Zamperini turned things around. It would've been easy to give up and define Zamperini as a failure, a lost cause and a bad bet.

Where are you in your entrepreneurial journey? Don't let others cast the die and define your success. Never let failure define you. You can always find the right support and you can always, always take the initiative to keep improving. An entrepreneur's path is never straightforward, simple or easy. Embrace the failures you've faced and keep moving forward.

4. The right support makes all the difference.

Speaking of support, it's debatable whether Zamperini would've reached his Olympic success without the support of the right mentors. It wasn't just his parents that didn't give up on him during his misspent youth, but his brother, the school's track coach and even the police became active mentors in coaching Zamperini into a different path that eventually led him to the Olympics.

Surrounding yourself with the right people who believe in you, support you and will rally for you when you're off track will get you far as an entrepreneur. Likewise, remember that you can give that support and encouragement to other entrepreneurs and up-and-comers in your startup communities.

When Zamperini was stranded in a life raft with the two other survivors of the crashed flight, and later in the barracks of the POW camp, he would talk about his mother's cooking and other fond memories to improve morale. He actively lent support to the men to keep spirits high.

We all need people to believe in us to help us achieve our best. So get yourself in the right supportive environment and lend a hand to those in need of your mentoring as well.

Zamperini didn't just embody the message of never giving up, he literally wrote the book on it. At 97 years old he published and co-authored the book, Don't Give Up, Don't Give In: Lessons From An Extraordinary Life. If anyone is qualified to give you advice, wisdom and insights into the indomitable spirit you'll need in entrepreneurship and in life, it's Zamperini.

Related: 3 Lessons for Every Business From an Olympian