We're not going out on a rotting limb when we say this: America has an insatiable appetite for the undead.

First it was the twinkling vampires of Twilight. Now we're obsessed with zombies -- the soulless, brain-eating corpses that have limped their way into our hearts on AMC's insanely popular gore fest, The Walking Dead.

The post-apocalyptic drama's Season 4 finale set a new record, racking up 15.7 million viewers in all. Even the Centers for Disease Control and Prevention offers "Zombie Preparedness" tips. Clearly we can't get enough of clumsy, cannibalistic cadavers.

Enter the bubbling zombie economy. From zombie cons to zombie walks, zombie proms and zombie weddings, all kinds of zombie-related activities and businesses are rising from our morbid fascination with walkers. Even zombie survival camps are creeping up across the world, because, well, as Canada's Zombie Survival Camp puts it, "you can't enjoy the apocalypse if you don't survive." Good point. 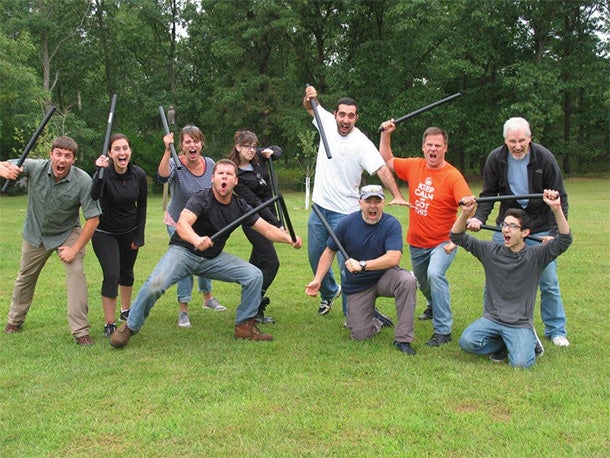 That's where trainers like New Jersey's Mark Scelza come in. Just about every weekend for the last six years -- a full two years before The Walking Dead's inaugural episode on Halloween 2010, he proudly points out -- he and his wife, Suzanne, have run a zombie-themed survival skills boot camp. Most of the macabre magic happens in a grassy open field somewhere in the center of the Garden State. Scelza doesn't like to reveal his camp's exact location, but says it's near a small town called Whiting.

The couple's Zombie Survival Camp equips up to 20 people at a time (ages 15 and older) with a killer combination of combat, firearm, emergency preparedness and survival skills to, yes, outlive the undead, you know, should they ever attack.

"Zombies, these scary, sick, dead beings that want to bite you, to hurt you, they're the perfect theme to bring a survival skills course to life," Scelza says. "Gamified zombie play is our way of making learning real skills that you can use in real life fun." 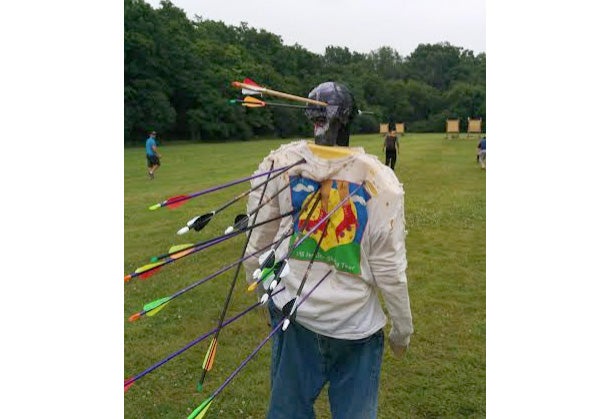 According to Scelza, a veteran NRA-certified firearms instructor, there are several ways to put a zombie out of its misery. They're all equally gnarly and his campers try their hands at them all -- hand-to-hand scrapping ("Zombitsu!"), clubs, daggers, machetes, swords, Darryl Dixon-style crossbows, and, heck yeah, real, live ammo-loaded firearms (pistols, shotguns and rifles, oh my).

As zombie fever continues to rise, so have camp profits, but not enough for Scelza to quit his day job. Not yet. For now, he'll keep his 9-to-5 gig as a regional manager in the firearms sales sector. And his wife, a former competitive bodybuilder, will stick with her compliance officer position in the insurance industry. Eventually the pair hopes to franchise their swelling zombie startup.

If you don't have the time, money or nerve to become a weekend zombie warrior and a walker happens to cross your path and come after you, Scelza says you'll probably be safe if you "Just run away." That is if the creature is slow. If it's fast, "You gotta' shoot "em right in the head. It works."

Eric Somerville, who co-founded Zombie Survival Camp with his college friend Peter Lane in Ontario, Canada, (no affiliation with Scelza's operation) doesn't believe in taking zombies out with guns. "Every time you fire a gun, you're essentially ringing the zombie dinner bell," he says. "You can hear it for miles around, so we prefer arrows. They're retrievable and reusable." (Note: Somerville doesn't actually believe in zombies.)

Canada's first zombified wilderness survival skills camp launched two years ago with only two weekend camps per year. But, thanks to increasing media coverage, repeat customers and Walking Dead-fueled demand, Eric says his bootstrapped upstart now offers six camps throughout the year. They're held in a handful of appropriately "creepy" locales al fresco, including on Lake Couchiching in Orillia, Ontario, on Beaver Lake near Bancroft, Ontario, and on a forest-hemmed prairie in Steinbach, Manitoba. Each eerie excursion costs $250 per survivor.

Here's how it works: A fresh batch of campers arrive on Friday. They meet-and-greet and take in goosebump-inducing lectures on the finer points of "zombie survivalism." On Saturday, they buckle down and practice archery, "Zom-Jitsu" ("hand-to-rotting-hand combat") and melee weaponry (how to stop zombies in their tracks with machetes, crowbars and "anything you can grab and strike with").

Then there's tactical field craft, which is basically "how not to get surprised by a zombie like they always do in every movie and TV show in the subgenre," Somerville says. Basic survival skills (fire, water, shelter) are also taught, "bug-out bag" building included. In case you get hungry hunting zombies, wild edible foraging is also on the syllabus. Nutrient-packed dandelion stem, anyone?

Then, at last on Sunday, comes the big chill everyone's waiting for: the simulated zombie outbreak, when campers put their newbie skills to the test. Rowdy, full zombie makeup and fake blood-splattered rounds of LARP (Live Action Role Play) ensue. The ultimate goal: Survival! Or, erm, not having their brains eaten with a side of beefsteak fungus.

Will graduates from crazy boot camps like these ever get to try their fledgling zombie dodging/slaying skills out on the undead in real life? "Probably not," Mark admits, "but I'm not ruling it out."

Does it really matter? No. Because even if zombies aren't real, the survival skills campers learn are -- and the business of teaching them is alive and well.

How to Go Green

Three Letters That Will Make Your Company More Successful and Sustainable