From MMA Champ to Whiskey Entrepreneur: a Conversation With Conor McGregor

"Something about simply endorsing an Irish whiskey didn't feel right to me -- I wanted to create my own."

Conor McGregor didn't take any time off from his grueling schedule while he was developing Proper No. Twelve, the Irish whiskey he launched this past September. "I was in training, I was fighting, I had a kid," he tells Entrepreneur, "but I'm a perfectionist; I don't do anything half-assed." It was vital for the MMA champion to be as hands-on as possible throughout the process -- and his hard work has paid off.

In addition to positive reviews for the brown stuff, liquor stores -- including the British grocery behemoth Tesco -- are putting signs on their displays limiting the amount of Proper No. Twelve consumers can buy due to bottles selling out too quickly. A sample that was sent to the Entrepreneur office was gone soon after it arrived, thanks in no small part to its sweet, peaty flavor and all-around smoothness. (Our editors' proclivity for free alcohol had nothing to do with it, we swear.)

"I wasn't going to sacrifice the quality of Proper No. Twelve to check it off the bucket list -- this project means way more to me than that," McGregor tells us. Read on to learn just how fun the development process was, how his MMA training translates to the liquor business, and which opponents he'd never, ever want to share a bottle with.

We loved the sample of Proper No. Twelve sent to the Entrepreneur office. What made you decide to make a whiskey in the first place?

Great to hear you loved it! I call it liquid gold. The decision to make my own Irish whiskey was very natural, almost inevitable. I've always loved Irish whiskey -- I'm an Irishman after all. My late grandfather played a huge role in my taste for Irish whiskey. It was under his tutelage I began to study and truly appreciate whiskey.

Over the years, I've been approached by many Irish whiskey brands asking me to endorse their product. I have nothing against endorsement deals; I have several with brands and products I believe in, that is no secret. However, something about simply endorsing an Irish whiskey didn't feel right to me -- I wanted to create my own, I wanted to do it my way and I wanted to do it right -- from start to finish. I love Ireland, its land and its people. I was born here, will raise my children here, and I will die here. I wanted to make an Irish whiskey emblematic of our culture as a whole -- something that would make my people proud.

Proper No. Twelve has sold more than most brands sell in a full year in the first few weeks on the market. It's also selling out all over the place -- to what do you attribute this success?

The reaction to Proper No. Twelve has been absolutely amazing. I'm extremely humbled and thrilled that consumers are as excited about Proper Twelve as I am! Hundreds of thousands of people from all over the world have been reaching out asking where they can purchase a bottle. I am lucky to have the best fans in the business, and their support and loyalty has definitely played a role in Proper Twelve's success. In 10 days we sold six months' worth of product.

I just got back to Ireland after spending 10 days traveling throughout the U.S. to meet buyers from top accounts, distributors and consumers. The reception to Proper No. Twelve was energizing. My favourite part of the trip was hand delivering World Series tickets to the Boston Fire Department. It's hard to articulate what a special experience it was to shake their hands and thank them for their hard work. Truly humbling.

You created this whiskey yourself. What was the development process like?

The moment I decided I was going to do this, make my own Irish whiskey, I assembled a team and we began developing the brand under the project name "Notorious." I think we expected it to be a little easier than it was. It turned into a long, complicated project, but I wasn't going to rush it. I know better than anybody that there is no substitute for hard work. 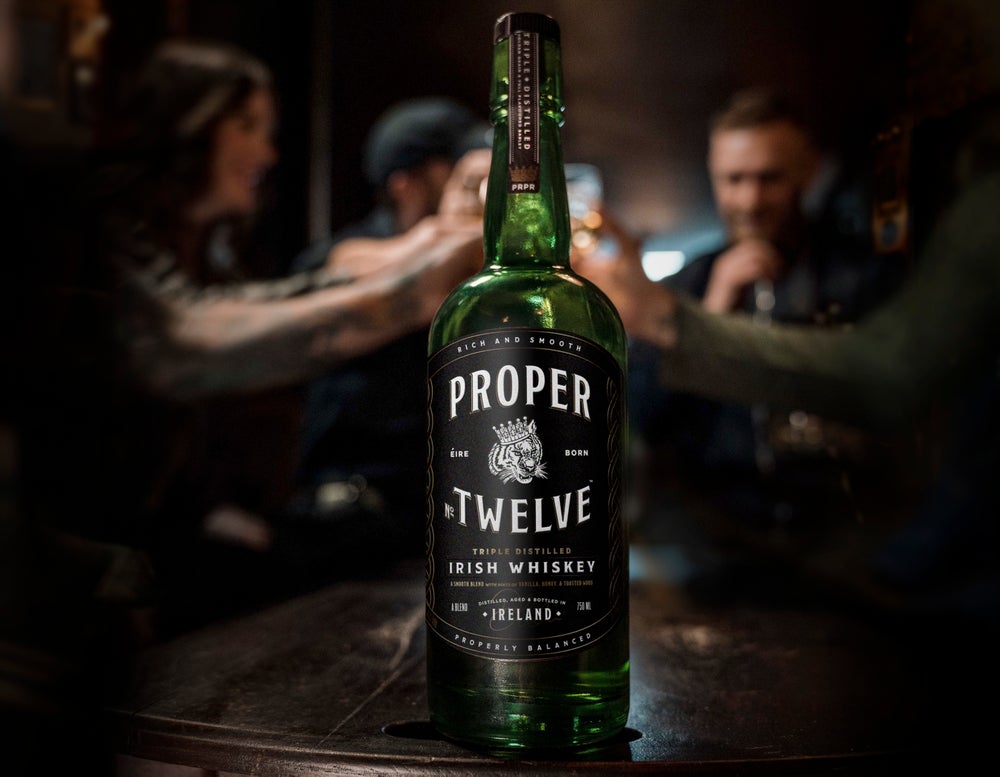 Proper No. Twelve is a custom blend of grain and the finest single malt that is great neat, on the rocks, in a cocktail or as a shot. The project name of "Notorious" became Proper No. Twelve to salute my history. Sure, it's my brand and my company, but it is much bigger than me. This is a brand that stands on its own. The name is directly tied to my hometown of Crumlin, Dublin 12 and the fact that it is a proper Irish whiskey.

The tastings in particular must have been fun.

Oh yes, it was fun and still is. From the get-go, I wanted to create a blend that could be enjoyed by everyone and to price it for everyone. The tastings were loads of fun, but also very interesting -- I had to do my research! I continued to hone in on which flavors and profiles I did and did not want for my whiskey until it was proper and right. This blend is our first expression and we are already working on what comes next for Proper No. Twelve. It will be tasty, that you can bet!

Did you take any lessons you learned from MMA in developing/marketing Proper No. Twelve?

Absolutely. I always apply the lessons learned throughout my life to whatever the current project is at hand, so MMA/Proper No. Twelve is no different. A strong work ethic, the desire to learn and holding yourself accountable will get you far. It would've been easy to just sign an endorsement deal or have someone else do all of the hard work, the tastings, etc. and just give me an overview. But that's not how I do things. Proper No Twelve is who I am, and although I was anxious at times to just launch it -- I couldn't wait to share it with the world -- I'm so glad I took the time, put in the hard work, have the best team in the business and launched it properly.

For every case sold, you're donating $5 up to $1,000,000 annually to first responders. Why is that cause so important to you?

That's right. First responders are true, proper heroes. Their line of work is the ultimate act of valor and utter selflessness. They put their lives on the line daily. They run into buildings -- to save complete strangers -- when everyone else is running out. They operate under the "one for all" mentality, and to me that is heroic. It's an infinite honor to be able to give back to first responders globally, as a way to say thank you for everything they sacrifice to keep our families and our people safe.

Who would you rather share some Proper No. Twelve with, Khabib Nurmagomedov or Floyd Mayweather?

To be honest, neither. I drink Proper No. Twelve with those close to me. My friends and family and those I grew up with, that is whom I like to sit and have a glass of Proper whiskey with. I also love to enjoy it with customers and consumers in bars. That has been even more fun than I expected.

In the last five years, you've gone from a plumber receiving welfare checks to becoming one of the highest paid athletes in the world. What advice would you give aspiring entrepreneurs looking to achieve their dreams?

You've got to be passionate about what you're doing. Find your passion and chase your dreams, fearlessly. I've had a lot of crazy dreams in my life, and they've all come to fruition because of my passion, hard work and will to succeed. You've got to put in the effort day in and day out to perfect your craft, and never give up. Never settle, never be complacent, stay hungry to learn and always try to be better than you were yesterday. If someone tells you no or doubts your ability, fuck 'em. I don't care what they think. I believe in myself and never waiver from that mentality. That's how I got to where I am today. Surrounding yourself with the right people is important too. Loyalty is everything. You've got to have a strong support system, people who genuinely believe in you and want you to succeed. My team -- who have become my brothers and sisters -- my family and close friends have gotten me to where I am today.