When Steve Kaufman's son Alex was 13 years old, he was diagnosed with scoliosis, a curvature of the spine that can lead to a myriad of health problems if not properly treated. To avoid having large metal rods surgically implanted in his back, Alex had to wear a big, bulky torso brace for 22 hours a day.

The brace stopped Alex's spinal curve from getting worse, but it also prevented him from bending over and putting on his shoes by himself. Not being able to complete a basic, everyday task of this nature can be humbling for anyone, let alone a teenager who longs to fit in. This worried Steve.

"He was cinched in the brace as tight as he could stand it, and he couldn't deal with his shoes himself," Steve says. "It had become an issue for his self-esteem and he wanted some independence. When it was taken away from him, I wanted to give it back."

So the concerned father and former robotics engineer decided to solve the problem himself. "One day, the lightbulb went off," he says. "I stayed awake in bed all night, brainstorming prototypes of sneaker-style shoes Alex could easily slip on and off, all on his own."

Out of that desire -- motivated by a father's love and care -- Quikiks was born. 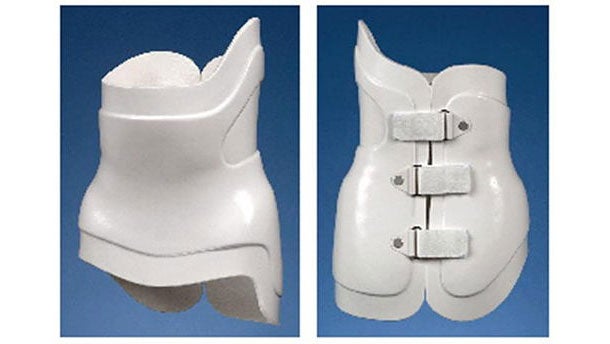 Steve claims Quikiks are the first totally hands-free, fastening orthotically supportive footwear of their kind. To put them on, the wearer slides his or her feet into the shoes. In one step-in motion, the sneakers automatically fasten to the feet, without the wearer ever having to bend over or use their hands.

The key to the shoes' slip-on capability is Steve's patented "Step-in-Go" technology. Thanks to a clever mechanism, the shoes rotate open at the heels, creating a large entryway so you can slip your feet inside. When you press your feet down, the pressure automatically rotates the heels shut. A strong embedded magnet helps to keep the shoes fastened. To take them off, you simply strike your heels on the floor. The momentum and force automatically spring the shoes open, so you can slide your foot out.

Steve designed the first prototype for Quikiks in 2007. His first move was to visit the local craft store in his New York City neighborhood, where he picked up some cardboard and magnets. Next, he bought a cheap pair of sneakers from Walmart. He went home, cut them open and made alterations with his craft supplies. Later, he'd add more parts that he 3-D printed himself.

For six months, with Alex's encouragement, the stay-at-home dad handcrafted one crude "Frankenstein shoe model" after another.

The goal wasn't to create a functional pair of stylish slip-on shoes for his son. The bar he wanted to clear was higher than that: create an attractive, "non-orthopedic-looking" pair of rubber-soled sneakers that not only boosted Alex's confidence, but looked pretty cool, too.

Next steps
After building his first working prototype, Steve began to see its potential to become a real, mass-market product. With an eye on the future, he met with an industrial designer. Together, they worked to refine the original model. Meanwhile, Steve was introduced to Marty Sokoloff, a local wholesale grocery store owner and angel investor, through a friend. Sokoloff invested $50,000 into what was quickly becoming a business. With Sokoloff as his co-founder and backer, Steve officially launched Hands-Free, the company behind Quikiks, in February 2010.

As Steve worked to jumpstart the company -- securing design patents, attending medical device trade shows, and partnering with a reliable manufacturer -- his son turned a corner and no longer needed to wear a back brace.

Now a young man of 21, this means he also no longer needs his father's invention.

"Still, I'm not giving up," Steve says. "I'm pushing forward with a product that could help kids like Alex and a lot of other people with medical and cognitive challenges."

Quikiks aren't only for those suffering with back problems. Steve says they're also a good fit for senior citizens and obese individuals with limited mobility, hand and arm amputees, stroke victims and those suffering from debilitating arthritis, cerebral palsy, multiple sclerosis, severe autism and Parkinson's disease.

In July of last year, after seven "long, excruciating, difficult" years of trial and error fighting to bring his "crazy shoes" to market, Steve completed his first production run. At last, thanks to a successful partnership with a small factory in Mexico, the accidental entrepreneur has a sellable product in his hands.

His next challenge is to broaden his customer base and become profitable. Slowly but surely, while continuing to care for Alex full-time, he's making progress, selling Quikiks for $250 a pair on his website and at a few doctor's offices and specialty shoe stores.

This past December, Steve was named the grand prize winner of Entrepreneur and Canon USA's Project Grow Challenge. Following a speech that moved many in the crowd to tears, he accepted the $25,000 award at Entrepreneur's recent GrowthCon event in Long Beach, Calif.

He says he plans to use the winnings to invest in product improvements, market to more healthcare providers and to book more trade shows in the hopes of recruiting additional resellers and distributors. He might even hire his first employee.

For now, though, he's happy getting by with his wife Masako's help and Alex's, too.

"Alex was the inspiration for this journey in the first place," he says. "Even though he's out of that brace and doesn't need Dad's crazy shoes anymore, I look forward to working together with him so we can help a lot of others who still do."