Time-wasting meetings get a bad rap among some office workers (including Elon Musk), but there's no denying that taking time out of your day to nurture business relationships can be beneficial to entrepreneurs. Setting aside time to meet with clients visiting from out of town or to show a loyal client that you appreciate them is an easy way to deepen those connections.

But not all clients are the same, and when they might want to meet could actually depend on where they live in the United States. Meeting scheduling company Doodle looked at nearly 200,000 meetings across 135 territories from September 2018 to August 2019 to see if it could find some commonalities among when people choose to meet. The results contain some interesting tidbits. In big cities, dinner meetings are the norm. In the South, people prefer to do business over lunch. And the least popular time of day to schedule a meeting? To any early bird's dismay, people really don't like breakfast meetings. Take a look at these three graphics to learn more about the regional breakdown. 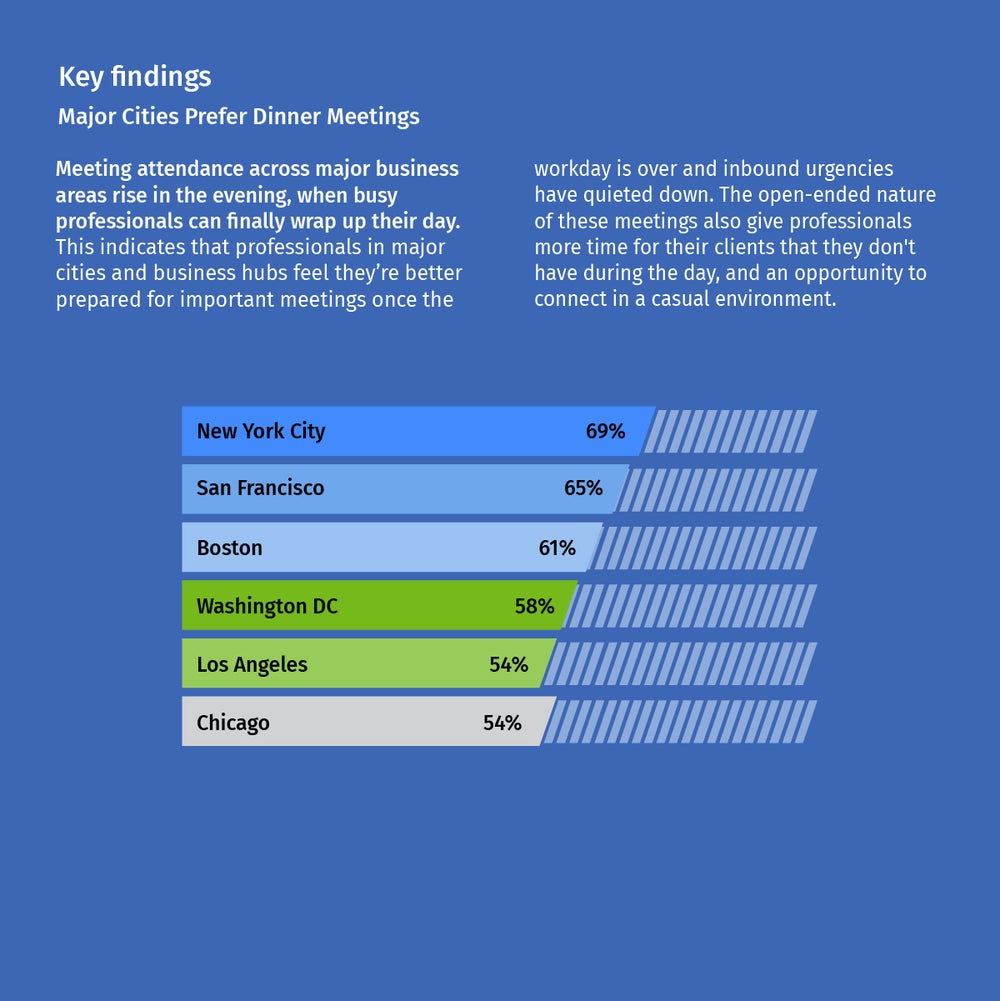 Big cities such as New York, San Francisco and Washington, D.C. overwhelmingly prefer to schedule evening meetings. The stereotype that people in big cities tend to adopt a "work hard, play hard" mentality apparently rings true. People in those cities prefer to get their work done then blow off steam instead of taking time out of their workdays to meet over a meal. At 69 percent, New Yorkers have the highest number of people who prefer dinner meetings. 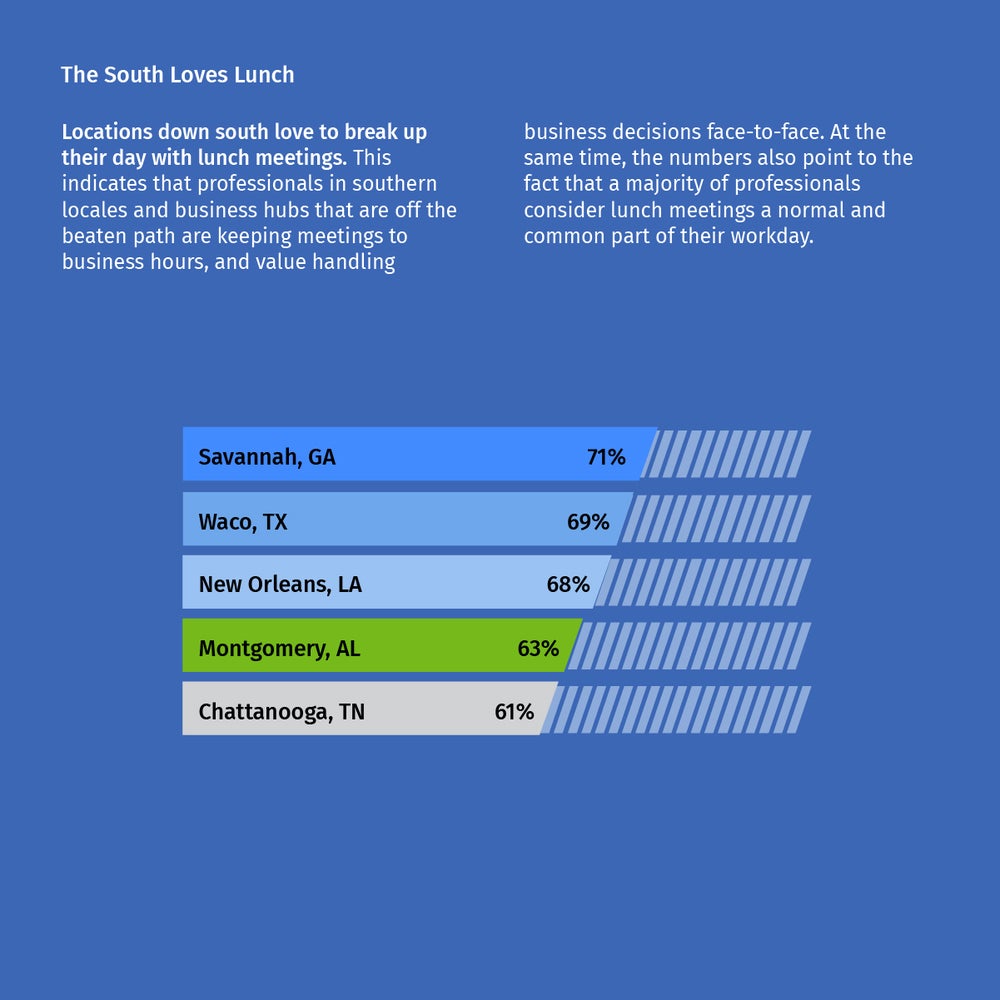 One stereotype about people from the South is that business is done based more on trust and personal relationships than in other parts of the country, so it's not too big of a surprise that people who prefer lunch meetings tend to be from southern cities. In Savannah, Ga. and Waco, Texas, around 70 percent of people opt for a lunch meeting over other options. 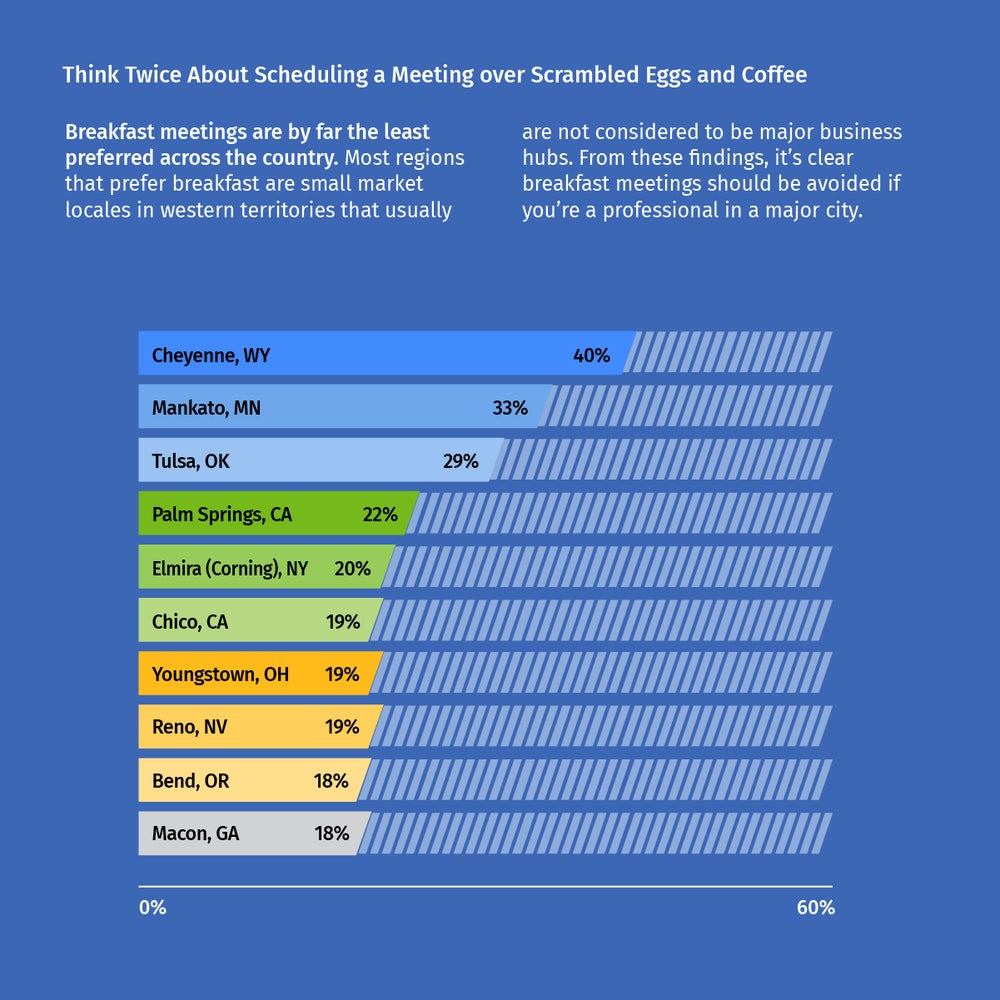 Breakfast meetings aren't a favorite in any of the large metro areas Doodle studied, and even in cities where they were popular it wasn't by an overwhelming majority. Cheyenne, Wy., at 40 percent, scored highest among people who most like to schedule early morning meetings.

The moral of the story? Think twice when you're traveling to another part of the country for a meeting with a client — and always offer them a choice between breakfast, lunch and dinner.