Sara Horowitz, also the founder of Freelancers Union, explains why a safety net for freelancers starts with her new company, Trupo.

If you're a freelancer, you don't get days off when you're sick. While you may be able to save up a rainy day fund for the occasional flu, if anything ever happened to you that put you out of commission for weeks at a time, chances are you'd be screwed.

For freelancers who have experienced this misfortune firsthand -- or who live their lives trying not to think about the possibility -- a new kind of insurance will soon become available. A company called Trupo, formed out of the Freelancers Union by the organization's founder, Sara Horowitz, will begin selling short-term disability insurance to a waiting list of more than 200 Georgia residents later this month, with a broader launch and additional markets to follow.

Most people who participate will pay in between $27 and $51 a month and receive an average of $500 per week in the case of serious illness or injury. Several factors come into play, however, from the physical activity required of that person's work to the amount of income they earn. People are only eligible to receive 50 percent of their weekly income (capped at $1,000), for between one and 12 weeks.

Freelancers may not know what their income will be from one week, month or year to the next, and Trupo doesn't expect them to. Those seeking a quote on the website will see the following reassuring message: "We know it fluctuates depending on what's going on with your clients and the economy and possibly certain astrological events, but just give us a reasonable ballpark."

It's up to the freelancer: How much do they want to pay in, and how much do they think they'll need in weekly compensation in case they need to reap the benefit? They can toggle a slider to see how their coverage will change the more or less they pay in. The user interface applies the simplicity of today's most popular digital services to buying insurance, a traditionally harder-to-navigate industry. (Think: how you plug in your points A and B into a ride-hailing app and get a quote immediately.)

God forbid a serious illness or injury plagues the freelancer. In that case, they file a claim. Things such as "hangovers, hangnails and bad hair days" are not covered, the website clearly states, nor are pregnancy, short-term bugs or dangerous behavior.

Trupo, however, is about more than money. In Horowitz's view, it's empowering for workers to be part of a group of people who share their best interests. To that end, part of the Trupo sign-up process, in addition to asking a bit about work and health history, is a "solidary pledge." 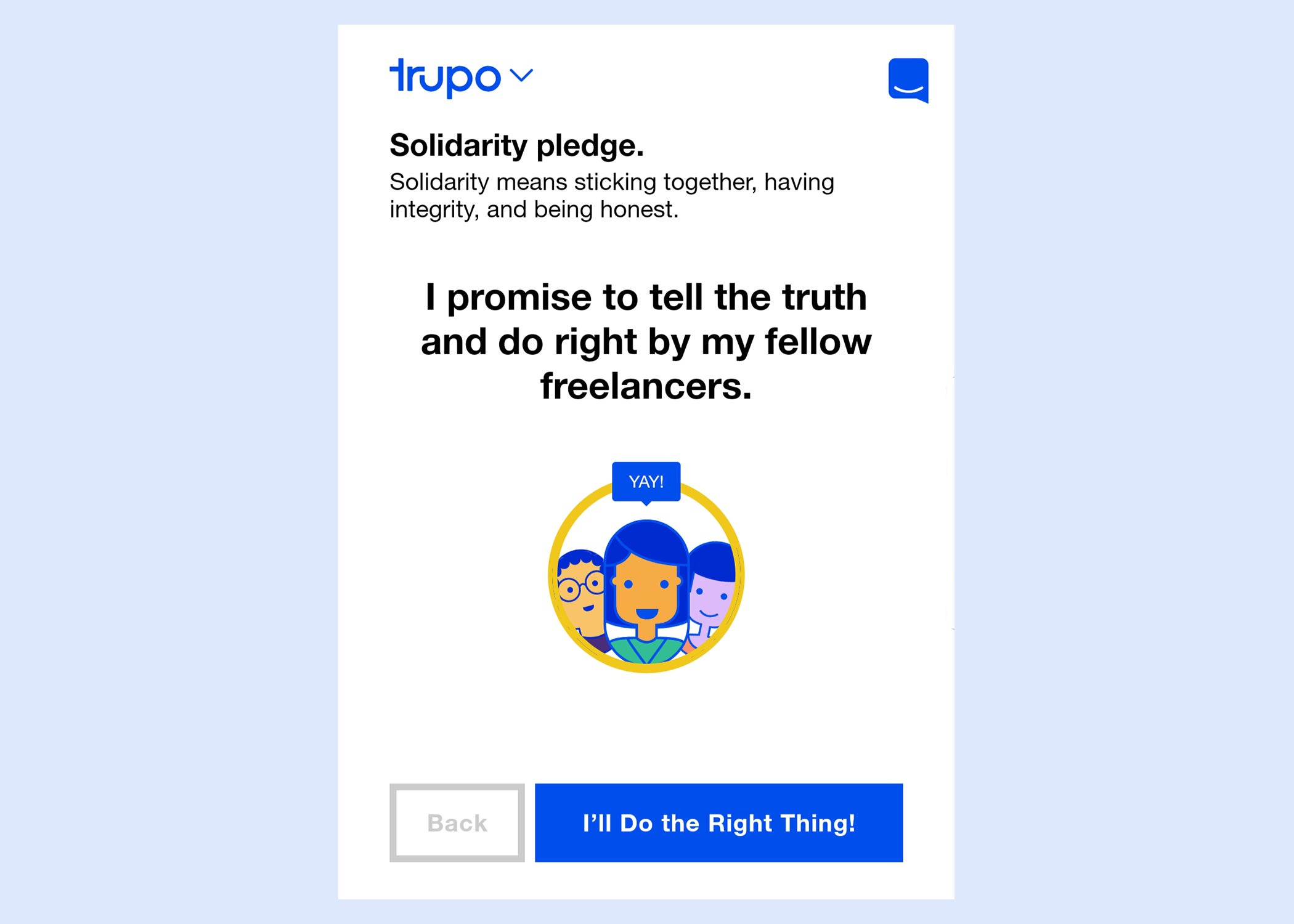 "We're a country of people who feel alone and can feel anxiety," Horowitz said. "When you're in a group, you have somebody who's helping you curate and figure things out because you can't do it on your own."

Horowitz spoke with Entrepreneur about why and how Trupo is tackling short-term disability, the types of workers who have the most to gain by organizing and what a worker-focused future might look like.

How did Trupo come out of the Freelancers Union?
The risk for freelancers, while it has always been about episodic income, is rough right now. In particular, when something happens like a really bad injury or illness, freelancers, of course, aren't eligible for unemployment insurance. They go into credit card debt, or personal bankruptcy or have to give up independence and move in back with family.

When we started listening to that, we said, wait a minute. There is a way we can probably start to collectivize this risk and solve this problem -- which is what Freelancers Union has always done, particularly around health insurance.

It became clear that there was not going to be foundation money or government initiative. The only way we were going to get this started is if we made it a for-profit and took it out of the Freelancers Union. Freelancers Union was like our Y Combinator and helped incubate it and bring it to life. Then the senior insurance team, five of us, left and built Trupo. Now, Freelancers Union is a 10 percent owner.

I understand that the Affordable Care Act presented some obstacles for the health insurance that the Freelancers Union previously worked to provide.
We had built the Freelancers Insurance Company, a $100 million company that reached 27,000 people in New York. After the ACA, the actuarial rules changed. Freelancers Union, which is a nonprofit, wholly owned the insurance company, which was a for-profit. Our actuary told us that we would have to pay between $35 million and $55 million after the ACA if the insurance company was going to survive. We said, there's not $35 million to $55 million of nonprofit capital out there. We knew we had to wind it down, which is what we did.

Was short-term disability insurance your next move in building a safety net for freelancers? Is it because it's less regulated?
Health insurance right now is in the middle of extreme volatility. There was no way that we could enter it right now in a way that's helpful at all. It also is about this pivot shift. We're going to need new things, new products, new approaches. Trupo is a completely new approach.

What type of workers is Trupo geared toward? Platform workers, like Uber drivers? Or people whose companies made them independent contractors instead of employees so they wouldn't have to give them benefits?
We have to recognize there are workers who are and should be employees. That's one category. But the people we're talking about, they're graphic designers, they're programmers, they're writers. They're skilled, and they very much see themselves as craftspeople. They don't want to be employees. They're working class and middle class.

There are few people in our society who don't work. And sometimes we're getting confused about that. In some ways, this freelance workforce gets lost in the political debate. There are some people who want to keep having the political discussions, and that's great, but we're just moving into action.

Has anyone expressed concern that people who self-select into Trupo insurance are maybe more likely to experience absence from work for illness or injury? Is that sort of risk something you have to mitigate?
One of the things that's fascinating about insurance is that it's all about setting the system so that you can make sure that it's sustainable over time. One of the major things about freelancers in general is, if they don't work, they don't eat. Trupo covers people at 50 percent of their income, which is a game changer for them. But as soon as they can get back to work, they're going to want to. They don't want to live on 50 percent of their income for too long.

The second is that, it's not like paid time off if you're not feeling well. It's about, you have a serious injury or a serious illness. But it's also 12 weeks -- it's a short-term product. You see the biggest kinds of abuse when people are going to need disability for decades. Ironically, the easier it is to sign up is a hedge against [abuse], because the people who really are using it as insurance should be used don't have barriers to entry.

Related: Netflix-Like Recommendations May Be in Store for Workplace Benefits

Do you think that platform workers, such as Uber drivers, should be employees of third-party companies to obtain benefits? Or does that create more middlemen and costs for workers to inevitably bear?
We're in a moment of, whatever's helpful, all good. But we have to protect workers' independence. There's a lot that's great about being an independent contractor, and people should be able to do that. What we shouldn't have are bigger platforms that just don't want to pay benefits.

There are different types of independent contractors, and they get mushed together. So you see people who think that they're being progressive saying, "Let's just make everybody an employee. Won't that be great?" But the truth is that it's oppressing freelancers.

There is nothing wrong with making people an independent contractor and paying them enough so that they can buy their benefits. If you can pick the kind of organization you want to get your benefits from, an organization that is 100 percent aligned with you, you feel solidarity with that organization. Getting any benefits from your employer is an accident of history, and people need to remember that.

There were great reasons to get benefits from an employer, and they came from the union movement, and we shouldn't forget that. We don't want to lose that. But we have to be thinking about, what are the unions going to be doing for the next era? Or what are the workers themselves going to be doing? Trupo believes you need to be in a group, and the group should be the one that's providing benefits.

Right now it might seem inevitable that workers are going organize more in the future, but how that will look in practice is still kind of vague.
Because it's a little messy, and it's a little vague, people cling to the past structures because they don't see what the future is yet, and the workers get caught in the middle. That's exactly where Trupo says, "Freelancers, you're not getting anything out of the past. Get over it. We are going to architect the future. And others can follow when they're ready."

But one thing that we have to get back to is a consciousness about our own institutions that have presidents, secretary-treasurers and a budget. That might sound bureaucratic, but it's actually the mechanism of democracy. Because once you have a way to come together, you start to build in leadership so that it can be multi-generational and start to build up knowledge over time. We have to build the civic infrastructure back into America that we have lost. People are yearning for it.