I Call B.S. on This Motivational Poster

A scan of the walls in Entrepreneur's New York office reveals some pretty cool and helpful stuff. Framed covers of Entrepreneur magazine show all of the incredible people we've interviewed over the years. Monitors display the constantly updating data that is critical to our digital operation. And an exit sign points us in the proper direction to go home.

But then there's this: 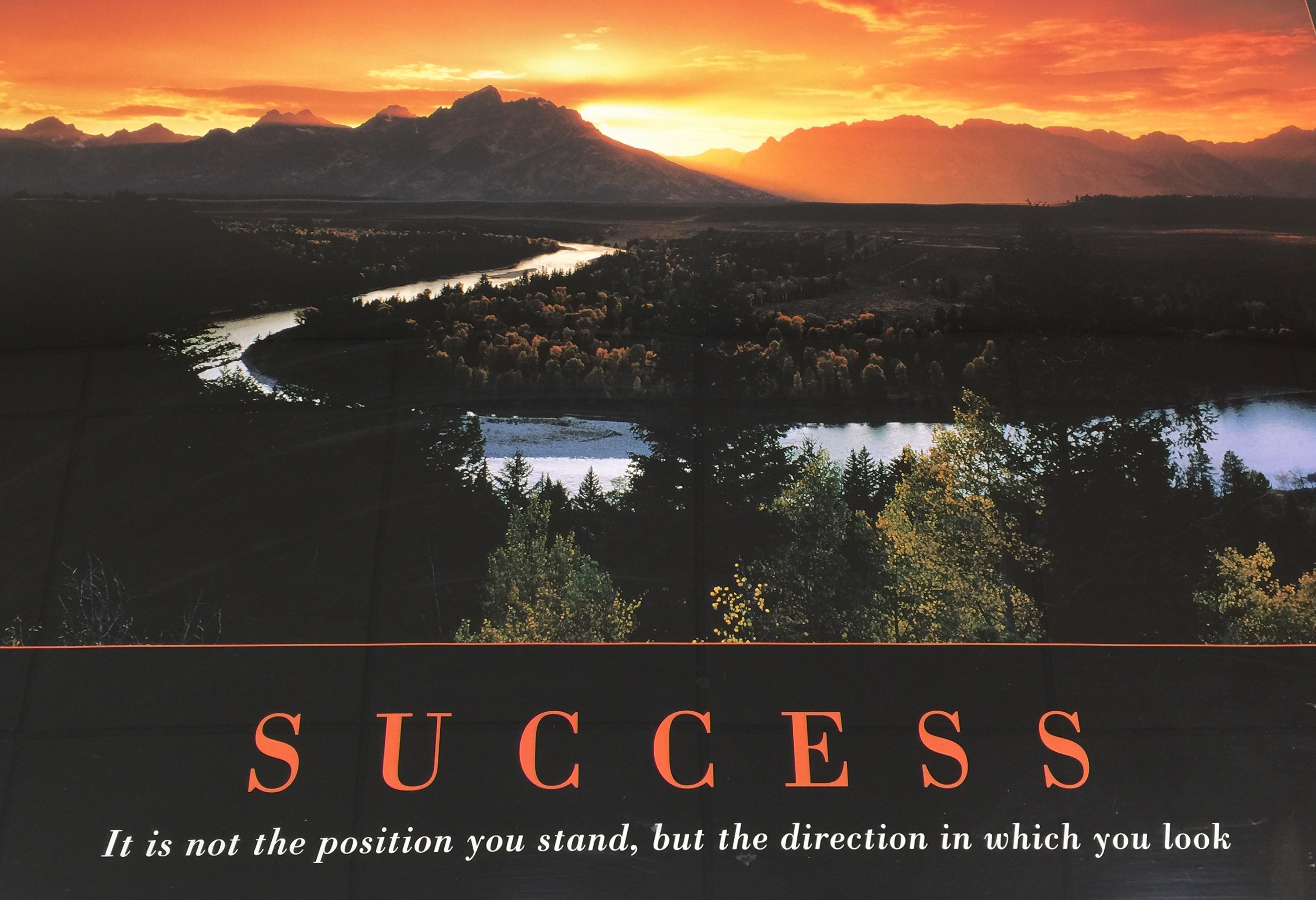 This poster hangs over our water cooler. No one knows where it came from or who hung it there. Some motivationally-minded elf apparently popped into our office one magical night, nailed it up and returned to his home dimension in a puff of smoke.

So this morning, while hydrating, I was staring at the poster for the 100,000th time and I was suddenly hit with a question: What the hell does that mean, anyway?

Success: It is not the position you stand, but the direction in which you look.

Doesn't your position directly affect which direction you can look? I mean, if you're facing north, maybe you can look a little east and a little west (if you didn't sleep in a funny position and have a stiff neck like I currently do.) But looking south? Sorry, unless you are the little girl from The Exorcist, looking directly behind you ain't going to happen. That is, of course, you turned yourself around thereby changing your position!

But leaving aside compasses, what if I was positioned at the bottom of this picture? Well, then I'd be looking directly into the trunk of a tree rather than an overly-retouched sunset. And how does that help anyone, poster?

I was filled with the urge to rip it down and burn it with one of the leftover birthday cake candles in our kitchen. But before committing to a minor act of arson, I decided to call the poster's maker, Pyramid America ("America's Premiere Source for Iconic Art & Posters") to see if they could explain what I was missing.

Me: Hi, I wanted to ask a question about one of your posters?

Me: The poster is about success. The poster claims that it is not the position you stand, but the direction in which you look.

Rep: Give me one second, I will look that up…that poster has been discontinued. I'm so sorry.

Me: Well, don't be too sorry. We have it hanging on a wall at my office and I was just wondering—do you know what it means?

Rep: Um, no idea. Tell me what it says again?

Me: "It is not the position you stand, but the direction in which you look."

Rep: Yeah, you're right. It was just a quote from somebody they put on a poster. I don't know what it means.

Me: Maybe that's why it is discontinued.

Validated in the "this doesn't make sense" department, I was intrigued by her thought that it could be a quote from "somebody." Who is this "somebody" going around slapping nonsensical sayings on cheesy pictures? Then I remembered: I'm a journalist and I could put my investigative experience to work to find the answer. (And with that, I typed the phrase from the poster into Google.)

Direct hit! Turns out the phrase was uttered once by "somebody" -- or at least some version of it was. The saying is a bastardization of a quote by formerly-living Acting Chief Justice of the Supreme Court Wendell Holmes, Jr. His quote, in part, reads, "Greatness is not in where we stand, but in what direction we are moving."

Now that makes sense. Mystery solved. And now that I've cracked this case, I am motivated to go out and uncover more truths.

(Wait a minute -- maybe this stupid poster worked after all? Oh, you're good, poster. You are good.)