The co-founder of The Assemblage was inspired to bring people together after partaking in the hallucinogenic drug.

Not to get too political here, but I think of individualism as both a symptom and a cause of many aspects of our global society. We're programmed to think the world revolves around us, or that we're each one-of-a-kind. We define ourselves by our own interests and accomplishments -- and sometimes what divides us -- rather than by the communities we belong to.

As I prepared to spend the day at The Assemblage, a 12-story shared workspace community in New York City, I came upon this description on its website:

"The Assemblage is a community of individuals who believe the world is at the verge of a collective conscious evolution, transitioning from a society defined by individualism and separation into one of interconnectedness."

That's an extremely optimistic view, to say the least.

I believe that the world would function a lot better if we could somehow shake this paradigm. But when The Assemblage says "the world is at the verge of a collective conscious evolution," I'm pretty cynical about the whole thing by comparison. What proof do they have that we're on this so-called "verge?"

Well, its co-founder was inspired after partaking in the hallucinogenic drug ayahuasca. Don't roll your eyes -- I don't mean to be flippant in sharing this detail. Rodrigo Niño was diagnosed with stage three melanoma at age 41, and when he got the news, he took a trip to Peru and consumed the hallucinogenic drink.

"What I saw from that perspective was that society today was not in very good shape," Niño told The New York Times. "What I saw, in this hallucination, was how all living things were connected as one, but we were not aware of it rationally."

It's an extremely intuitive concept, one I don't need empirical evidence or an ayahuasca trip to understand. We all belong to one ecosystem, called Earth. Look at it however you want -- scientifically, religiously, spiritually.

The ground floor of The Assemblage is a communal space for members.
Image Credit: Mikiko Kikuyama Photography

I've written a few articles about coworking spaces for Entrepreneur, usually related to business models, enterprise technology or design. But I'd never spent the whole day working in one until late last month, when I visited The Assemblage.

I'll come back to the idea of interconnectedness, but first, I'll share an overview of my day at the space, with the caveat that of course spending a day anywhere is different than spending weeks or months. You have to belong there as a member to fully reap the benefits of the community, forging relationships and taking full advantage of the space and its amenities, from meals to nighttime events.

Gongs and ayurvedic meals
I arrived at 9 a.m. and signed in to meet my host, a member who started as a freelancer working out of The Assemblage and quickly took on The Assemblage as a PR client. I found a seat as I waited for her to come down. She showed me four communal spaces. She also set me up with breakfast, explaining that all food served at The Assemblage is sourced within a 200-mile radius and suited for an ayurvedic diet (seasonal eating that balances the "six tastes" -- sweet, sour, salty, pungent, bitter and astringent -- to maintain physical, mental and emotional wellness).

Because I was unsure which ayurvedic foods would be optimal for me, I selected based on what sounded appetizing to me that morning: a triangle of sourdough toast, some scrambled eggs (cooked with ghee), a winter hash made up of carrots and celery and a cup of coffee. I skipped the spread of fixings at the end of the bar, mostly seeds and spices that I couldn't recognize. I settled in at one of the booths nearby -- I was treating this like a normal workday with a normal workload, so I had to buckle down. 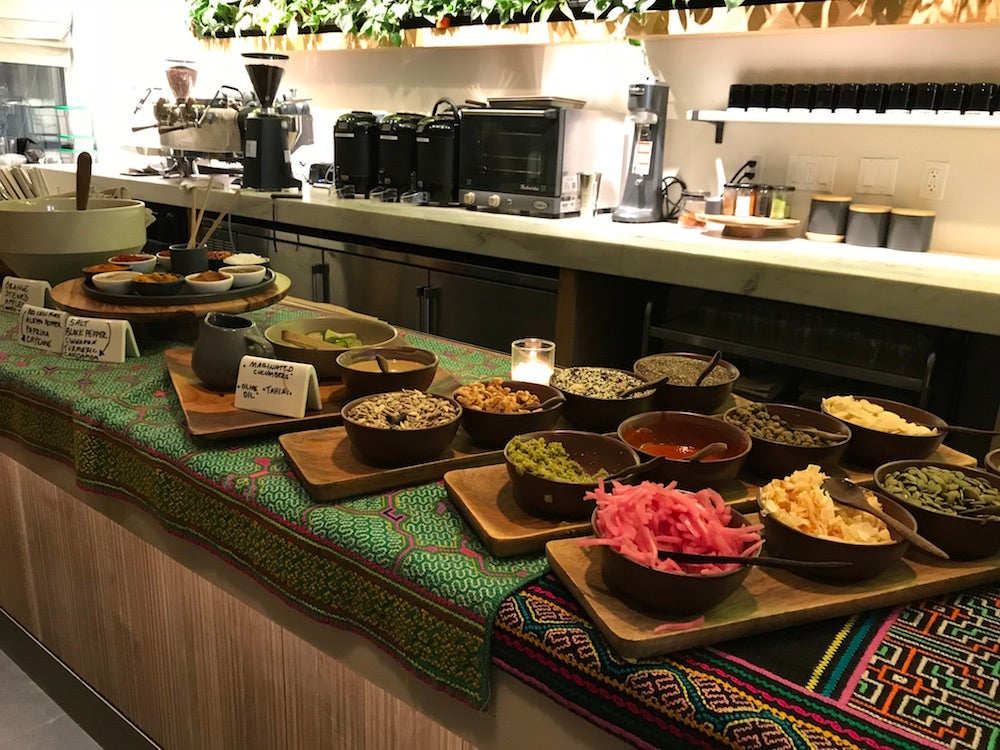 The ayurvedic fixings at The Assemblage.
Image Credit: Lydia Belanger

But then, about 20 minutes later, I heard a faint gong. Then I heard the gong again. "Is this to instill mindfulness of the passage of time?" I wondered. I became pretty consumed in my work and didn't notice it again, though I enjoyed the tranquil sounds. (Turns out, the gong I heard was a smartphone-programmable Gamelatron kinetic sculpture on the mezzanine level above.) I also felt calmed by the flicker of candles and the natural light -- features I don't usually associate with the work day. As a juxtaposition, I heard some guy tell someone that their pearls (or curls?) were "on fleek."

By 12:45, I left my things and joined a line of people who'd descended from throughout the 12 floors for lunch. I'd waited for the line to die down, but it was bustling throughout the noon hour.

Again, I didn't try to construct my plate based on my personal ayurvedic profile. One of the women working behind the counter expressed disappointment that the bowl of yellow turmeric-seasoned barley wasn't corn. I wondered if corn is part of an ayurvedic diet and thought it'd be hilariously off-brand if not (seems corn is OK). I had some of the barley, an herb-roasted chicken leg, broccoli with mustard vinaigrette, pickle slices, cranberry-apple cobbler for dessert and some citrus-infused water. 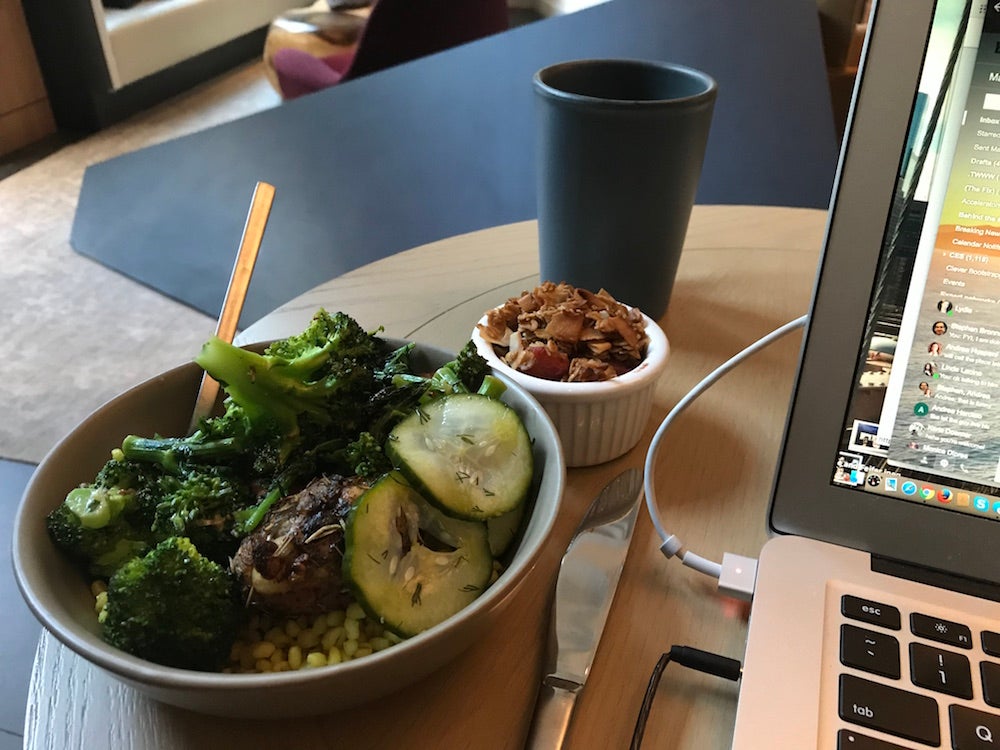 My ayurvedic lunch at The Assemblage.
Image Credit: Lydia Belanger

I watched as a group of four chose to eat on the floor around a coffee table made from a cross section of a tree trunk, two of them leaning their backs against the sectional couch they'd spent the morning working on, their laptops mounted on pillows.

Related: Let's Do Lunch: 4 Reasons You Should Sit and Eat With Your Employees

At 1:30, I had a scheduled tour with co-founder Magdalena Sartori. She pointed out the theme of biophilia throughout the space -- walls covered in living moss, or mounted with dried and painted mushrooms, or wallpaper covered in whimsical urban plants and animals (see photo below). She pointed out tapestries made by Peruvian women under the influence of ayusahaca, with motifs of interconnectedness. (I'll publish a full photo slideshow tour with more details next week.) 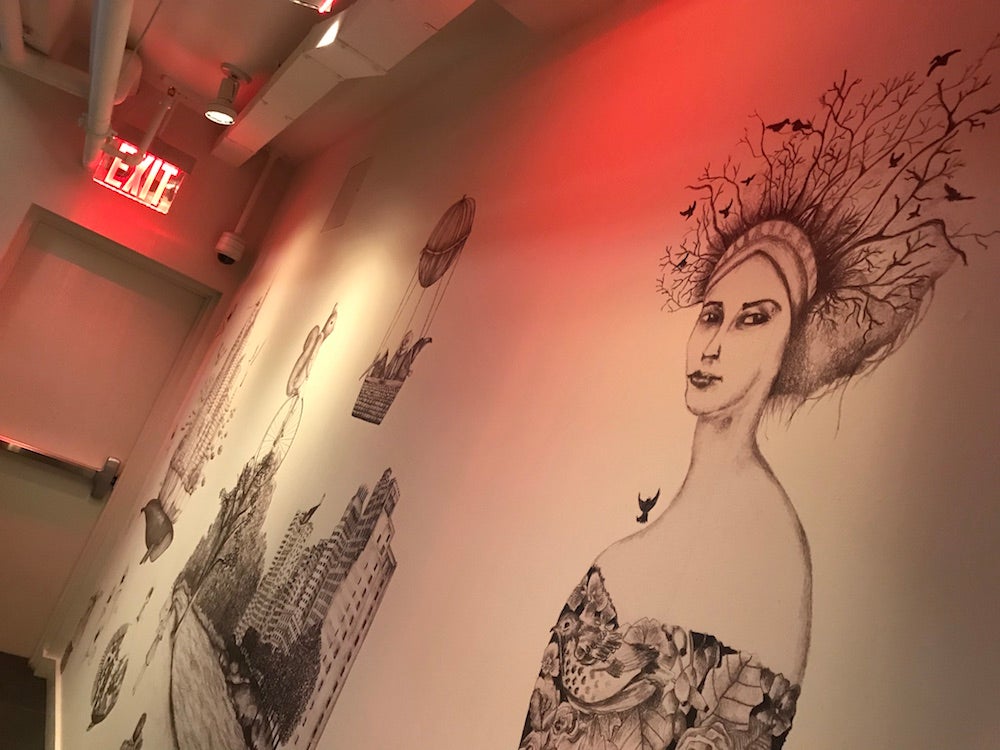 We ended our tour at the Alchemy Bar. The Assemblage doesn't serve alcohol, which may be a dealbreaker for anyone looking for beer or wine on tap at a coworking space. The menu read "Set your intention," with eight choices, including "Immunity," "Energy" and "Joy." I decided to try the elixir called "Brain" -- yes, I drank the Kool-Aid! No, I did not hallucinate.

The Brain's description read: "mental clarity, confidence + focus." Below that, "brain formulation (gotu kola, ginkgo, brahmi, rosemary), mct oil, cider noir tea, camu camu, acerola cherry." It tasted like apple cider, but not very sweet -- I liked it. I'm tempted to joke about how I wish it came with bourbon, but overall, I respect the absence of alcohol at The Assemblage. 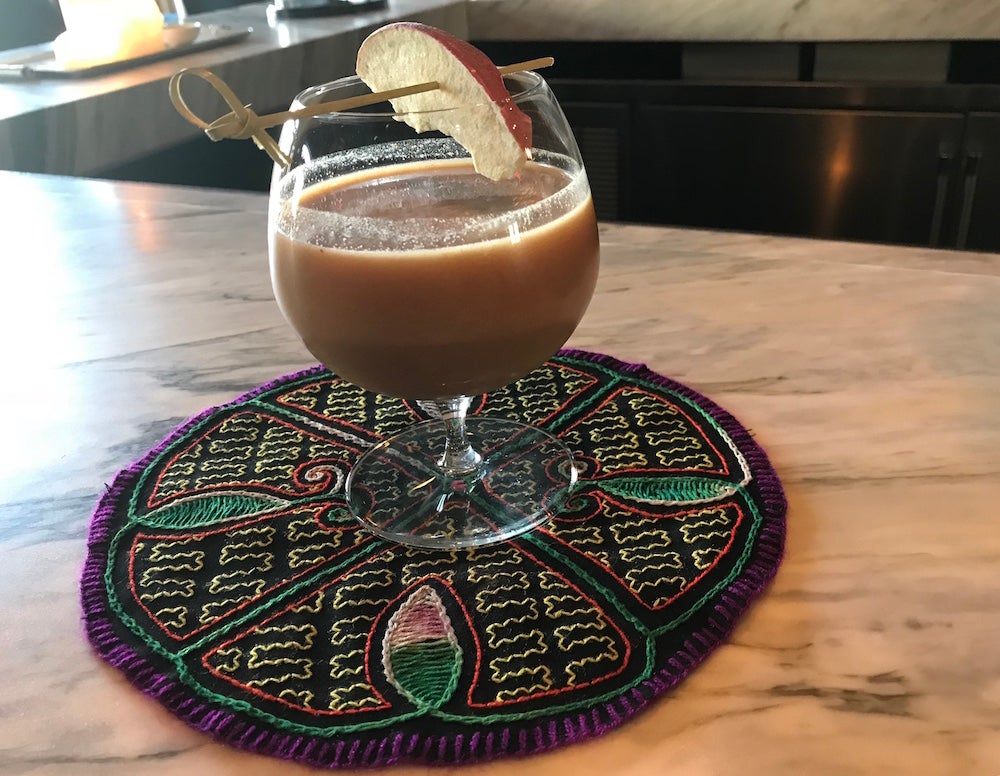 At one point, a woman came up to the counter and asked the bartender (alchemist?) to make her the drink called "Ground," whenever she had a moment.

"That's the yellow one," the alchemist warned.

"I meant Balance!" the woman replied. "Oh, you know me so well!"

It was heartening to see this sense of community play out.

Then it was 3 p.m.: time for the breathwork session, my last activity of the day. Aside from the fact that I hydrated a bit too much before committing to spending nearly an hour in the session, it was relaxing. Instructor Kathleen Booker was somehow simultaneously calm and high-energy -- it's probably most accurate to describe her as radiant. She kept calling us "beloved."

Eighteen of us lay on the floor on cushions and pillows in a tiny, underventilated room. Booker guided us verbally and came around to touch our foreheads or chests periodically. I imagined my breath like an infinity symbol, as one continuous loop. (Booker used the analogy of ocean waves.) When it was over, she insisted we take a selfie (see top of page) because of how many of us there were.

Connectivity through coworking
The Assemblage is a busy place. It's opening two additional Manhattan locations soon -- one right across Park Avenue from the NoMad location I visited on 25th Street, and another downtown on John Street (opening April 2), which will have a "coliving" hotel component. Given how crowded the current location's communal spaces were, it seems the expansion is needed. There's clearly a market for The Assemblage, though to call those who gravitate to The Assemblage a "market" doesn't feel very Assemblage-y.

But crowdedness isn't a bad thing in a community, per se. Earlier, I'd balked when a woman asked another woman if she could leave her laptop charging at her table, because of its proximity to an outlet. In a Starbucks, that'd be weird or unfortunate, but at The Assemblage, a place built around interconnectedness, what was wrong with it? 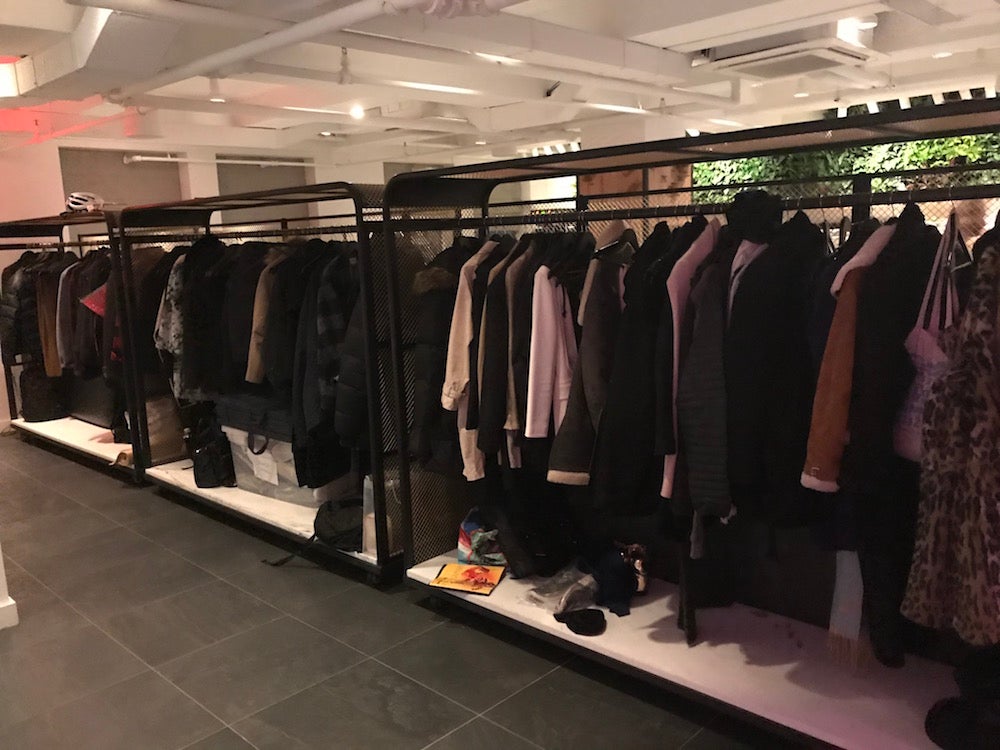 Full coat racks give a sense of how bustling the space is.
Image Credit: Lydia Belanger

In hindsight, I also think I expected people at the Assemblage to be visibly practicing a philosophy (other than Ayurveda). But I didn't feel like an outsider. I think that a daylong visit and a tour can give you a pretty good idea whether a coworking space might be a fit for you. If you're into spirituality, wellness and sustainability, The Assemblage might be a great option. You could go there and ignore the features designed toward those values and simply eat some scrambled eggs and sit in a nice chair with your headphones on, but why would you pay a monthly fee, starting at $900 for a flexible desk, if you weren't going to fully participate?

I can't help but wonder though, how can communities like this bring us closer, unless we all belong to the same one? How can The Assemblage reconcile messages of interconnectedness and universality with the fact that some people, inevitably, aren't going to think The Assemblage is the right space for them? Is it just that they aren't rationally aware of their earthly needs, just like I don't know what my ayurvedic diet profile is?

My advice is, if you're going to join a community, go all in. Drink the elixir.

Related video: Daymond John: Do This Before Selecting a Coworking Space