By Carol Tice
January 11, 2010
Opinions expressed by Entrepreneur contributors are their own. 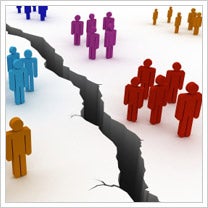 No issue has polarized the small-business community in recent years like healthcare reform. With Congress back in session, all eyes will be on the lawmakers tackling the daunting task of reconciling the House and Senate versions of the healthcare reform bill.
Change won't come fast enough to help small businesses caught in the buzz-saw of steep premium hikes that hit the sector for 2010. But change is likely coming. Will it help small businesses, or will it hurt them?
One of the most vocal groups opposed to healthcare reform is the National Federation of Independent Business, which says 94 percent of their members are against the idea of a mandated payroll tax for businesses that don't offer employees healthcare.
For healthcare reform but opposed to the current legislation, especially the House's "public option" language is the U.S. Chamber of Commerce, calling the current bills' mandates "counterproductive" and saying they fail to address the root problem: rising healthcare costs.
More strongly pro-reform is Build a Stronger America, a newly formed group spawned by the Ewing Marion Kauffman Foundation. BSA lists the need for healthcare reform as one of its founding tenets.
Views have differed so greatly in the community that the Wall Street Journal recently ran a pro-and-con article with a business owner on each side of the debate airing their views. I thought that summed up the situation--it's a big split out there.
The New York Times' Robb Mandelbaum, in his You're the Boss small-business blog, notes there are key differences in the Senate and House bills, so the reconciliation process will be interesting to watch. The Senate bill is considered easier on small businesses and insurers, while the House bill with its public option is more in line with the original intent of healthcare reform.
Will the public option stay or go? Comments to previous blogs here on the Daily Dose have indicated some business owners would like to see healthcare unhooked from employment, and want the public option, while others hate the idea.
What would you like to see in the reconciled healthcare reform bill? Or would you prefer no bill at all? Make your case in the comments below.