National Entrepreneurs' Day -- Will You Celebrate, or Cry? 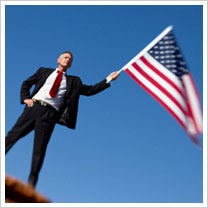 Recently, I wrote about the emergence of several entrepreneurs' movements around the country. One was an initiative to gain federal recognition of Nov. 19 as National Entrepreneurs' Day.

Update: They did it. Thanks in part to a robust Twitter campaign spearheaded by marketing and technology firm the Grasshopper Group, President Barack Obama has signed off on it, and today is the first-ever National Entrepreneurs' Day.

The question is, does that news make you happy, or angry? Let's face it -- many entrepreneurs are upset with the current administration for what's widely viewed as a maddeningly slow effort to help small businesses through the downturn. While banks and big automakers got gigantic bailouts, small businesses waited -- and waited -- for a little of the assistance to trickle down to them.

Programs the feds did try, such as the Small Business Administration's ill-fated ARC loan program and the bank-bailout funding, didn't help small businesses the way lawmakers had hoped. Banks didn't lend. More recently, business credit cards were left out of the CARD Act, and interest rates on company cards soared.

So business owners are probably justified if they feel it's a little ironic that the White House has now recognized them with...a day. Many entrepreneurs I know would probably rather have a usable line of credit.

But if you're happy to see entrepreneurs finally get some official recognition and you're looking to make the day special, there are many events planned. National Entrepreneurs' Day concludes Global Entrepreneurship Week, which has 25,000 events going worldwide.

Today's activities include a business-plan competition in Oklahoma and a networking lunch for student and faculty entrepreneurs in Winston-Salem, NC. The 5th Annual Astia Awards will be handed out in San Francisco, honoring women business owners. The list goes on.

This year's designation was a pretty last-minute affair, so there wasn't time to launch a marketing campaign and spread the word. Next year, I'm envisioning businesses across America with big "National Entrepreneurs' Day" stickers on their storefronts, both brick and virtual. Maybe a Web campaign. TV ads even.

Main streets could organize celebrations that might bring shoppers to patronize their businesses. Lots of potential for it we'll hopefully start to tap next time around.

For this year, it's a great day to thank a mentor, or maybe be a mentor to a young entrepreneur trying to get their business off the ground.

What's your reaction to the designation of Nov. 19 as National Entrepreneurs' Day? Leave a comment and let us know your views.