Prepare for a Massive Recession

By Grant Cardone
April 14, 2016
Opinions expressed by Entrepreneur contributors are their own.

It's been eight years since the 2008 recession. I believe we are in a massive recession right now but the media can't call it that because by definition we aren't there yet. A Recession is defined as a period of temporary economic decline during which trade and industrial activity are reduced, generally identified by a fall in GDP in two successive quarters. By the time the media calls it a recession it's already too late—it will be after the fact and you have already been affected.

Bob Doll, chief equity strategist at Nuveen Asset Management, said financial markets are pricing at a 50 percent chance of recession. Again, this is about the overall economy when in reality millions of people in America are already experiencing a recession.

The oil and gas sector has been hammered hard which will cause tremendous damage to the banks. Already the oil and gas industry has laid off some 250,000 jobs worldwide. These high paying jobs effect everything. Growth in building permits and housing has pulled back, and manufacturing activity continues to contract. Home ownership is at the lowest levels in fifty years.

Automotive indicators show a consumer that is weakening, with auto buyers having to extend terms of finance to 84 months for consumers to afford a car. Incentives provided by the manufacturer are at the highest levels ever in order to continue to sell cars. A super daunting report by The WSJ recently suggested subprime automotive debt delinquencies (late payments) had spiked to almost double. 87 percent of the S&P 500 reporting, (total blended fourth-quarter earnings) have shown a decline of 3.6 percent, according to FactSet. Assuming the trend holds up, it will mark the first time profits have fallen for three straight quarters since 2009. But the stock market is almost double what it had declined to in 2008.

I have personally underwritten 57 real estate deals and had to walk away from them because they are all priced for perfection. Meaning they were too expensive for me to purchase. Talk to the everyday American consumer and you will find out they are strapped. And remember two-thirds of the entire economic activity rests on the shoulders of the consumer.

Then there are wages according to the Census ACS survey, where median income in America in 2016 is 53k, down from 56k in 2005. Notice the graph below and you will see it is flat or slightly falling. No big deal right?

You would assume that this will improve over time but the reality is if you look back to 1965 you will see real wages (adjusted for inflation) are flat, suggesting the income in America will not improve. 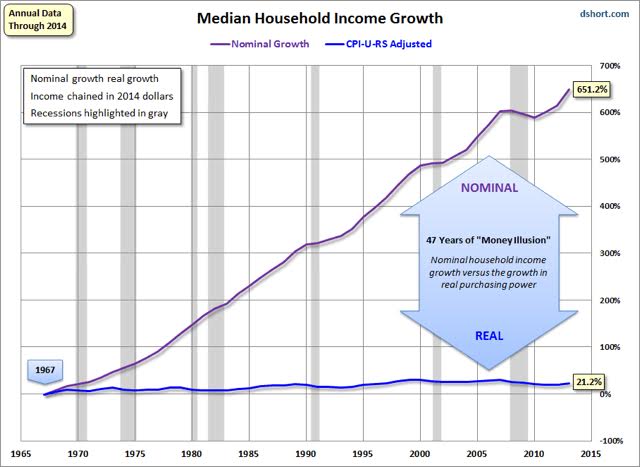 Politicians talk about minimum wage constantly but the real problem they never confront is median wage. They don't confront it because they can't fix it. Americans must learn how to make more money and that requires either specific high paying skills or an entrepreneurial approach to wages.

Related: 5 Ways to Make Enough Side Money to Eventually Quit Your Job

So what do you do to prepare for the recessions? How can you survive and even prosper from a monster recession? Contractions are not something to be scared of but rather opportunities for those properly prepared for them. Here are 5 things to keep in mind:

1) Don't wait for it to get here operate like it is here now. Out work everyone now as though the contraction is fully here.
2) Stop ALL spending except on those things that can increase income. Do NOT spend to consume; spend only to increase income.
3) Keep your firewood dry and add to it. Accumulate cash—wood for your fire—at all cost and spend nothing, preparing to invest when real assets get cheaper (they will). Prepare to steal when the market capitulates (throws up). Build your fire so big others stare in amazement.
4) Do whatever it takes to increase income. Take on other income opportunities to increase your monthly income and save it all.
5) Learn 'how' think rather than 'why' think and act like an entrepreneur. That means sales, marketing, negotiating, follow up, and branding.

The reason I created CardoneU was to provide individuals with entrepreneurial skills so they could survive and prosper during all times. Check it out today so you'll be ready for tomorrow.