By Carol Tice
January 28, 2010
Opinions expressed by Entrepreneur contributors are their own. 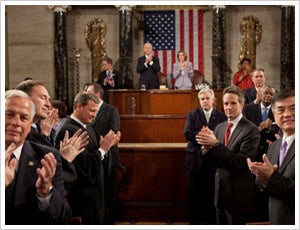 Small-business owners had to be happy to see President Barack Obama devote much of the front half of his State of the Union Address last night to jobs and the concerns of entrepreneurs. But will it translate into action? And are the proposals enough?

The International Franchise Association fired off a press release about it this morning that may sum up much of the reaction from small-business owners: It was titled "President's Job Proposals are a Good Start, But More is Needed." IFA applauded Obama's request to Congress for new, targeted tax relief for small businesses, especially incentives for hiring new workers or giving existing employees raises. Thumbs-up also to the proposal to make investment in small-business tax-free.

At the same time, the association would like to see more financial help for its members, whom it says will be shorted $3.4 billion in lending this year under current rules, translating to 134,000 lost jobs. The President's proposal to divert $30 billion of repaid TARP funds to community banks for small-business lending is good, but IFA wants the SBA 7(a) loan limit raised from $2 million to $5 million.

Oh, and on healthcare reform--IFA would like to see the current bill torn up and the process started over.
Not all small business organizations are happy with the TARP plan, either -- the National Federation of Independent Business opposes that $30 billion TARP plan. NFIB leaders aren't convinced the funds would be used as promised.

The business-owner-on-the-street reaction was a bit different. Out in Westerly, Rhode Island, owner Mark Gordon of Three Bean Studios web development liked the $30 billion small-business lending initiative, as well as the focus on deficit reduction.

Gordon was upbeat about the current healthcare-reform bill, saying, "I applaud the President for encouraging the two sides to come together to get something done. The number of uninsured Americans is a scandal, and escalating costs are crushing families and businesses."

What's your reaction to the State of the Union speech? Will it be more rhetoric without action, or the start of some real, concrete help for small business? Weigh in with a comment and let us know.