Screenshots circulating on the platform may be giving some users a run for their money.

Most people understand the basics of pyramid schemes: participants recruit new investors, ad infinitum, but since there aren't an infinite number of people willing to join, eventually, someone will lose out. When you add the layer of social media between participants, which enables anonymity and fosters a potential sense of false trust, the terrible consequences of these scams are heightened.

That's why it's troubling to see screenshots taken from Snapchat and other social networks (like the one below) circulating online, outlining what appear to be pyramid schemes framed as "crowdfunding" or "money pools," many promising that there are "no scams" involved.

The defining feature of these campaigns, if you will, is that they lure new participants to send a sum of money to someone via Snap's peer-to-peer payment service, Snapcash, or via another service such as Venmo. From there, that individual purportedly enters into a hierarchy through which the process repeats itself: That individual recruits more people to pay in and reaps the profits from everyone nested under them.

Indicators of this type of activity on Snapchat have been shared by users on third-party sites such as Reddit and Facebook, as the The Outline reports. Snapchat is a more private social environment where users tend to share images and videos in closed networks -- for a maximum of 24 hours before they disappear. From the screenshots that have surfaced, it seems those making the rounds on Snapchat involve only the exchange of money, not products or services. 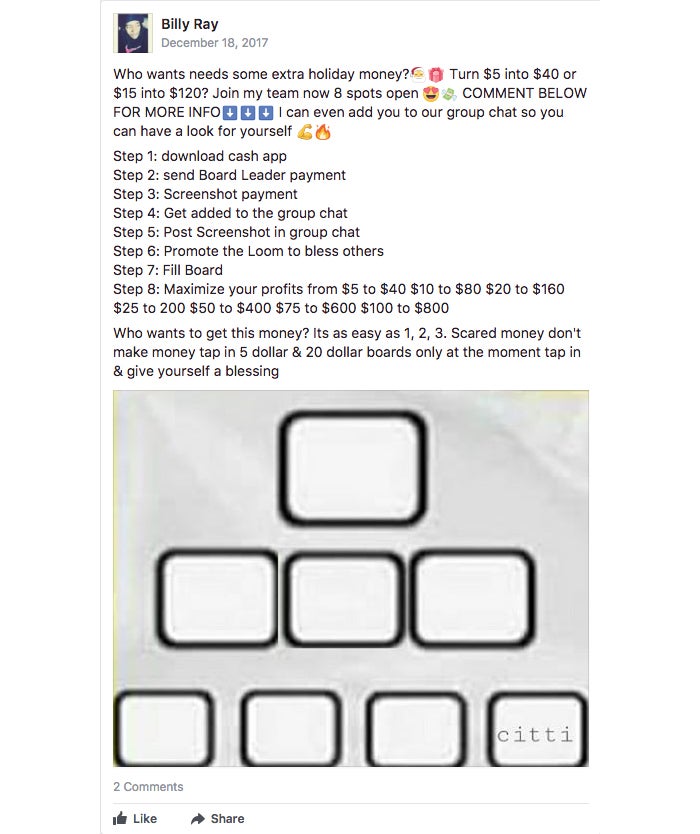 Similar potential scams have made the rounds in recent weeks, including a "gift exchange" pyramid scheme pegged to the holiday season. The Better Business Bureau issued a warning about this along with tips to keep people safe from being defrauded -- mainly, be skeptical, and report anything suspicious.

The big question is whether Snapchat's chiefly young, heavily gen Z user base is savvy enough to sniff out shady schemes on a platform known for the exchange of intimate content among friends.

It's difficult to tell the extent to which Snapchat users are actually participating in these schemes, vs. simply sharing information about them. Entrepreneur has reached out to Snap, Inc. for comment and will update this story if it responds.

Related: Scam or Superior Product? How One Entrepreneur Dealt With Scandal After Early Success.