Revealed: The Man Behind the Most Viral GIF in Politics

He gave us what is arguably the most famous dumpster fire in the world. But why?

If you logged on to Twitter at all during the 2016 election, you'd have seen this gif of a dumpster fire.

Donald Trump's feud with the Khans makes no sense. Like, none. https://t.co/rWIGMvzYiT pic.twitter.com/v2oMK1hPrR

Pretty much every political reporter you love (or hate) tweeted it whenever something happened worth comparing to a dumpster fire -- which, let's face it, was basically all the time. Before election day, according to the gif-making company Giphy, it had been viewed more than 10 million times.

But there was an open question: Who filmed that dumpster fire? What person actually came upon a raging dumpster in the real world, then raised a camera to capture its hot glory? Until recently, nobody knew. But now, in an Entrepreneur exclusive sure to ignite flames from Hollywood to Washington D.C., we can reveal this now-legendary cameraman's name.

Related: The Origin of the Internet's Most Famous Dumpster Fire

He is Harry Garvin. You may have seen his other work: He was a camera operator on Anchorman, Star Wars: The Force Awakens, Silicon Valley, Master and Commander and many Hollywood hits. And until recently, he had no idea that his dumpster video had gone viral.

How did it happen? First, some quick backstory: In October, 2016, after seeing that raging dumpster show up on my Twitter feed for months, I wondered if I could track down its origin. After some sleuthing, I discovered that the dumpster was actually in the back of Los Angeles's Dolby Theater, a venue most famous as the home of the Oscars. However, nobody from the theater or the Los Angeles Fire Department would talk to me. The path went cold, and I published what I'd learned.

Then last month, in May of 2017, I got a surprising email from a guy named Harry Garvin. "I shot the dumpster fire video," he wrote. "I had no idea it became such GIF sensation until today." The fire occurred on July 19, 2012; he'd filmed it and posted it to YouTube, mostly because he was toying around with some new camera equipment and wanted to see how it looked. And there it sat, unnoticed for years, until someone came along and made a gif out of it.

Garvin offered to send me a one-of-a-kind framed print of the fire, which of course I instantly bragged about to everyone in the Entrepreneur office. It's now hanging on my office wall. 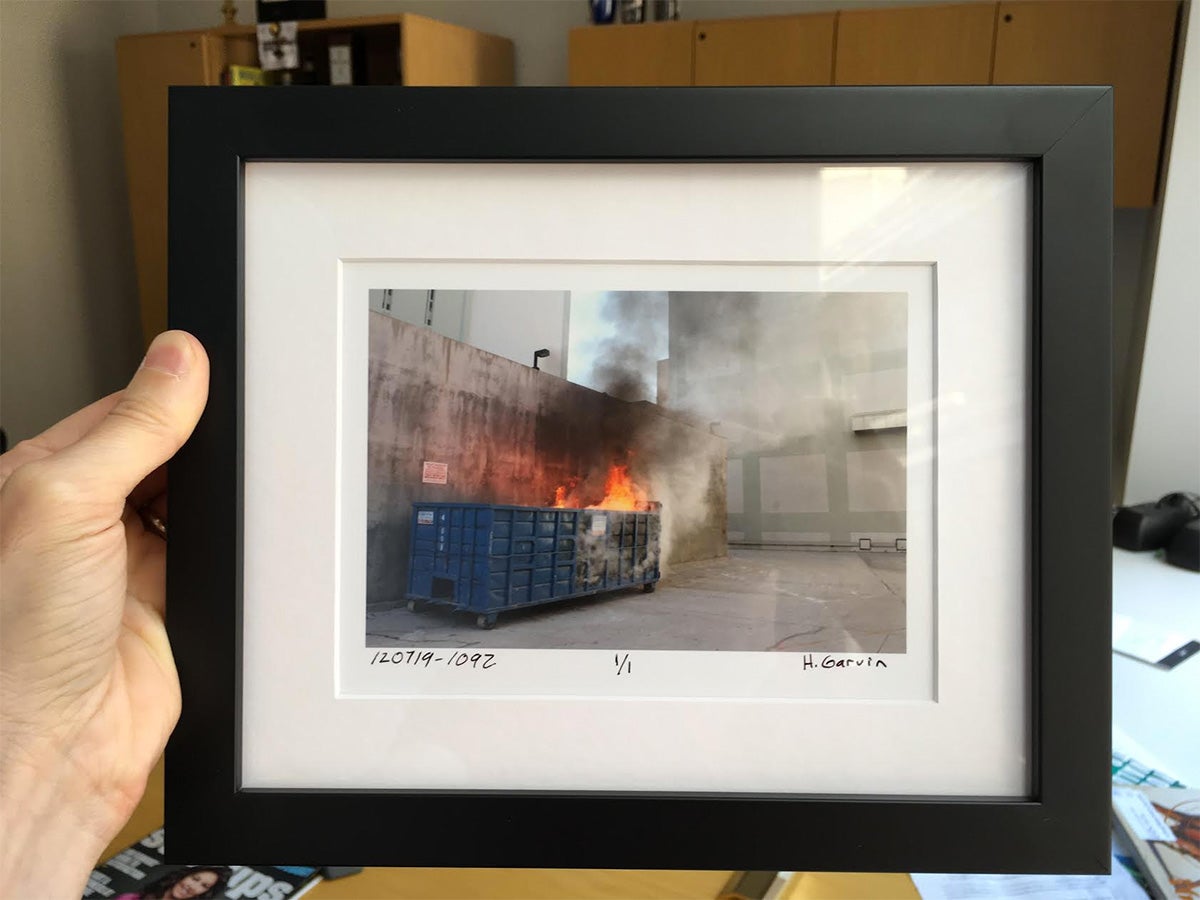 But I still had so many questions. So I got Garvin on the phone.

Explain this to me: You didn't know your video had gone viral until your wife alerted you to it?

Yeah. She sent me the image as an example of the term "dumpster fire," to express her consternation over an aspect of the Trump administration. And when she sent it to me, I was surprised. I didn't know how she'd gotten the video. I said, "I took that video. How did you get that?" She said, "You didn't take that video." And I said, "Yeah, I took that video." And she said, "Oh my God, that video is all over the internet," and that's when I began doing my research on finding out that it was all over the internet, which led me to you.

How did you feel when you discovered that you've gone viral and didn't know it?

I've taken probably 20,000 images for the fire department that are much more visually interesting than a garbage dumpster fire. So I was surprised. Very surprised, actually.

Let's talk about what you're doing with the LAFD to begin with. Your main profession is working on TV and movies, right?

Correct. I moved out to Los Angeles 1987 from South Carolina because I was obsessed with the film business and cinematography. So I started out as a camera assistant and began working my way up. But also, I had a big interest in war photography. I wanted to find something that was similar and explore it. So I went to the L.A. fire department to ask if I could do a project, which, after a bureaucratic nightmare, I eventually made a short film at a fire station in downtown Los Angeles in 1993 and '94. After that, people in the department would call me to say, "hey, we're having a training session, could you come and take pictures of it?" So I helped out.

Then in 2005, one of the guys that I got to know became the head of the arson section of the fire department, and he asked me to come down and take pictures. As a result, a lot of my photos were used in investigations. So I went and got a certification as a forensic photographer, and it morphed into an actual contract with the city to take forensic pictures. Now I'm called out to large-scale incidents with a high-dollar loss or a large footprint, or fatalities.

None of what you just described would lead me to think that you'd have been at that now-famous dumpster fire.

Well, as a part of my job, one of the things you do is keep relationships with people in the field. So that day, I happened to be out with the supervisor for the Hollywood area in his SUV. We were catching calls as they came in, and went to a house fire about four or five blocks away from the Dolby Theater. Someone left something on a heater, which was odd that they had a heater on in July, but they did. Then right after that, we got this dumpster fire call. So we went to the back of the theater, and here was this dumpster. The fire engine was a couple of minutes behind us, so I had an opportunity to photograph the dumpster when I first got there. And then, as the guys began to bring the engine up and hook their hoses up and get ready to fight the fire, I thought this was a great opportunity to videotape them actually setting up and putting out this dumpster fire.

So the moment that went viral is right then: The fire had grown larger than it was when you showed up, but the hoses hadn't been turned on yet?

That's correct. And obviously, once they got water on the fire, it went out very quick. It went out in seconds.

So this wasn't a particularly dramatic fire? From that GIF, it looks like the dumpster is full of oil or something.

No, it just looked like a bunch of normal trash. We never figured out what caused it, but it could have been a discarded cigarette or oily rags that spontaneously combusted.

Wait, this feels like a moment for a public service announcement. Oily rags spontaneously combust?

I just went to a fire two weeks ago at a hillside home in Hollywood -- one of these big hillside homes that's built into the side of the Hollywood Hills -- that was caused by that. In this instance, the man was redoing all his wood decking and siding on his house, and he had contractors there and they left the rags out, and it's off to the races once those rags start going.

Related: When This Cookie Dough Company Went Viral, Its Founder Had to Change Everything

So here you are: You moved to L.A. to pursue your dream of working in film, and achieved it. Do you mind if you're best known as the guy who took a dumpster fire video instead?

[Laughs] Yeah, it's OK. I don't mind it. I don't know how much people would really identify that video and want to attach somebody to it. I don't know if I can actually be attached to it, or if it's taken on a life of its own.

Does it make you re-evaluate what constitutes a video that people love?

Yeah, it does, actually. It's interesting that imagery that you didn't think would take on a life of its own can take on a life of its own. Pretty much anything can suddenly be adapted or co-opted or become somehow associated with a word, with phrases, with an event. It's interesting how that all works in the digital age -- how visual images take a very circuitous path that you would never in a million years be able to figure out or guess.